I have an attached SSD1306 display in i2c mode that is tested and working in Raspbian.

How to make it work in OSMC?

There must be a manual or some overlay that your supposed to load in config.txt, basically without trying to sound like an ass is to google it

to sound like an ass is to google it

Well we all know that @toast never sounds like it

Seems this is a good starting point 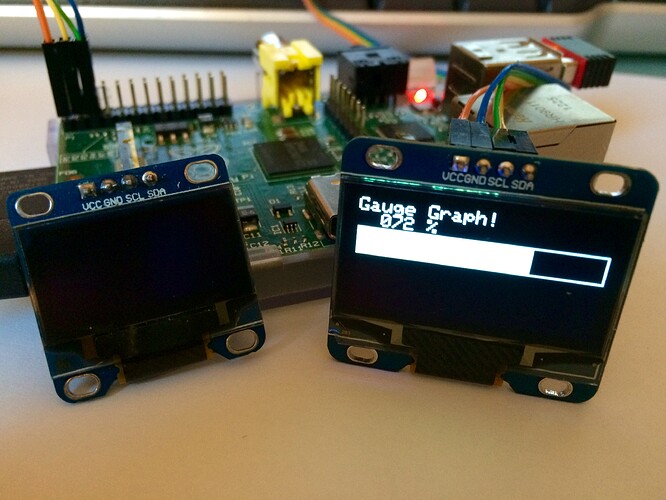 Guess the only step that is different for OSMC is
Enable I2C and SPI modules directly with raspi-config tool
which I believe can be done via MyOSMC instead.

Being away from home, I was curious how to do this from the command line.

Add these two lines to /boot/config.txt:

and this line to /etc/modules:

AFAICT, this should be sufficient. Running lsmod should show three new modules:

Thanks got it to work. Was missing the config.txt and modules lines.

As an added note, I needed to ssh in as root and figure that out also. And yes I googled that too.

And for those that say google it… I did spent way too much time doing that for this issue. There wasn’t entries for SSD1306 and OSMC. OSMC is not Raspbian.
So putting … Google it in a comment helps nobody unless you did the google and see that there is info there in the first place.

Always happy to be of help. Fortunately, I have a Pi back home running Raspbian, so was able to figure out what raspi-config does.

Always happy to be of help. Fortunately, I have a Pi back home running Raspbian, so was able to figure out what raspi-config does.

Still wondering which of that step is not possible via MyOSMC?

I have no idea since my TV is far, far away. I was just curious to know what raspi-config does - and I hope it’s a useful reference for others.

raspi-config does nothing in OSMC. It is a raspbian command.

It looks like you’re familiar with Raspbian, or following a Raspbian tutorial.

OSMC is a media center operating system, and as such, we do things a little differently.

You should find all the options to configure your Raspberry Pi under My OSMC. If anything is
missing or you have any questions, let us know at https://discourse.osmc.tv

raspi-config does nothing in OSMC. It is a raspbian command.

Indeed so. I suspect you missed the bit in post #6 where I said:

I have a Pi back home running Raspbian, so was able to figure out what raspi-config does.