Just finished setting up OSMC on a RPI 1 with 353 mb ram.
Somehow the CPU load is at max almost all the time. It’s been on for a few hours now, but CPU load still at max.
Any ideas? 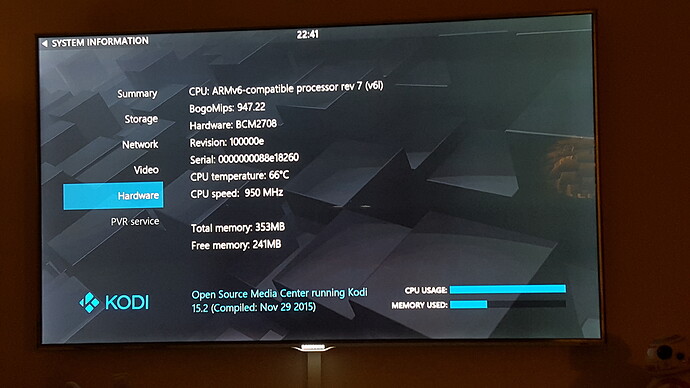 Is that confirmed by checking top command in SSH?

No, I’m not that advanced. However I did notice that when doing something else with the RPI, than watching the Hardware info page, the CPU temp dropped. But staying on the Hardware page makes it go up to 70 Celsius .

After being away for while and came back to hardware it was at 57. Maybe it’s the hardware page that makes it go high?

The rest of Kodi fell ok to be a RPI1. Ok speed in menus and such.

That hardware screen has the tendency to use lots of CPU. If you are using windows, get PuTTY and then you can ssh into your Pi and run the top command to see what the usage really it.

As @bmillham said, the act of redrawing that screen constantly drives the cpu usage up so the usage you are seeing there is invalid. Run “top” from an ssh session to see real cpu usage

They should still fix that to only update 1Hz and only redraw the changed parts.

I’m sure Kodi is well aware of the issue but would probably be glad to receive a pull request.