Instaling OSMC on my USB drive

Hello!
I have been playing around with OSMC on my RPi-2 for a couple of days and have been loving it. I recently bought a SanDisk Extreme USB 3.0 drive, and research showed me that it’s very fast.

I was thinking of installing OSMC on the USB drive because of the advantages that that gives. The reason that i got this fast USB drive is for storing and transfering movies very fast.

So my question is, can I instal OSMC on this USB drive but then still be able to use it as a normal USB drive for storing movies? So for example, i would install OSMC on it, and then also store movies on it so that i could play the movies off of it on the RPi-2 or anywhere else. Will the OS take control of the whole usb or can i still use it to store movies, and can you actually play movies on OSMC from the same drive that the OS is installed on?

And for the SD card, i am going to use a normal 4gb transcend microsdhc card. Is this good enough? Is it meant to be empty so i can boot the RPi-2? Or do i have to install OSMC on both the SD card and the USB drive so that i can boot it.

I know there are other posts on this, but i didn’t really find the answer i needed in those.
Thanks for helping, Sal.

Just use one of our installers to image the SDCard with the USB option selected. Then boot the pi with this SDcard and the USB connected. The whole drive will be available.

@ActionA - Would you be so kind to elaborate more fully on this answer?

For the end-user that wants to run OSMC from USB on RPi are you telling him/her to: (while using an OSMC installer)[see attached image]

(confused) based on the attached screen shot.

My understanding is the RPi requires an initial boot (likely inaccurate terminology) from the SD card before fully booting from the USB. I don’t understand how this is accomplished (and @salouha’s question answered) by your reply; then again, I am only non-noobish enough to not use NOOBS, lol. Basically, my understanding of things tells me if I install to only “a USB stick” and not the SD card then RPi will fail to boot. Please inform my ignorance! 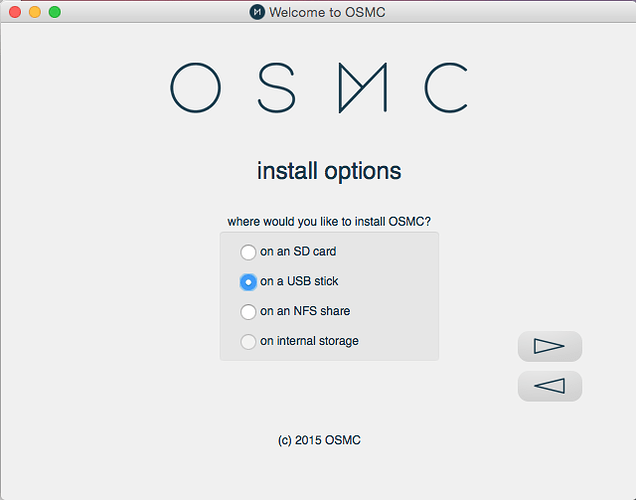 I’m really not sure how to be more clear. Use the selection as indicated by your screenshot to write the SDCard. Then move the SDCard to the pi. Connect your USB drive to the pi and boot.

I’m sorry, I should have written a reply about how I understood @ActionA’s explanation.

So basically, to be able to boot from the USB, all you have to do is use the installer and select the “on a USB stick” option. It basically installs a special version of the image on the sd card just so you can boot the pi.

What I got confused about was that I thought “on a usb stick” meant that I would have to plug in my usb stick and it would install OSMC on there for me, but then I wrote this post because I knew that was impossible because the pi needs an sd card with a bootloader so that it could boot. I think it’s the phrasing and lack of a super detailed (noob style) tutorial on how to install osmc on a usb stick.

So basically, what you do is plug in your sd card into your computer, and you use the “on a USB stick” option to write to your sd. This installs a different image than the normal one, so it’s used as a bootloader and it installs everything on the USB. You don’t touch the USB itself yet.

Then, you plug the sd card into the pi, along with your USB drive(which should be formatted and empty). Then, you boot the pi, and it allows the software to be installed on the USB.

That was it, basically. I hope i helped!

your USB drive(which should be formatted and empty)

Nah… No need for these steps. The system will handle this for you but be aware, all data on the USB prior to this initial boot will be lost.

Thank you kindly @salouha, this made it very clear.

It’s slightly counterintuitive to select the “on a USB stick” option while choosing a SD Card as the destination.

I look forward to having this all up and running.

Hopefully it all goes well. I ended up choosing to do a normal install though. The USB I use only to store the movies on, then I put that in the pi and use it to play videos. I realized this worked for me and that I didn’t need to use an entire expensive usb stick for the software, as the sd card is already really fast.

I hope your setup works too!

Does installing on USB gives you any added benefit as compared to running it off SD card. i would also like switching over to USB.

Also if the USB is formatted during the installation process, will it still be readable on windows for copying movies / files?

If you take the trouble to read this thread, to which you have appended after some 8 months, you will see that it gives no noticeable benefit.
I haven’t done one of these installs ‘on’ usb stick, but would assume that it would get the whole stick formatted by the install to ext4 (not directly readable by Windows).
You alway have the option of accessing the user section of the usb stick over the network, which bypasses the format difficulties, as the filesystem is only read/written by the local OS.
Derek