Hey guys,
As always I hope everyone is going great.
I have another small problum that I’d really like some assistance with, please.

For some reason or another any new movies/TV shows I add/scan to the library doesn’t show any plot summaries or descriptions.
In the attached photo you’ll be able to see that basic info is shown like; year, actors, director. While excluding the plot… I have tired changing the scrapper source as well as completely resetting the Vero 4k+ about a month ago too.

Anyone have any ideas?
If needed the logs can be found at: https://paste.osmc.tv/zowecumoka

Many thanks in advance! 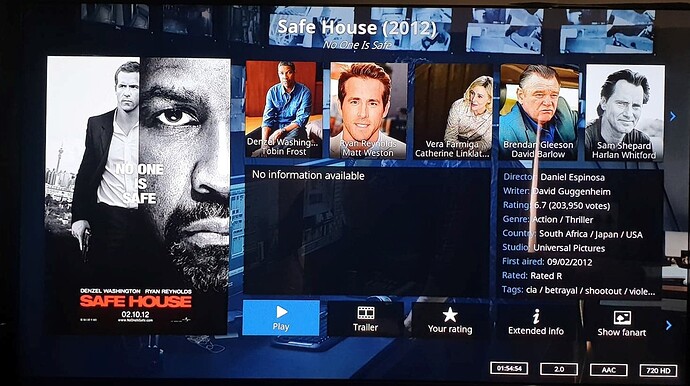 3.5.9 is the current version. You will need to update the add-on and refresh any of the shows that were not scrapped correctly.

I don’t remember a similar issue with movies but the last version of TMDB TV show scraper had issues which I thought included missing info. Are you using NFO files? If not, what language is your scraper set with?

I tested scraping that movie “Safe House (2012)” with both TMDB and the Universal scraper and did not find any issue. Your logs seem to indicate that there exists a NFO file which would override the scraper unless it is a parsing NFO. I would suggest to look into that as we have seen programs that generate erroneous NFO files with auto downloaded content. I also noticed that you have paths being listed such as smb://192.168.1.9/Movies/MOVIES/TV-SHOWS/ which is problematic if you have TV show source path inside of a movie source path (or vice versa). They can both be in the same share but there will be issues if they are nested.

ahh I see. All those NFO files where left over from the previous OSMC before I had reset the system.
I’m guessing that I would have to go through a manually delete the files one by one, or would there happen to be a way to remove/ignore them through OSMC?
Re: TV shows. Thanks for the tip, I’ll move and separate both the movies and TV shows in separate shares.

If you were in Kodi then yes one by one which would be less than ideal. A more effecent way would be to just search the share on a PC for “*.nfo”, select the results, and then delete.

As I already stated they don’t need to be in separate shares, just not nested inside one another. If you had…

Well this proving to be annoying. Ahah
After creating and moving all the TV-Shows into a seperate and newly created share (just to be on the safe side), removing and deleting all the NFO files that were saved on the NAS, cleaning the library and refreshing everything, I’m still not getting any plots showing up.

You wouldn’t happen to have any other tips at all?
Cheers

Logs after running a scan may help us see what’s happening.

Off the top of my head I would suspect that you did not remove as much of the defects in your database as you think you did. You would likely be best served just starting over with a clean database but as a more conservative approach you can take a single TV show, bring up an info window on the show (not an episode) then click refresh, all episodes, ignore local, and then let it scan does the proper information show up?

Hey guys,
Sorry for the radio silence!
I had only just released that kodi was scanning a hidden restricted admin recycle bin and was picking up the NFO files from there.
I moved things around and decided to place things into separate directories and just started again.
All working now!
Thanks everyone for your help & I hope you have a very merry Christmas!

I had only just released that kodi was scanning a hidden restricted admin recycle bin and was picking up the NFO files from there.

I’m glad you got it going. Whatever the issue I’m not so sure that was it though as Kodi only reads NFO files that are in the same folder as a file that shares the same file name as the video (except tvshow.nfo). The recycle bin would be a good reason to not use a drives root as your share/source though.