My open-elec distribution for my Raberry Pi 3 died after an update. It was crashing so bad during playback that I thought maybe the memory was bad. After several days of messing with it I gave OSMC a try and it works perfectly!!

Here’s the funky issue, I send my audio out via HDMI to an splitter that separated the audio into optical audio that feeds my stereo head. Previously with open-elec it would read 24/96 flac >PCM files just perfect. The amps on board DAC would signal 96k to let me know it was seeing the hi def signal. THis worked flawlessly for a long time, so I know it’s not a hardware issue. What am I missing to get OSMC to put out the correct pcm for audio?

Presumably you’ve tried all the options in Settings-System-Audio-Output configuration?

Yeah first thing I did was run through all the options there… here’s the RUB on that though. under setings>System>Audio the “Passthrough output device” section is greyed out.

So I can’t mess with that. It’s locked on HDMI so I think it’s ok.

first thing I did was run through all the options there

So if you set it to Fixed and 96kHz it still doesn’t work? 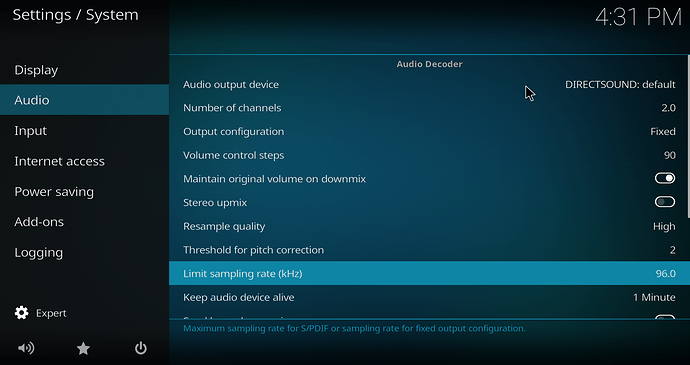 I’m not sure I have that ? … when I get home from work i’ll jump on …hmmmmm

HI … so I didn’t realize there was a basic, advanced AND expert system settings. So I played with setting fixed to 96K and didn’t get anywhere. Still doesnt seem to show up on my amp. I tested my broken install of open-elec and it’s working fine.

I don’t know how kodi talks to sound devices but suppose it uses alsa. OSMC doesn’t use pulse by default. I would start by digging around in the alsa configuration files in your OE and seeing if anything is obviously different in OSMC.

As I understand it, alsa asks each sound device what bitrates etc it supports and should send a signal at a supported bitrate rather than re-sampling it. Could be there’s a lack of communication between your amp and OSMC (through the HDMI/optical switch). Some pitfalls in this process are explained here.

Having said that, maybe HDMI is handled differently. I can’t get any sense out of /proc/asound/card0/pcm1p/sub0/hw_params where normally one would get some useful information.

Conquering linux audio is not for the faint-hearted - I’m only at base camp in that area - and interested in finding out more but it might take me a while.

I got the feeling it was using something other than alsa. Using alsa sound vs hdmi sound is a choice in audio settings.

This works perfect in open-elec Kodi, Everything over here on OSMC is way better than open-elec except this one issue.

Somebody must have had the same issue.

Somebody must have had the same issue.

Only those who think 96k is at all different from properly reconstructed 44.1/48k. But lets not go there.

Somebody in here must know how kodi talks to Pi HDMI. On my laptop HDMI is through alsa and pulse. I can’t test as I don’t have any HDMI devices which can accept 96k, only soundcards where we would be back to alsa. Could @sam_nazarko give us a quick steer?

“Only those who think 96k is at all different from properly reconstructed 44.1/48k.”

I won’t necessarily disagree with you, I do think there is something to HI-Def audio with the right equipment, but at this point it’s more of an annoyance, looking up and not seeing the 96k on my stereo.

Just a thought: you have selected HDMI only for sound output? Kodi reports the analog[ue] output supports only 48k so if you select both it may be choking the HDMI to the same bitrate.