I recently let the system do its usual updates, and then shortly after I shutdown the system via the usual GUI power off menu. Since then it boots to a sad face after some text, then the sad face screen blanks and returns every few seconds.

I am unable so ssh to the pi; I don’t think it gets far enough into the boot process for the network connection. If there’s a way to force a boot to the command line, I haven’t found it yet. Since it’s running from the USB drive, however, I can get to the logs that way, I believe. I don’t know which logs I should share, though, or where to look for them.

I’ll reinstall if I must, but I would be very happy if I don’t have to since I have pretty sizable library with a lot of custom fan art that I would rather not curate all over again.

Just in case it’s relevant: The setup accesses my video files over SMB from my NAS drive, while my music is stored locally on the USB drive.

Thank you for any help you can give. I promise that before I posted this I looked for other posts that would help, but nothing I found worked for me.

Since then it boots to a sad face after some text

So the text comes in these two chunks in this order. There is a small chance I missed a line or two before the screen cleared to load the next screen, but I’m pretty sure this is everything. After these, it’s just the sad face on a ~5 second loop. [PrePost Edit: As a new user, I’ll have to put these in separate posts.] 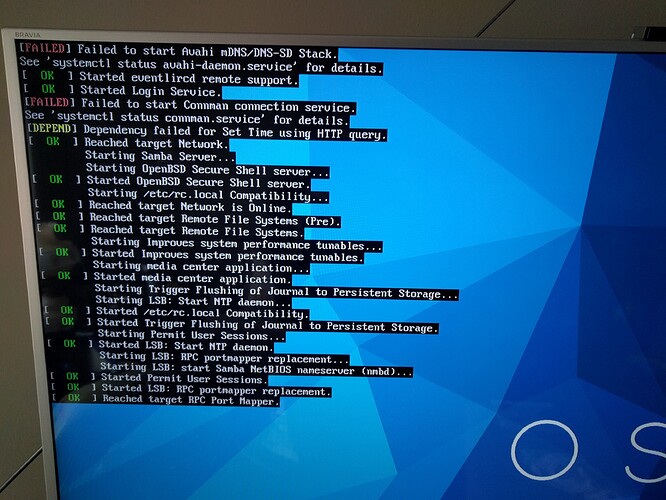 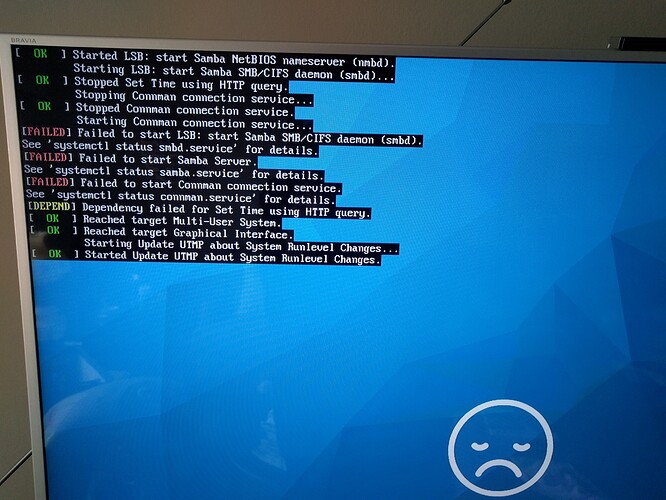 That is a strange problem you have there. Can you remember what version you were on prior to upgrading ?

The root cause of the problem seems to be that connman is unable to start - this is the network manager, so without it your network will not come up. I can’t think of a good reason why it would fail to start though.

About the only way you could capture a log would be using a keyboard - so try plugging a keyboard in, and when you see the sad face appear, press the ESC key - this should bring you up to a login prompt.

See if you can login with osmc for the username and password. If you can, run the following command:

This will grab all debug logs and save them to the FAT partition on the SD card instead of trying to directly upload them to our paste server. (Which would fail due to no network connection)

After that type poweroff to shut the system down, then turn off the power and remove the SD card to put it into an SD card reader in your PC.

Then please paste the contents of uploadlog.txt into http://paste.osmc.io and provide us the URL it returns.

I hope this helps. Thank you again for your time.

There seems to be quite serious file system corruption on your system causing crashes, such as:

libdbus is a core system library in Linux - without it lots of things won’t work. Unfortunately you are probably looking at a re-install, and I would be suspicious of your SD card if the same problem happens again as there is nothing in the log to indicate why things got corrupted.

For the record, what make and model SD card do you have ?

Edit: my college has just pointed out you have a USB install, so the issue will be with the USB pen drive, not SD card, my mistake. What model of USB pen drive is it ?

For what it’s worth, so is the initial microSD (8 GB) card, see here:
http://www.microcenter.com/product/366174/8GB_microSDHC_Class_10_Flash_Memory_Card

I’ve been using their storage media pretty much since the first Pi came out, what, four years ago? I haven’t had problems with them yet, but that’s not to say that that can’t be the issue. If you think it would be worth it, I could splurge on a name brand drive/card.

Also, if there’s anything in the logs to indicate what I might have done to cause the issue, I’d be keen to avoid doing that in the future. Like I said, I’m certain that I shut it down via the GUI, but that was right after and update/reboot, so if there were still updatey things going on in the background then I may have interrupted them. Oh well.