I think since I’ve upgraded to RC3, I’ve been having problems with black bars at top and bottom when I play 16:9 content.

This can be compensated for in Video > Playback, and that’s what I’ve been doing, but it causes problems when you play 2.39:1 (Theatrical) or 4.3 (SDTV) content.

We haven’t changed anything specifically here.

We haven’t changed anything specifically here.

Not even in the way that Video Calibration works?

For anyone else having this problem I recommend setting up Video Calibration with some 16:9 media playing, especially where you’re asked to make the box perfectly square. 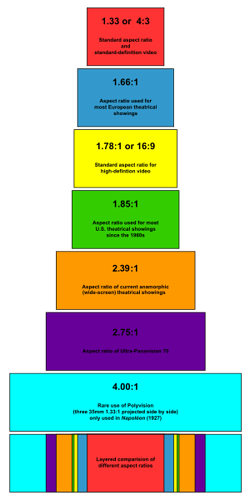 1.1.19:1 (19:16): Sometimes referred to as the Movietone ratio, this ratio was used briefly during the transitional period when the film industry was converting to sound, from 1926 to 1932 approx. It is produced by superimposing an optical soundtrack over a full-gate 1.3 aperture in printing, resulting in an almost square image. Films shot in this ratio are often projected or transferred to video incorrectly using a 1.37 mask or squashed to 1.37. Examples of films shot in the Movietone ratio incl...

I don’t suppose you use overscan settings in config.txt ? If so check this post by popcornmix about recent firmware changes:

The normal overscan_left/overscan_right/overscan_top/overscan_bottom only apply to the framebuffer (e.g. console and X gui). They have never applied to other overlays, like video or opengl (which are used by Kodi). overscan_scale=1 is a hack that I don’t recommend using. It attempts to scale all the other overlays (including video and opengl). But it is a bad thing to do as the host application doesn’t know about it. Lets imagine you have a native 1280x720 display, but it is badly set up such …

In all likelyhood you had enough overscan/zoom before to crop the sides off 1.85/1 and/or 2.35/1 material so that you didn’t see bars at the top and bottom.

The video that finally put me over the edge into fixing the problem was 4:3, I was using the setting to eliminate black bars and it worked great with 16:9.

Is there a problem with my config.txt? I haven’t changed anything except for max_usb_current. Should I be making overscan changes there instead?

It should be noted that I’m using a fairly old Rear Projection HDTV. As far as I know there’s no way to change overscan settings on the tv.