LG OLED’s also have a Screen Saver as well that turns itself on automatically after ~ 2 mins if static images are displayed on screen.

You mean the fireworks? That screensaver doesn’t turn on when you’re viewing HDMI, only on internal apps.

@OP: I also enabled the “Black” screensaver in Kodi in combination with the dimming option and set it to 2min. I have over 1500 hours on my OLED+Vero4k and no burn-in whatsoever.

In 2018 I also had to make the choice and after owning a few (Vizio) LED sets I opted to pay more and switch to OLED. I did so because screen (grey) uniformity issues were making me nuts and I couldn’t ‘not see them’ no matter how hard I tried. The OLED has similar issues but only at about 5% grey and the blacks and details in dark scenes are much better.

I transitioned from a 1080p Panasonic plasma because back when plasmas were available I always preferred their pictures to that of LED. It’s the same with modern OLED and LED though the latter keep getting better and I do have one upstairs that work’s well for my wife’s less demanding viewing.

Thank you Gents for all the feedback. It’s certainly helped me make up my mind - to go under the duvet and not surface till the next generation TV’s come out

Joking aside, seems pretty much of a consensus that OLED, despite its flaws, is still the best tech all around. The Samsung Q9FN is the only non-OLED that comes close. It’s better for overall & peak brightness and more able to handle HDR mastered above 1000 nits in theory but OLED’s black levels mitigate a lot of that. HDR colour volumes on the Q9FN is also significantly better at peak brightness.

So, swinging towards OLED again - but anyone have any comments on ABL? Little worried that for predominantly bright outdoors scenes etc the ‘pop’ wont be there when ABL kicks in? In the showroom they had an LG E8 playing demo material and it looked fine but side by side comparsion with a Q9FN was not possible (a way distant from each other and playing different material).

For example, something like Mad Max Fury Road which as eyeball searing visuals - would that be noticeably worse in an OLED.

Edit - just popped into another showroom where they had a Sony demo playing on all screens so got a chance to compare a Q7 and C8 next to each other. At one point, the demo switched to ann white screen and it was noticeably dimmer on the C8 with a greyish tint.

The LG E8 is 3K GBP equivalent here with 400 GBP vouchers so works out same as Q9FN. Surprisingly a C8 is more expensive than an E8 - HK market!

I have a C8 and it has a pixel recalibration facility. Would that “fix” any burn in to some extent? There is also a function to dim any static screen logos such as channel etc

Those do not help much. There is a burn in test by rtings.com you can review. They have multiple content running on 6 TVs (c7) and they report state each week.

I have a C8 and only use it for 3 things: Vero (Movies and TV eps), Basketball games, and Wii U.
I have not experienced any issues.
Obviously mixing up your content helps prevent image retention or burn in.
I was an early adopter of plasma and everyone was worried about that then too.
All I did was play games, watch movies, and the occasional basketball game.
After 10 years of use I had zero burn in.
The only thing I would fear is accidentally leaving your tv on over night with a static image.
I did that once with my plasma and it had image retention for about a day or so, but then it went away.
For my C8 I have the screen saver set to turn off my TV.
So if I fall asleep while watching something then the longest it sits on a static screen is a couple of minutes and then it shuts down.

Here’s what I got if it helps at all: https://youtu.be/TdqgCgOSti4

So I finally made my mind up. And the lucky winner is : Samsung Q9FN.

Things that bug me about the Q9FN:

@sarit.shah Let us know your thoughts on your new TV when you get it.
I’m in the market for a new one and can’t make up my mind whether to go for a Q9FN or an LG E8 which are both the same price here.
As I’ve only just this week decided to get a new TV you have done more research than me so maybe you or someone else in this thread can tell me is there any difference between the LG C8 and E8 other than sound?
I’m probably going to buy a new AVR too so if its just better sound on the E8 I can save £100 if a decide to go the OLED route by choosing the C8.

Since I have OLED at home, I can see LED on first sight. I bought 65" c8 for ~2k eur. For the price I do not care much about burn in. I would go with q9fn if it would cost the same. But I’m not convinced about that too since I saw this in our office (2yrs old Samsung) 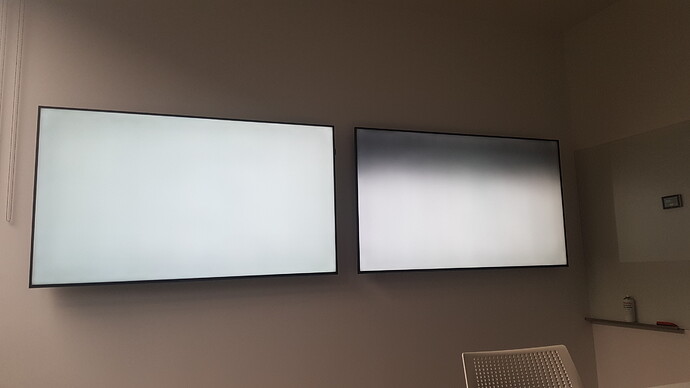 Since I have OLED at home, I can see LED on first sight. I bought 65" c8 for ~2k eur. For the price I do not care much about burn in. I would go with q9fn if it would cost the same.

I’m limited to 55" due to space restrictions, Q9FN is £1799, LG E8 £1799, LG C8 £1699, these are prices from reputable outlets, cheaper prices are available from places I’ve never heard of.
I’m also tempted by Philips OLED which use an LG panel, have Ambilight and get great reviews but don’t seem from my limited research so far to have Dolby Vision.
Whilst picture quality is my most important feature and at least 50% of my viewing will be via my Vero so the best Vero 4K+ picture is very important there are also other factors, I like LG’s webOS which seems to be maintained for the apps on it I use very well, whereas I often read about apps on Samsung TV’s not working and Android TV on the Philips fills me with dread.

I bought it on black Friday. I would wait a bit for 2019 models, so 2018 models price will drop. I use my TV as display for Vero only

Only difference between C8 and E8 is sound and design. I quite like the picture on glass look of the E8 and the back is neater too.

I have done tons of research but basically boils down to real blacks on OLED vs better HDR on QLED (for bright scenes & highlights). Plus ABL kicking in on OLED. NB some Q9’s suffer from horrid DSE (panel lottery) but only really noticeable on hockey (most) and footie.

Then there is the dreaded OLED burn-in - which may or may not be a problem
depending one’s viewing habits.

Since my viewing ranges from daylight to v dark rooms I went for QLED. If I had a man cave (impossible in HK unless one is a billionaire tycoon) then I would possibly go for OLED. But that QLED HDR … round and round we go

PS if you do go for OLED then the Panasonic is the best there is.

PS if you do go for OLED then the Panasonic is the best there is.

Yes by all accounts. Uses LG panel but Panny processing is better. Closest to reference. 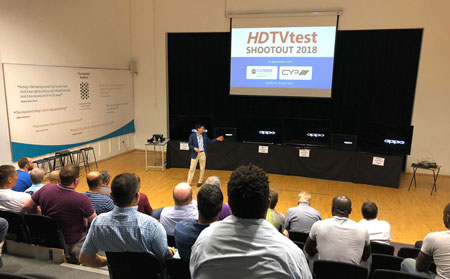 Four TVs from LG, Panasonic, Samsung, and Sony were competing 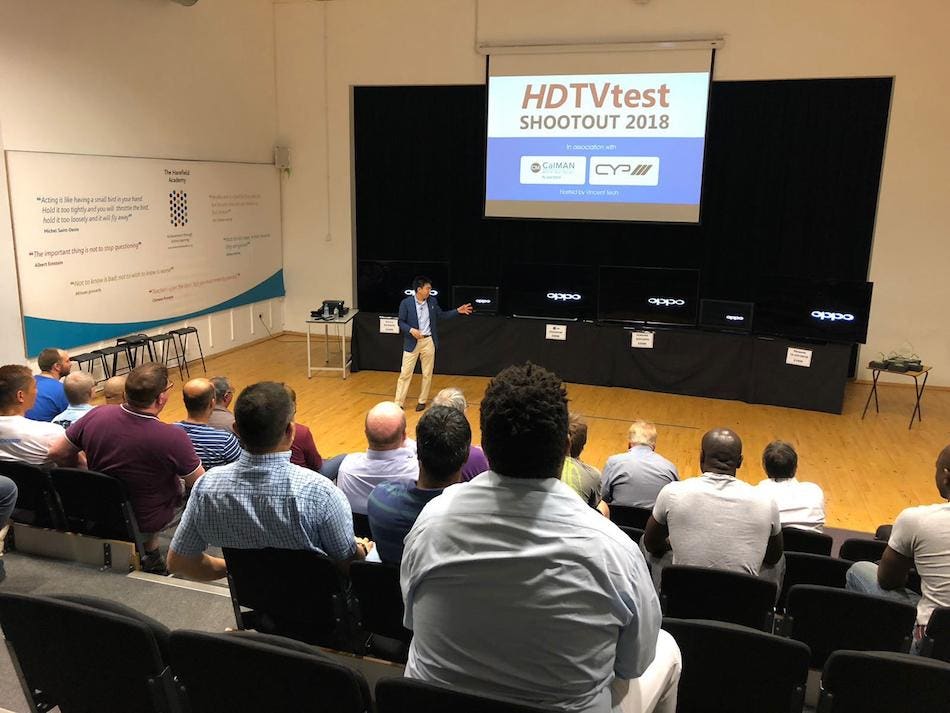 Not available in HK sadly

Thanks @sarit.shah but I have decided with no-one knowing yet what is going to happen post Brexit and as I work for a European company buying a new TV now may be a bit fool hardy and the money is probably best left in my bank account for a rainy day for the time being,
especially as I’m going to buy a new AVR (which is more needed than a new TV).
Come April I may well regret two major purchases right now.

Anyone know if there’s an easy way to dim/darken the white of the pause bar through the settings?

I’ve already made the OSD that surrounds it transparent black and have the screen set to black out instead of dim when paused but i’m thinking that all the minutes the pause bar is visible before the screen goes black is going to add up over time. Especially as i watch a lot of HDR content which makes it a really it a really bright white.

It depends on what skin you are using. Some skins allow you to change almost every color.

Also, set the screensaver timeout to 1 minute…the Vero wakes up very quickly from screensaver, so I don’t find the quick timeout irritating.

I’m using the default OSMC one.

Already have the screensaver set to 1min, as i said i have it set to black out even on pause. My concern is the white pause bar over however many years. I want to dim that element specifically.

Because it is the OSMC skin, there’s nothing you can really do except submit a feature request for changing the color of the bar. You could hack the file that controls it in the skin, but you’d have to do that every time there was an update.

I play video games a LOT on my C7 OLED. I also watch movies a lot, and foreign movies a lot.

1.) Zero burn-in.
2.) I have maybe seen the ABL kick in ONCE in the year and a half I’ve owned my C7, and I’m very sensitive to everything a/v related. I’ve induced it by pausing content for long periods of time, but that’s a non-issue, of course.

Both these things are going to be a non-issue for 99.9% of owners. There will always be fringe cases.

But considering I have over 1,000 hours just in PUBG gaming which has a lot of static content (map, colors health bars etc), I think it really is a non-issue for most.

I couldn’t go back to anything non-OLED, personally.