I have 3 Raspberry PI’s running OSMC, and I have bought 3 remotes for them. They are the “DIGIFLEX USB PC Computer Remote Control Media Center Controller” on Amazon UK.

They come with an IR sensor that takes up a USB socket, and they’re pretty basic and non-programmable. 90% of the time they’re fine for moving up and down the menus, pausing, stopping, playing and fast-forward/rewind. Plus because they’re an all-purpose PC remote they have a lot of buttons that you wouldn’t use on OSMC, like numeric keys and “Email”, that just clutter things up (especially if you’re watching in low light).

Also not so good on the right-click menu and their mouse emulation is a bit clunky. Having said that, they’re only £5.99, very cheap and cheerful, and were the quickest and least expensive way to get remotes for all 3 Pi’s.

I’d like something possibly with light-up capability, more programmable, and with a button for context menu. What remotes have you bought that you can heartily recommend (with price)? I’m interested in UK, but obviously feel free to include US etc for any users in that country.

I’m looking at the OSMC remote control. I notice it has mimimal buttons, which would make it easier to operate in low light, but does it have a context-menu key and “skip” as well as “FF/RW”?

but does it have a context-menu key

It does, it’s the one that has three lines.

To skip forward or back, you can use the < or > arrow to the left or right of the OK button. Depending on how quickly you press these, you can control how far to skip ahead (seek steps)

I’ve seen some forum posts successfully getting the old “Classic” XBOX DVD Remote working on OSMC on the Pi. I’ve got two of these, and since both my old XBOXs are now obsolete (thanks to the Pi and OSMC), I’d like to have a go at using them.

Can anyone advise me how to get round the weird proprietary XBOX USB connector? I’ve got two IR sensors but they won’t plug into a standard USB. You can still get Male XBOX to Female USB connector leads (I’ve got two), but Female XBOX to Male USB are rarer than hen’s teeth. I guess this is because hardly anyone wanted to plug their XBOX controller into a PC.

Alternately can I just use an alternate IR dongle and somehow configure the remote to use it? I’ve got an OSMC remote arriving in the post, but I’ve got 2 other PIs and these XBOX remotes would be perfect.

The other alternative is to get an IR diode to act as receiver, and plug it into the GPIO connector - I’ve done this to replace a USB receiver for one of my remotes, and its lots of fun (if you don’t lose heart).
I think I found a way of setting up the maps and recommending diode types on one site,and also this site, but you have to work around OSMC.
Derek

Kodi offical remote app for android and ios phones. Once you learn to use all the feature it has pretty much everything you need. That said my surround remote works because of the cec link in the surround sound and the pi. You can get the keymap addon through the kodi addons and map the keys how you want them. If you have cec link on your tv or device the hdmi is connected to then your remote options open right up.

Yes I’ve used the CEC on the Samsung TV downstairs and it works perfectly. Unfortunately the “Bush” TV upstairs isn’t actually a Bush. It’s a crappy rebadge, and although it does have CEC built in (the old version of Raspbmc picked it up), there’s no actual menu item on the TV to enable it!

I do use Yatse on my phone, but because I have my screen set to lock after 2 minutes for security reasons it’s a pain to keep having to punch in the screen code every time I want to use Yatse. A hand-held remote is easier.

seriously get the keymap add one. I didn’t have a context menu button on my remote and I used it to set one. Super easy.

Ive used both and know there are a few other similar models, some even are bluetooth so dont use up a usb port on the pi3. Of these two i prefer the iPazz because the Rii goes to sleep mode after ~5 min and takes ~5 sec to wakeup which can be irritating. Both have good battery life, 2 weeks between charges at least. Down side of the iPazz is the rf dongle is cheaply made, i had 1 splinter to pieces but still using it helded together with electrical tape. Moral of that is plan to be careful with it and limit plugging/unplugging it often. What u get is a nice sized remote KB with arrow and volume control buttons, u cant get better control of OSMC then that for its price i think. I often wonder why so few people seem to use these, to me they are awsome at a reasonable price .

Well I bit the bullet and bought the OSMC remote from the shop here and I must say I’m glad I did. I tend to watch most TV with the lights off and quite frankly my original remote was a pain because of all of the buttons and I kept hitting the wrong one when i wanted to pause or FF. The OSMC remote is a vast improvement. It has far fewer buttons, but for playing of videos/music and navigating round the menu it’s perfect.

I’m particularly delighted with the Info and Context menu buttons which are (respectively) a boon for checking the remaining play time, and for queuing up tracks, both of which were missing from my previous remote. It was smaller than I had imagined, but I now realise that size isn’t important (ha ha) and with pared-down controls it’s incredibly easy to navigate by touch for semi-darkness operation.

I was initially dubious about the infra-red dongle as my Pi is nestled under the TV and with the USB ports at the back I might get some dead zones, but that isn’t the case. The IR seems to have a very wide field of reception and picks up the remote no matter where you are and no matter how far away.

It works straight out of the box and absolutely no configuration needed, so my original plan to get my old XBOX remotes working is now obsolete. Heartily recommended!

If you bought the black OSMC remote, it is not infra-red - it is RF (wireless) and so does not need light of sight, so it doesn’t matter where you point the remote or whether the receiver is obscured or not.

The older white OSMC remote was IR based and so did need line of sight from the remote to the IR receiver. Glad you like it.

I am using the remotes of Netgear EVA 8000 digital entertainer.
Working well. I only had to train them via ssh and well known liirc training and I didn’t followed the key labels exactly, but assigned the disk-eject button with context menu.

The reason was simple:
EVA8000 can be found at ebay for below 20€ (incl. shipping) and has a high woman’s acceptance factor (WAF). So I bought EVA8000’s, removed the bowels, put in all I need and a RPi. Having some of it in between

but this is another story… 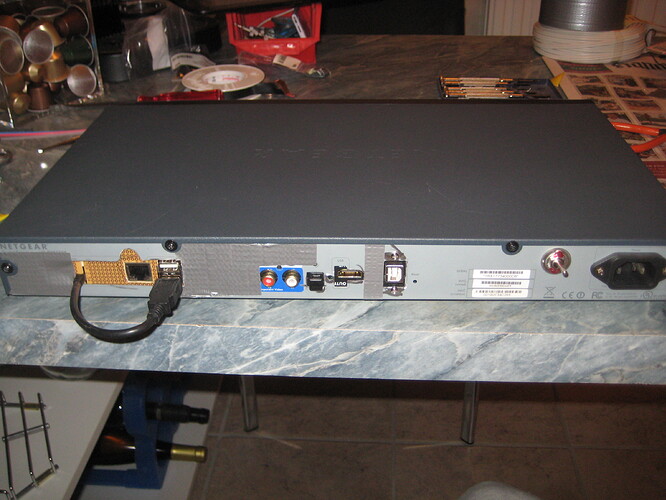 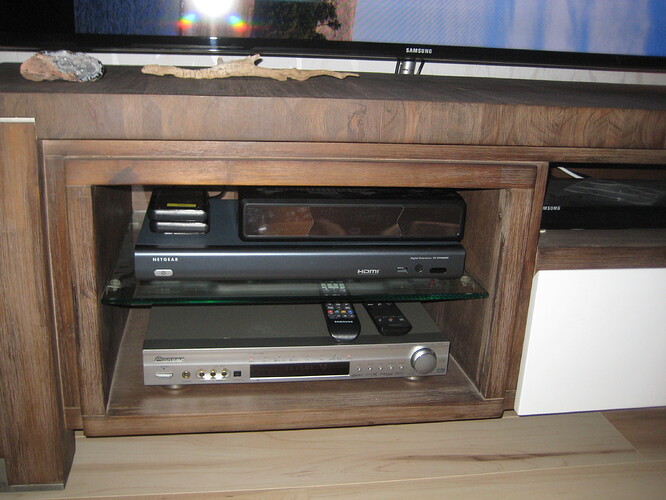