3D MKVs freeze up, only when seeking

Sounds interesting … I tried editing the advanced settings.xml with the following result (some other stuff in there too, relating to an add-on)
Does this look right? 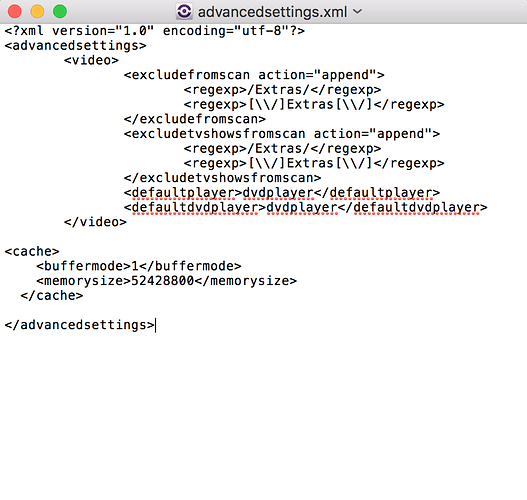 Looks ok, except I don’t know if it makes any difference or its just for neatness or readability; it should be tabbed out like this:

Also I’d tempted to adjust the readfactor. I’m using this on my pi3s:

You’ve mentioned that the audio codecs are all different, what about the video codecs for 3d mkvs?

It’s me who says thank you, Tom

I tried checking Mediainfo and made a comparison, but there seems to be no significant differences between all the files that freeze up and the one that doesn’t …

The only differences I can see are:
ReFrames, most are set to 4, one is 2 and one is 3, but the one file that doesn’t freeze when seeking is set to 4, so …
Then there’s video bit rate ranging from 16 Mbps to 30 Mbps, and the winning file is at 19.6 Mbps, so it doesn’t look like a question of too high bitrate either …

I think I’ll try and remux one of these guys into a m2ts container instead and see if that changes anything.

It could be the ReFrames, but just co clarify the video codec is the same for all those causing issue?

Yup, AVC all across the board …
But how can it be ReFrames, when I have 4 files all set for 4 ReFrames, and 3 of them are causing the issue, but a single one isn’t?

Sorry I miss read what you reported the bit about reframes, I thought the one you wasn’t having an issue with; had a didn’t reframe.

I would try remuxing, and see if there is any difference. Could be a codec issue.

And THAT apparently did the trick …
The MKV file playing, when I made the log further up, was remuxed to m2ts, and now plays back nicely like before, but also doesn’t freeze up when seeking.
This is in 2D mode, however, as I’m still waiting for my new 3D projector, but I’m assuming it’ll work in 3D too. I’ll post on that later.
So right now it looks as if we’re dealing with some kind of MKV-related issue, am I correct?

Could you please provide mediainfo the m2ts, I can play mkvs on my pi, with no issue.

I’m not sure how changing the container has resolved the issue, perhaps there is an issue with MKVs.

Absolutely, I’ll test it for sure. But for me, just using m2ts is really ok. As I see it, there’s no huge difference or particular advantages to MKV over m2ts, unless I’m missing something?

You are correct, there is no real difference. It was just a suggestion.

And a suggestion, I’ll follow, when the time comes

Thank you so much for your time and input, I really appreciate it.

OK, a small update here to this MKV-freezing-when-seeking-in-video-thing:

Thought I had it all cracked when remuxing to m2ts, and it really does work as far as browsing through the video goes, BUT …! Now I’ve got my 3D projector back and now it seems that these remuxed m2ts files have another thing with them now, which is in fact the same issue that prompted me to try remuxing a 3D BD ISO to MKV, and that is a form of momentary flickering (every 10-15 seconds or so) throughout the movie. It kind of plays back ok, but it looks to me like some kind of sync/frame rate issue, as the flickering seems to be the glasses trying to keep up, like the playback isnt 100% stable.
This never ever happens with the 3D MKVs, so I decided to live with the freeze-up issue to get flawless playback without random flashes, as the glasses randomly pop out of sync, or so it seems.
But of course, to have flawless 3D BD ISO playback would be even better.
Any thoughts on this? Anyone tried something similar like this flashing stuff with 3D BD ISOs?

I know ISOs can be read slower, which could cause less stable playback than straight MKV or M2ts (never had trouble with regular 2D m2ts, by the way …), but I wonder if it could be the combo of m2ts and MVC, that is screwing something up?
If its a raw speed issue, could overclocking do the trick, or is it a programming issue?

I also have this problem, was there ever a solution?

I don’t think so.

I’m not sure what the state of 3D MVC is on Pi now.

Hi Sam, my Pi was still running a Kodi 17 build - I’ve updated it to your latest update and seeking now works fine and 3D works the same as it always has.

Glad to hear. It’s been a while since I tested this on Pi