ok so i wanted to gather a list of items people have updated their atv1’s with, as well as a part # listing so us others who have not upgraded anything yet can in the distant (this weekend

ok so i see people who have upgraded to the crystal card, and i do believe there is a newest version right?

benefits of this card?
it doesnt allow wifi does it?

also is an ssd worth it, or would a internal micro card be a better cost worthy addition?

is there a certain speed and or size best for either an ssd or internal micro card?

any others you guys have added such as:

let us know so we can all upgrade these as much as possible!

I’m thinking about putting a solid state drive in my ATV1, if the pending OSMC release goes as well as I think it will. I’m wondering what the best options are currently. Some of the suggestions I’ve read about include the Intel X25-E, mSata drives with Pata adapters, etc… I just stumbled on to something new to me that seems like it could be a nice inexpensive option… and that is a horizontal “Disk on Module” but I’m having a hard time finding any discussion about using these in an ATV1. Anyo…

feel free to add to this and maybe perhaps it can become a stickied thread?

Ok i guess im the only one looking for part #'s and stuff then?

What crystal card works the best in this appletv1?

thank you very much!!

I’m a total newby who could use that info too…I just purchased an Apple TV First Gen and want to get it going with Kodi. I’m currently using a 2nd generation ATV but it crashes all the time.

I’m hoping for somebody to do a step by step YouTube Video for ATV1 upgrade to OSMC (for dummies…lol) From start to finish, everything one needs to do.

Was wondering what kind of external card I’ll need for the ATV1,The exact model number would be helpful.

I too am worried about WiFi…I don’t have a modem in my living room to hardwire it.

I think I saw a video on how to install the 1080P card and it looks fairly straight forward, but do you lose Wifi with that card? I might just stick with my 1080i picture.

I specifically got this card

after it was recommended by someone else. Works right out of the box and has incredible range. It does 802.11N, but only the 2.4GHZ band.

Hey guys! So i’ve been working on my ATV1 for a few months now (since I found it in a box in my garage) and i’ve done some stuff to it but nothing too exciting. I always get frustrated when things are going slow and I cant help but want to figure out how to solder more memory and cut out that CPU and build a new one lol! but then when things are working well i feel pretty proud.

anyway, the IDE cable from foxcomm became really brittle and finally gave on me this weekend. I’m trying to figure out if its possible to connect to devices to that one i.e. the pata drive as well as a dvd± rewritable i have lying around. I looked into whether the pata port would support a miniPCIe slot but that didnt get too far. Before I got into this project I didnt really know much about components; I’m learning a lot and definitely enjoying it haha. Sometimes its hard to get a question answered for whatever reason but actually come across a lot of people in these forums that have been very helpful! thanks guys!. That said, I really really wish the ATV 1 had two minipcie’s or atleast an msata but there’s still plenty that we can figure out haha. .

alright so lastly, I was looking around inside the console the other day and i noticed a black 4 prong port. I’ve looked everywhere online and haven’t found a clear answer does anyone know? I included a picture here so u can check it out. It looks like it could be either a fan plug, small sata power supply (kinda) maaaaybe usb or audio. I plugged a small speaker into it the other day and it melted so its not audio

and its definitely not 3.3v and I wont tell you how I came to that conclusion so all thats left are the 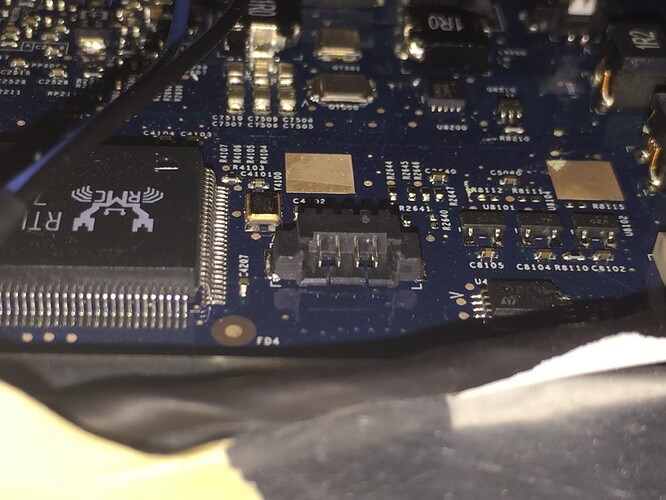 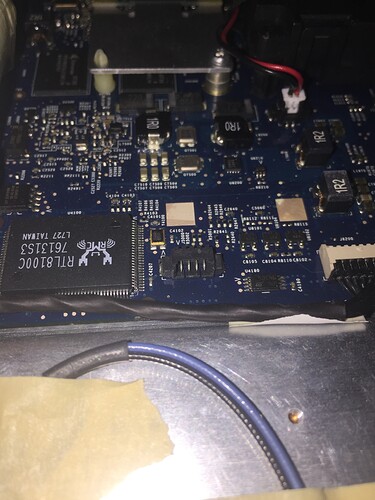 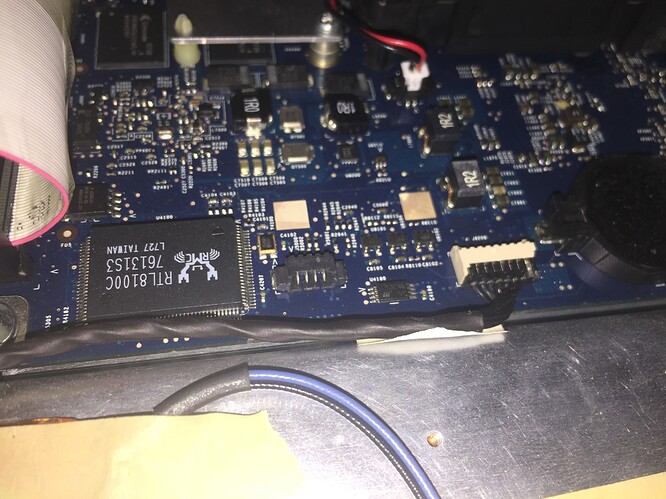 Edited because I realised it was wrong.

Hi friend, my small contribution to your post, I like you want to change, or update ie: memory, cpu etc, but those that know tell me that it’s impossible , they told me you could not install two drives into the ATV1, you can, there must be a way to install more Ram, but of course the software would have to changed to allow this to happen, but please there must be someone out there that know’s what we need to do, *ANY IDEAS PLEASE POST"

Below see my pics of my last project. 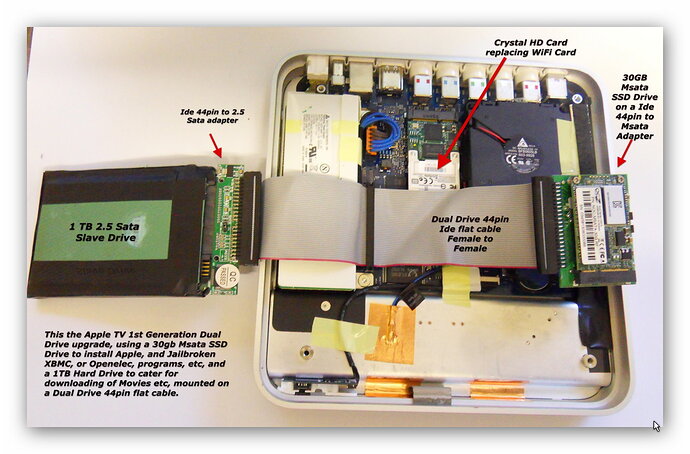 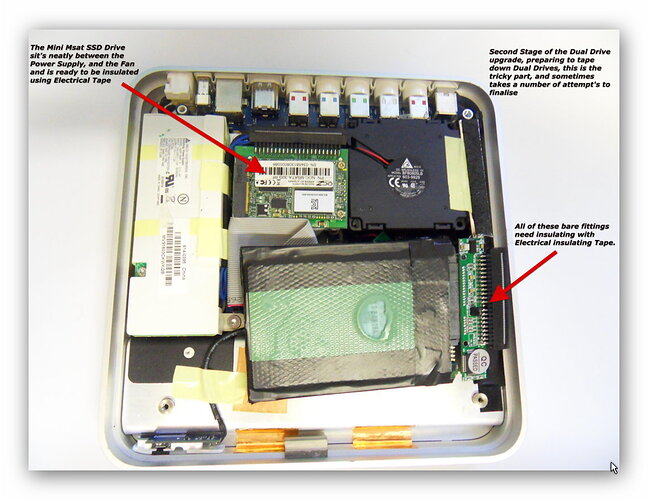 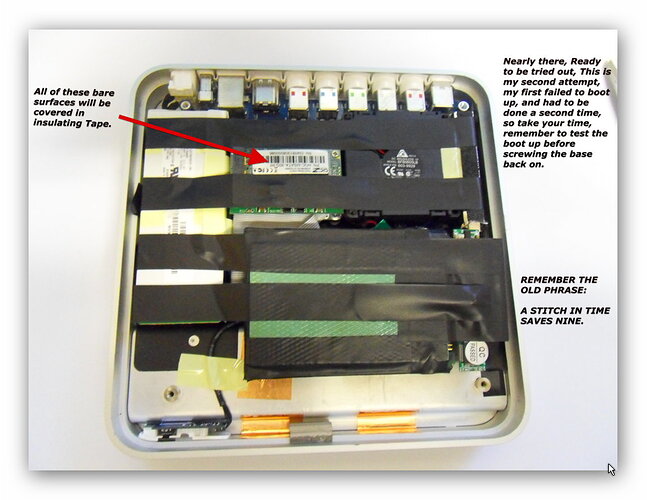 This image was my first attempt at this Dual Drive project, and it worked just like all the others. 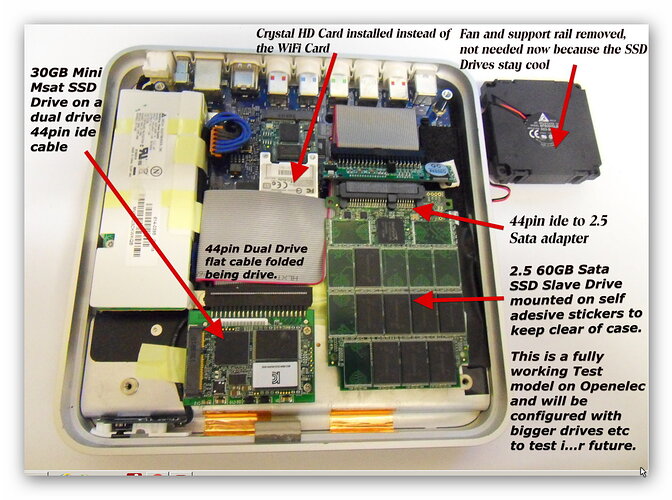 where did u copy these pictures from? is there a wright up u found on upgrades to the appletv?

Hi my friend,
these were pictures I took, this was my project, I have 4 ATV1s and each one has a different configuration, this is where I get my pleasure, taking things apart and rebuilding, not so worried about what happens after. If there’s something particular you’d like to know about upgrading your device, fire away my friend, always willing to help out.

man id love to see what u did to each appletv! also would love a parts list for the ssd build… could u do a step by step tutorial or even a video perhaps? even tho these are old, id love to see what exactly they are capable of especially since i do believe they can last for a very long time, only hard part is the coding of software towards these in the future as the have limitations…

Ok friend, firstly will set out what you need to do a simple Ide to SSD conversion, this will include pics of the required parts, adapters etc, I’ll try and do it one day next week, I will make a video in the very near future starting with an untouched ATV1 and progressing through to the final Configuration, the pictures you’ve already seen show the box in a Dual Drive configuration, but to be honest I only build this to prove that I could, it’s better with a slimmer config, ie: a small 30GB Msata SSD on a Ide 44pin adapter. then for backups and downloads use a USB SSD drive in the USB Slot.
This is about the fastest working ATV1 you can get. The only stuff that’s out of my pay scale is the coding etc, I have to leave this stuff up to Sam and the rest of their hard working team, I never ever learned that stuff, it goes straight over my head.

Thank you very much!

yes man! this is amazing

where did you get that 44 pin dual drive flat cable? I’ve looked for them EVERYWHERE but cant seem to find them. I ordered two and they were both the bigger 3.5 ide.?? I’d really like to invest in a decent size ssd to get rid of moving parts and bring down the unit temp. I run a little hidden fan over it and i’ve noticed it keeps the top (where the gpu touches the case) that it keeps a little cooler. Things are a little more responsive when not as hot.

Hi friend, the below link is one source, I myself got mine from China but have long lost the link,

Below is the chinese link for the 44pin ide to Msata ssd adapter.

http://www.amazon.co.uk/JaneDream-MSATA-Adapter-Interface-Converter/dp/B012VEN6OE/ref=pd_sim_sbs_147_2?ie=UTF8&dpID=519WsqJnWML&dpSrc=sims&preST=AC_UL160_SR160%2C160&refRID=1DV820W8Q8VGWQ3TBQC7 . Msata SSD Drives are widely available, starting at 8gb up to 1TB so the choice is great.

Is it guaranteed to work 100% without having to SSH and install stuff ?
Does it connect back to Wifi network after you unplug then plug it back again ?