When I watch a movie and press the i button on the remote control, an info overlay pops up.

I don’t know, if this is part of OSMC, Kodi, or the skin (I use the OSMC skin). Therefore please accept my apologies, if this is in the wrong category.

It is part of the skin and this would be the correct place as your talking about the OSMC skin. @Chillbo

Great, thanks for the reply.

Shouldn’t be a big thing actually. Will have a look at this.

For some reason this has not been part of the video player info dialog before although the label was supposed to be composed the same way as the video library title label. The fix will be part of the next update: 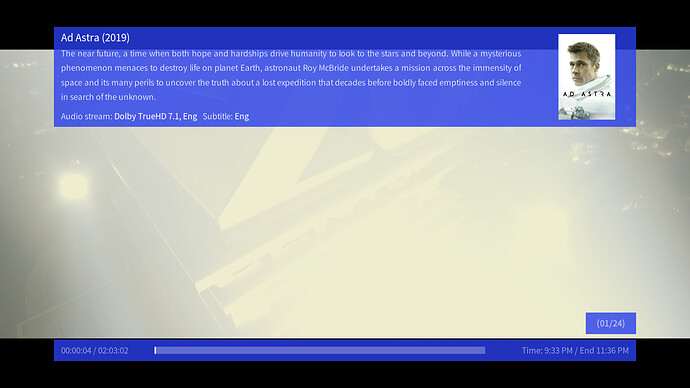 For TV shows it will look the same as the video library title label as well - the first premiered information is not available to the skin in the videoplayer: 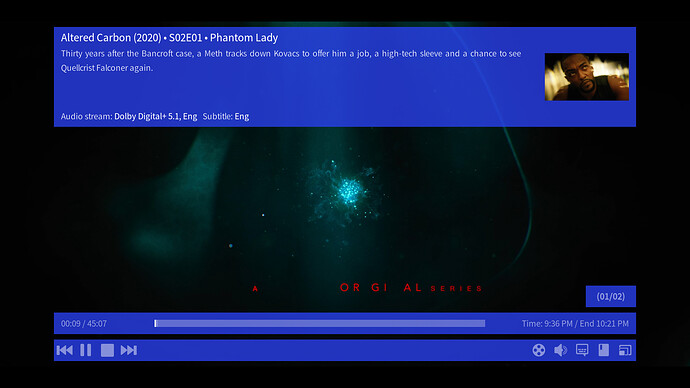 Thx for pointing me to this!

This is great. Thank you. One question though. I was always wondering, why the audio stream and subtitle info is shown, but not the video info (e.g. x264 or x265, …). It’s not that important, I’m just curious.

The thinking is: quick access to information about which audio and subtitle stream are currently playing. It’s not meant to show detailed information about the current playback in general - that’s what the ’ Player Process Info’ dialog is supposed to provide.

Ah, ok. I just had the feeling that the video stream was left out… Yes, the info dialog has more detailed info anyway.
As I said, I was just curious.

Btw, is there a way to update the skin alone (without having to wait for the osmc update)? This is also just out of curiosity, because I can’t recall seeing anything in the UI that would allow that.

As soon as I push the skin update to our staging repo, you may update from there.

But how? There’s no update skin button in the UI. I have only started to use my Vero4k a short while ago and I never used Kodi before, so all this is new to me.

It may be better to wait for a stable update, otherwise you would need to use the command line to update.

That’s ok. I’ve been using POSIX systems for decades. I just need to know how things are done in OSMC/Kodi.

I’ll post another topic a bit later. There are a few things that are not really explained anywhere - or I couldn’t find the info on this forum. e.g. migrating a Vero4k system to a new Vero4k HW, restoring backups, recreating thumbnails (when not backed up), …

Backup and restore is explained in the Wiki.

But how? There’s no update skin button in the UI

Skins are add-ons and like most other add-ons if you highlight one of them and bring up an information window you will find an option to update them. For most add-ons this is independent of OSMC as they are sourced from a 3rd party repository and Kodi itself updates them. Some add-ons, and the OSMC skin is included here, are packaged as part of the OS and get updated when it does.

On a separate note if you can’t find info on this forum about backing up and restoring I don’t think you are looking very hard. There is an option to do both in the My OSMC add-on and one of the Mods here has a program that can be installed that will do the entire OS and it has been mentioned in quite a few threads. Thumbnails recreate themselves as long as the files they were pointed to during the original scan are still in the same place.

On a separate note if you can’t find info on this forum about backing up and restoring I don’t think you are looking very hard.

I found threads on backing up, but not on how to restore a backup. There’s one option that is not checked by default (thumbnail folder very large). So I was wondering how they are re-created. When you say they are automatically recreated… when? I’d like to trigger that. Let’s say after restoring the backup that does not include the large thumbnail folder (which probably also includes the artwork).

Let’s say in a few years I want to buy a new Vero4k+ to replace my current Vero4k. I don’t want to start from scratch. Of course, I could just clone the entire filesystem, but I thought there were other options.

It is of course possible that I missed such a migration guide.

Backup and restore is explained in the Wiki.

I only found Backing up Settings

The backup program in My OSMC (afaik) just grabs whatever Kodi files are selected, dumps them into a compressed file, and then moves that wherever you had selected. If you select restore it asks you to pick the backup archive and then it just copies those files over the top of whatever is currently there (which is why you can be selective about what your backing up). You can select thumbnails but there is a few issues. The first is that it will slow the backup, and depending on how large your library is, this can be considerable. The other is that you have to have room in your home folder to temporarily store this much information until it is able to copy it to your external path. It is not really much of a benefit as well as this is only a cache and if Kodi tries to grab one of these images and doesn’t find it the original location is stored in the db and it just grabs the original from there and re-caches it on demand. If you wanted to force that to happen you could use the texture cache maintance utility for that task. This is of course assuming someone is just using the normal SQLite db as backing up a MySQL/Mariadb install is a bit more involved.

Or if someone was inclined they could just install SMB, from a PC manually copy the .kodi folder to wherever they want to back it up, and to restore just ssh and systemctl stop mediacenter, copy the folder back, and then restart Kodi. You can dupe an install the same way.

I only found Backing up Settings

This will back up all your Kodi userdata
I will reword that.