Adding child directories by browsing instead of typing out full path

I use SMBv3 and Windows 10 to share a partition with video files on the local network. The structure of the partition is as follows:

I added the top directory in Vero 4K with the following line:

That allows me to browse to child folders from that top folder on the Vero. However, on my previous Kodi device (first-generation Amazon FireTV), I was able to take this a step further by adding all the individual child directories as separate shortcuts in Videos > Files simply by browsing to them from the parent directory and pressing OK. This ability seems to have been removed in OSMC, and the only alternative is using an online keyboard to type out a lengthy path multiple times for numerous folders. Can the ability to browse & add be added back to OSMC?

@grahamh provided the following answer in a different thread:

You don’t need to add children as separate sources. Once the parent is a source, you can browse within it, pick any folder and scan it into the library. This is standard Kodi behaviour. The way Kodi uses ‘sources’, and ‘library’ takes a bit of getting used to but as soon as you abandon the notion of organising your media by file folder and use the library to its full potential you may understand the Kodi devs logic.

Different people use Kodi differently. I have been a XBMC/Kodi user for 14 years, and I never use Kodi-generated Movies or TV Shows menus, because I find Kodi’s organization logic to be lacking. Using Videos > Files is vastly superior for numerous reasons, the more important of which is much tighter controls over content. You can choose whether something is a movie, a TV show, an anime or–very importantly–“none of the above” in as many folders and subfolders as you like, and you don’t have to deal with the duplicate or error entries that the library will inevitably create for you.

Another huge advantage of using Videos > Files is the ability to quickly delete a video file after watching it without dealing with the effect it’s going to have on the library.

This ability seems to have been removed in OSMC

OSMC does not remove features of Kodi. If things have changed it’s because Kodi has changed.

I’ve already suggested to you, and I will again that you should think about using the library feature. Also, instead of using the built in SMB you should consider using fstab mounts.

[EDIT: I posted this while you were posting]

If you have this working on Kodi, can you let us know the skin, version and platform? As @bmillham says, we haven’t removed anything. You may be using a version of Kodi with a patch which adds this behaviour however.

What you are talking about now is Kodi. OSMC just includes the latest version of Kodi. If features of Kodi have changed that you don’t like, then you need to work with the Kodi team.

OSMC does not remove features of Kodi. If things have changed it’s because Kodi has changed.

I can install the latest Kodi build on my laptop to test that. But I’m pretty sure it was still in Kodi the last time I tried it.

Also, instead of using the built in SMB you should consider using fstab mounts.

I am not familiar with fstab, but the first Google result is from an Ubuntu site. If that requires converting my shared drives from NTFS to something else, then that’s probably out of the question.

I’ve already suggested to you, and I will again that you should think about using the library feature.

Thanks for the suggestion. I don’t plan using the library for the reasons described above. The library is lacking and is not that much smarter than the iTunes, Google Music or other libraries, which have screwed up my media collections many times over the past 20 years. Maybe some day software will get smart enough to manage our content for us, but at least for now, many people prefer to have control over the files with additional layers over them, as opposed to control the layers and hope that they manipulate the files correctly. You can call it a philosophical difference if you like.

If you have this working on Kodi, can you let us know the skin, version and platform? As @bmillham says, we haven’t removed anything. You may be using a version of Kodi with a patch which adds this behaviour however.

It’s vanilla Kodi for Android, but the build is probably about 7 months old. I will install the latest Windows version and get back to you.

I am not familiar with fstab, but the first Google result is from an Ubuntu site. If that requires converting my shared drives from NTFS to something else,

That’s a bad Google result! You can mount NTFS shares via fstab.

I’ve been using XBMC/Kodi for about as long as you, and the library has mostly worked for me. You are right that it could be better. And as someone who does some development their database structure is really out there! But I’ve learned over the years how to live with it.

Videos > Files simply by browsing to them from the parent directory and pressing OK.

Besides the change to use fstab to mount the folder (as already suggested by others) and then be able to add individual sources you also could on the respective Folder choose the context menu and add them to Favourites. Ones in Favourites you easily can add them to home menu you want via Settings - Skin - Configure Skin - Customize Home Menu

@sam_nazarko The latest Kodi version doesn’t seem to have the browse ability anymore either. It may have been removed with Estuary’s release.

@fzinken I tried adding a few video directories (from Files) to Favorites by browsing to them, and that seems to have worked. fstab may not be needed for this purpose (unless I’m missing something).

@bmillham It’s not really a question of whether Kodi developers have done a good job with the database or not. I’m sure they have. But their definition of what constitutes a “movie” is limited to specific use cases. More importantly, developers should not be dictating users how to organize or archive information. Especially if those developers don’t have advanced degrees in library science, I’ll take my own ability to organize information over theirs. Not because mine is better, but because it’s mine. Take the following example:

This is how Windows sees this entry: 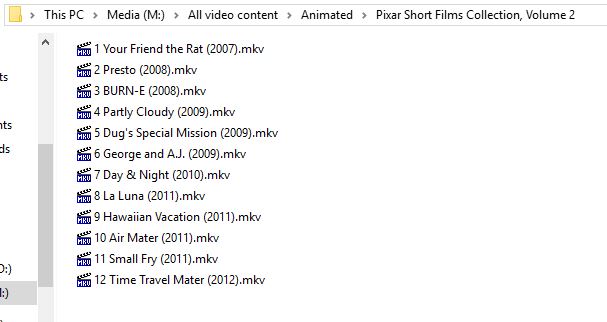 This is how Kodi Library sees it: 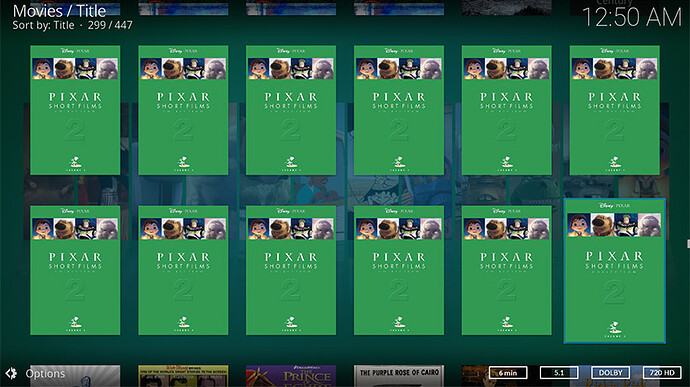 This is how Kodi Files sees it: 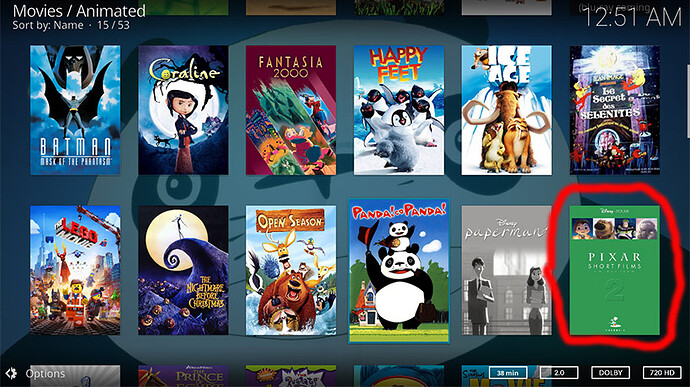 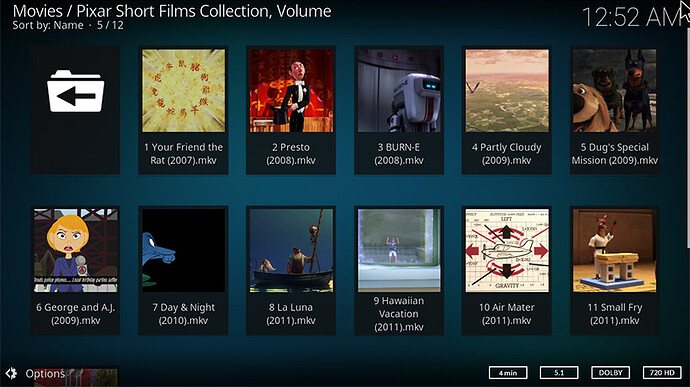 You may have your own preferences for organizing media, but in my view the winner is indisputably clear. The Files view is the closest reflection of how the information was originally archived, with all the benefits of the additional metadata that can still be sourced from oracles etc. It allows you to keep individual entries separated by directory and doesn’t get confused when you throw additional media, such as trailers or disc extras in it. Again, I don’t claim this is the superior way of doing things (in fact, I have given up on sorting my digital photos by directory), but this is my way, and it works very, very well for movies.

@Knocks: This misbehavior in the Movie menu I can reproduce if I misconfigure the content of the video source I added in the Videos → Files menu.
You clearly organize films NOT in separate folders (like the most) but seem to have activated the flag “Movies are in separate folders that match the movie titles”, see 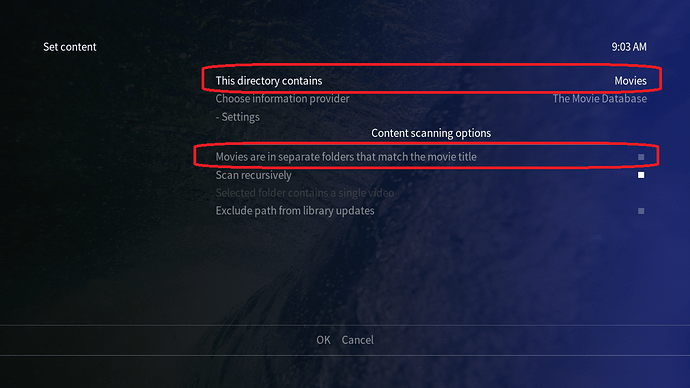 To correct this I suggest:

As far as I can see this should fix this situation.

The flag means to get the video name from the folder name which is “Pixar Short Films …” and the green cover is the best match the video scraper has found for this title on the meta server. So every file in the folder is interpreted as to be this film … weird but it’s the effect of using this flag.

@JimKnopf Unfortunately that toggle option does not fix the limitations of Kodi’s library. As discussed above, it should be up to the user to decide whether a compilation that was released to retail as a single title (despite containing several short films) should be considered a “movie” or not. If you toggle the folder option as you suggested, individual 5-minute cartoons will be spread throughout the library instead of being in one place.

Additionally, that toggle option does nothing to stop the Library from showing directories cointaining multiple video files relating to the same title (for example, Spiderman.mkv, Trailer.mkv, and DVD_extras.mkv) as separate titles.

To me, the Videos > Files menu is far superior to Library for the reasons already discussed above. Long story short is that Videos > Files allows users to retain direct control over their files and how they organize their media, and some users will always prefer that.

I do not want to convince you to anything. Everyone should use kodi to his taste.
You took your time to make screenshots about a behavior you don’t like and I showed the reason for it and how to get rid off. That’s all.

Have fun with OSMC,