It used to be that you could type, say 13000 to jump to the 1 hour 30 minute mark of a recording. This is no lnger possible after the update. Any ideas why?

(The update also forgot where partly watched recordings were stopped last. Ie no “Do you want to resume at 30 minutes?”)

It used to be that you could type, say 13000 to jump to the 1 hour 30 minute mark of a recording. This is no lnger possible after the update.

Still works for me. Mostly - I wonder if there are some button bounces that mess things up.

Including “Do you want to resume from?”

I can’t find any half-watched videos that I can sure I stopped before upgraded. But something I watched a couple of days ago resumes OK.

Do you want to resume work fine for me.

Resume works for me too.

Interesting… It used to be that you could select “player” and that made a difference, but I cannon find that setting now.

OK. Good to know it is just me

I see you’ve had some issues finding some recordings. If I try to resume a recording and it times out waiting for my disk to spin up the resume position is lost. Annoying.

Nope. that does not seem to be it. I solved that (see other thread) but neither typing a time or resuming seems to work. I also did a test recording, watched half of it and exited and it did not show the indicator, ie a half filled circle thst it used to in the past.

I also tried to change the keyboard layout to UK, but that made no difference.

OK. Typing 1000 will jump into the programme at the 10 minute mark. I (incorrectly) assumed it would no work as what I type no longer is visible on-screen. Before the update, the typed digits were shown on screen. Would be nice to have, but I can live with this.

That leaves resume on the fixlist. Where is the info stored? Library?

Edit: Ran a clean on the library and that brought back a resume for one item at least. Will investigate further tomorrow,

Before the update, the typed digits were shown on screen.

I can’t remember that. Maybe @chillbo could look into it.

Where is the info stored?

It must be in tvheadend. I get the same restore point on different clients.

Yes, it’s stored as playposition (in seconds) in files in ~/.hts/tvheadend/dvr/log/

I can’t remember that. Maybe @chillbo could look into it.

Frankly, no idea… Have never used this feature. Should this work with every video file?

And: Is this even skin-related or a Kodi functionality?

Just checked - Estuary on Windoze does show the digits. And Estuary on OSMC.

I doubt OSMC skin ever did.

I tried changing to Estuary, but then I could not find the PVR menu so I switched back. Changing skins os not an option. It would have a serious user-acceptance problem. I also find the OSMC skin more aestethically pleasing and easier to navigate. Good work @Chillbo

Yes, the display as you typed was there in the OSMC skin before I upgraded. I am 100% positive.

Changing skins os not an option

I’m not suggesting that, just a note that it should be possible in our skin.

I just checked - we did have that displayed on the old skin.

I’ll have a look, but I’m not sure what I could’ve removed for that to not show anymore…

yes. It’s on the right above the progress bar.

We’ll sort this out, @AndersG

Thread is bookmarked. It’s on the list of bugs that need looking into.

Found the issue, @AndersG… It’s been quite long ago that I’ve lost the code for this feature during the v18 skin work. Sry for this!

It should work again in the next update: 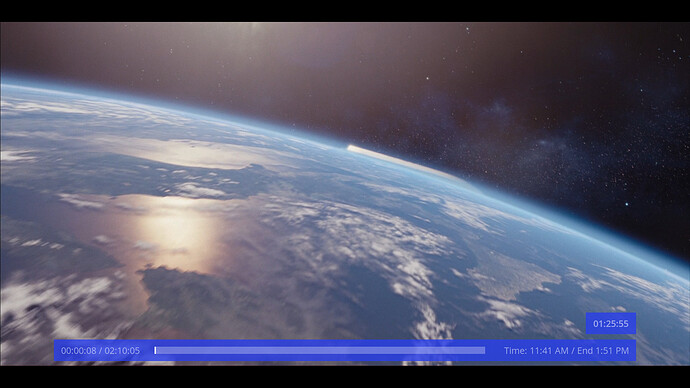