is pretty decent, BUT i don’t get the effect i see on youtube videos.
what i mean is: yes, the leds are working, but are not glowing that much as i thought they would.
the config is default.
this type of leds: http://static3.watterott.com/12mmledpixelclose_MED.jpg

questions (for the more experienced forumers):

thank you for your time.

How did you mount your leds? Pointing up or against the wall? You should mount them on a frame pounting against the wall. You will not see a good effect if they are pointed outwards and your tv is some cm away from the wall.

Also, yes, you should make a custom config based on your leds per side.
I used 24 across on top, 9 on every side and the rest at the bottom.
Get the hyperion smartphone app and play with the settings. If you think you found a good config, write the values you found with the remote app to your config.

well, the leds are currently taped on the back of tv with some adhesive tape.
and they are poiting up, because the tv is not mounted on a wall, but is on a table. smth like 20 cm from the wall.

Get the hyperion smartphone app and play with the settings. If you think you found a good config, write the values you found with the remote app to your config.

can you please be more specific on this part?
regards

As said, the only effect you will see is the shine of the leds on the wall behind the tv. So tape them that they are pointing against the wall. 20cm should be a good distance. This will help tremendously if you cannot get your tv nearer to the wall.

I guess you use hyperion as the software. So go to the appstore and search for the hyperion remote app.

Edit: Read here for everything you have to know: 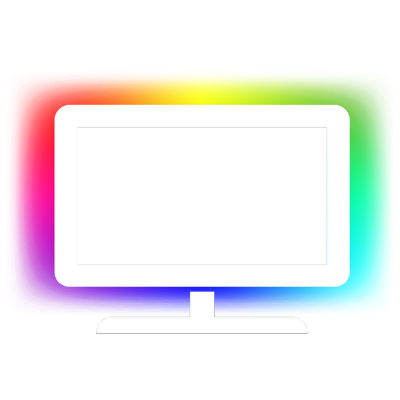 Edit 2: the leds themselves should not be visible on the sides on the tv. Can you make a photo of your setup?

sorry for the mess 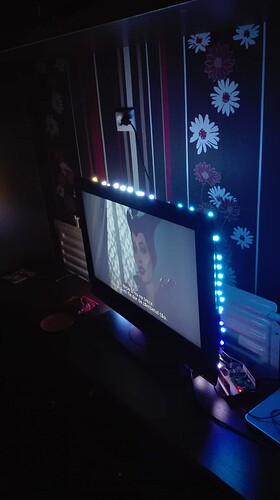 Yeah. Just point the leds at the wall.
I think you did not understand how the effect works:

You are not supposed to see the leds themselves, but only the light they shine on the wall behind the tv.

As you have a dark wall, you maybe won’t get the effect you are after at all

Edit: a white wall would be optimal. Light yellow or red can be calibrated out, but black will swallow moat of the light anyway.
You could probably get a big white papersheet to put behind your tv to test the effect.

the leds are visible if i stand over the tv. if i am laid on the couch - i see only the shine, but i miss the brightness of the shine.

As said, the leds themselves don’t shine into the air. They need to shine onto something and that is the wall. With a black wall you won’t get much brightness.

Point them at the wall. 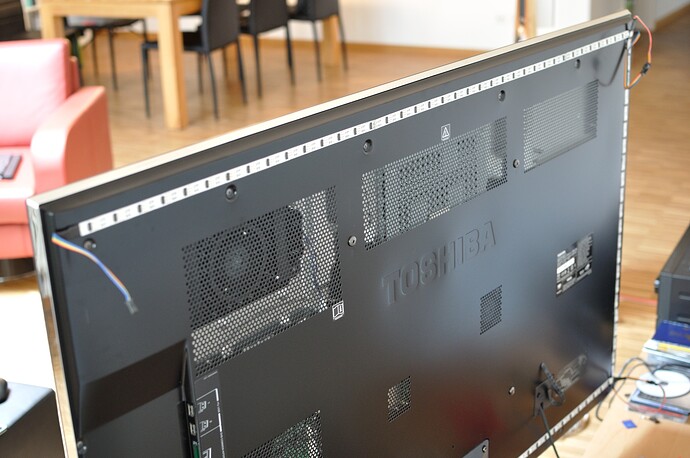