I just finished my ambilight project. It’s really fun and looks amazing. Everything works like a charm except 2 sides of LED strip as you can see from picture below. I am using 109 LEDs (WS2801 strip).

I am running OSMC with well configured hyperion.json file.
Did anyone have a similar issue?
Please someone help because I’m stuck at this moment and it starts driving me crazy. I am not sure if problem is with hardware or software. 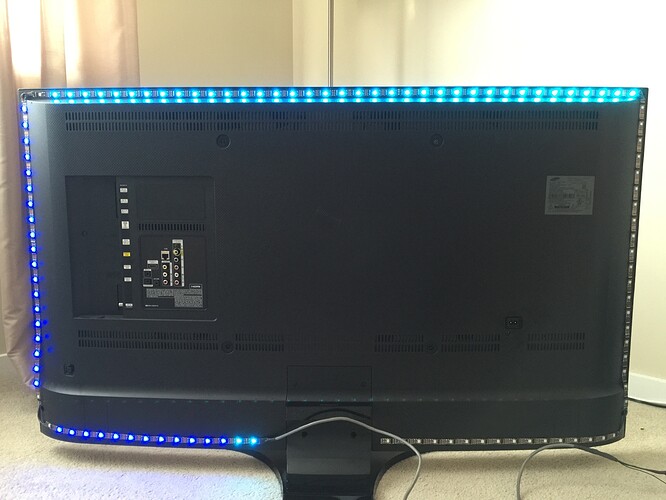 Did you solder the connections between the sides?
If so, check if you got the directions right so +/- and data/clock lines are not switched around.

Edit: On the photo it looks like the chip on the right ribbon is not the same orientation than the ones on the top strip.

Hi bozha,
as far as I know those two strips at the bottom don’t have to be connected with each other.
I also did my own ambilight but using ws2812b stripe and arduino. Earlier I was using only RPi to control leds but the effect wasn’t so smooth.

From the picture it seems’ they have been placed in a good order.
@mcobit the order is correct. The flow should go starting from down left strip, through left one, the top, the right one and finally end in bottom right

I would suggest few things.

The flow might be right, but the strip could be mounted upside down resulting in reversed polarity of the contacts.

How much power does the supply for the LEDs provide? With 60mA per led you should have about 6.5A available for the 109 LEDs.

Cannot help, but could you please tell me which tutorial you used? Had tried this but hadnt much luck with that cauae there is only one led working …