Any instructions on building rbp2-mediacenter-osmc from github source?

I tried looking around the site and Googling but was unable to find any info.

I plan on the build host being a Ubuntu system.

if i understand you right, you want to install osmc to ubuntu on RPi2? if yes, check this link

No I want to compile the individual rbp2-mediacenter-osmc.deb package with some extra commits from the newclock4 Kodi branch merged in.

I mainly need to know the flags and configure options used to keep it as close to the stock OSMC build as possible. I think I found and installed the right toolchain already on the Ubuntu system but it those where part of the instructions, all the better since I’m not 100% sure they are right for the Rpi2 since the instructions only mentioned the Rpi1

I mainly need to know the flags and configure options used to keep it as close to the stock OSMC build as possible. I think I found and installed the right toolchain already on the Ubuntu system but it those where part of the instructions, all the better since I’m not 100% sure they are right for the Rpi2 since the instructions only mentioned the Rpi1

You are overcomplicating things.

Thanks, I have tried that and it works. It was slow but I assume if I use “make rbp2 -j8” it will use more then one core? Or should I set the number of cores in some build script?

Due to a stupid typo in a patch that caused problems but not a build failure I have to start a new build that will hopefully work and would like it to be faster.

it will use more then one core? Or should I set the number of cores in some build script?

We will release some more ‘thorough’ documentation for building soon.

Specifying core count (-j) does not matter, as this is calculated automatically.

You don’t need to kick off a build each time. You will see a directory called /opt/osmc-tc/armv7-toolchain-osmc. If you run

You will be able to rebuild the Kodi package without needing to do a full build each time. Note that this won’t give you nice Deb packages, but it will give you kodi.bin.

P.S. ccache is used for future builds so time saving there.
PPS. we will offer newclock 4 nightlies soon

Well at least I tried to get DTS-HD working but I should give up since I can’t even code a hello world to save my life.

I got it to compile but when I turn on the “Support 8 channel DTS HD audio” in video acceleration it breaks any dts* audio.

I’m just going to be stuck waiting on the nightlies, but feel good that I at least tried.

Hi is the criteria for building OSMC from source a Debian Based Distribution?

You need Ubuntu or Debian to build on your PC, but all OSMC packages for your device can be built on the OSMC device itself. E.g. you can run ‘make rbp2’ on the mediacenter package after cloning the Git repo on an OSMC system.

I was hoping it can be done from Centos…looks like I have to install Ubuntu on a VM.

In theory it could, but the toolchain is retrieved via APT. I would happily accept a patch that allows this to not be the case.

install Ubuntu on a VM.

You could always use a Debian or Ubuntu chroot…

Sir please have you released any documentation on this. Something i don’t understand is after making some changes in a package, for instance including additional addons, then build the package before building the image, the image still don’t contain the additional addons.

hey sir, maybe i am not getting it . i have gone through the wiki as you said but still couldn’t get a link to building a custom package . please could you point me to a link, cos there is no helping link in the wiki as shown in the image attached 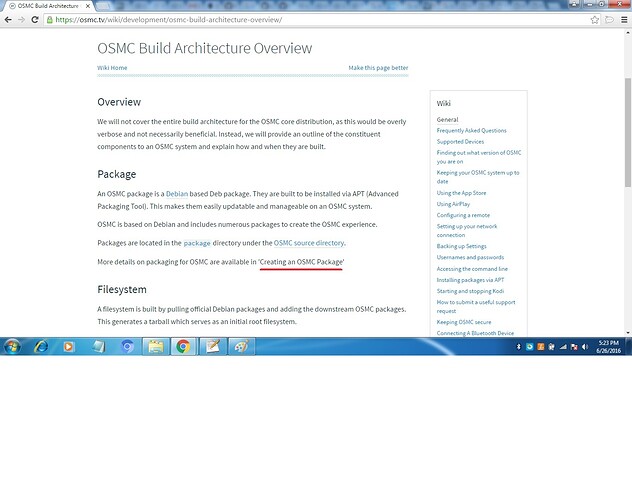 Building packages is explained in this very thread a couple of posts above. You would have to explain a little more about what you are trying to actually achieve.

I have not created the Building a Package section in the Wiki yet, but it is quite simple (as shown above).

I have custom addons i want to add to kodi, so i need to know how to include the addons and build our img to have those addons.

You don’t need to build a package for that. You should look at the information on building filesystems and images instead. The build system is modular, so you would be interested in Filesystem and Installer (Target) stages.

If you are customising OSMC, you need to follow these Trademark guidelines Corporate and Legal - OSMC regardless of whether you are planning on selling the software. If you make changes to the OSMC images (.img) you cannot use the OSMC Trademark, so you’ll need to edit all strings, splash screens and references to OSMC.

If you are slipstreaming add-ons, you should do so in a way that allows them to be updatable. Otherwise we may update the Kodi version and break your add-ons. You will need your own update server (either a Kodi repo, or an APT repo) for this.

Please sir, where do i find the information about building the filesystem, there is no info about it in the wiki.

As stated, the development Wiki is still in progress. I have not finished writing it fully. If you are unable to work out how to build these things, you should probably not be distributing or modfiying OSMC images.

Closing as the scope of this thread has changed significantly.