Any update on getting generic usb remote sensors working?

I have a total of 5 pi’s and I’ve only been able to upgrade 2 of them to OSMC because I didn’t want to have to buy a flirc receiver for all of them. There was a known issue with mce receivers in the early days of OSMC. Are these receivers once again supported as they were with raspbmc? Thank you very much in advance.

Without someone willing to do some testing, who knows ?

“Generic USB remote sensor” could be almost anything…

If you have one that you can plug in and provide full debug logs that would be helpful, as well as the model/name.

I have 2 pi’s both using ‘generic usb MCE IR receivers’ with my logitech Harmony 600 remote. OSMC has worked just fine with them since I upgraded to it which was in the July release. The only thing that changed for me was some of the button mapping was different. Not so much so that I tried changing the mapping but rather I just figured out on the remote what buttons did what and am happy enough.

The only real problem I have is that the one time (didn’t put much time into it) I tried on my 2nd Pi to use the My OSMC settings to change to the RC6 remote it totally failed to work. I’m a little stumped by that one, but again haven’t spent much time with it.

The problem is the confusion of the end user in selecting the right remote. There are RC6 MCE remotes which are clones of the Microsoft remote and then there are Generic MCE remotes which includes the Ortek, Hama, VRC1100 and others which appear to the system as a keyboard and mouse. If there is NOT a sticker on the back of the remote which states it’s RC6 then it most likely NOT a Rc6 MCE remote. If your remote includes mouse function then it is NOT a RC6 MCE remote.
@muchgooder exactly what remote are you trying to get working? As far as I know most remote problems have been resolved, if you haven’t tried recently give it a try and report what happens.

Thank you all so much for the responses. Sorry, I should have included a little more information. I did upgrade a 3rd pi to the current release and tried it with my current remote (Harmony) that was mapped to work with raspbmc. The IR receiver is an HP OVU400102/71. I did a little research on this receiver and there is nothing that says that is MCE so it is most likely not. I never did own the remote for it (purchased them on *bay).

Are these dinosaurs no longer supported? If so that would be completely understandable.

This appears to be a RC6 remote so it should work. Plug it in to the PI then go to MyOSMC>remotes and select RC6 MCE remote then reboot and see if it works. The Harmony should be set to HP remote if available, if not try Microsoft MCE remote (I do not know much about Harmony remotes, I have one that I hate )

Thinking about it and even though the usb will work you may want to consider equipping all your PI with $2 TSOP IR receivers that connect to the gpio. They work great and consume very little resources. In my opinion they are the preferred way to use an IR remote with a Pi

Typically a USB receiver (especially if the remote emulates a keyboard with “mediacenter” buttons) will not go through lircd - therefore the setting in the My OSMC remotes section will do absolutely nothing, as it only configures lircd profiles.

USB receivers would typically be recognised directly by the kernel and then depending on udev rules will be sent to eventlircd to handle and then forwarded on to kodi. If the remote doesn’t work at all this most likely means there is no udev rule matching the USB ID of the receiver, thus eventlircd doesn’t get called into play.

To find out we would need a full set of debug logs when the receiver is plugged in.

I tend to agree that a GPIO IR receiver is the preferred way of using a remote with a Pi / Pi 2 - not only are they cheap they are very flexible in that they will work with practically any remote, and even if there isn’t already a profile for the remote you can learn it with irrecord. (You also save a USB port)

Most likely the remote in question would work via a GPIO IR receiver by selecting the RC6 profile.

Even if the USB receiver does work it is more difficult to fix any button mapping issues as you would have to do it within Lircmap.xml or write a custom evmap and udev rule for eventlircd, which is not for the feint of heart.

Okay DBMandrake, so let me dumb it down for myself here a little.

4, Would the resource consumption difference be noticeable from a user perspective if it’s only being used to consume audio and/or video media (no other services or programs running)?

This appears to be a RC6 remote so it should work. Plug it in to the PI then go to MyOSMC>remotes and select RC6 MCE remote then reboot and see if it works. The Harmony should be set to HP remote if available, if not try Microsoft MCE remote (I do not know much about Harmony remotes, I have one that I hate )

Thanks much - I did try every single remote with no luck. I am more than happy to purchase a cheapo TSOP remote instead of bogging down the devs with these logs (unless someone really wants them, of course). I have enclosures around all of my remotes - are there any TSOP receivers that would work for me in that setup? 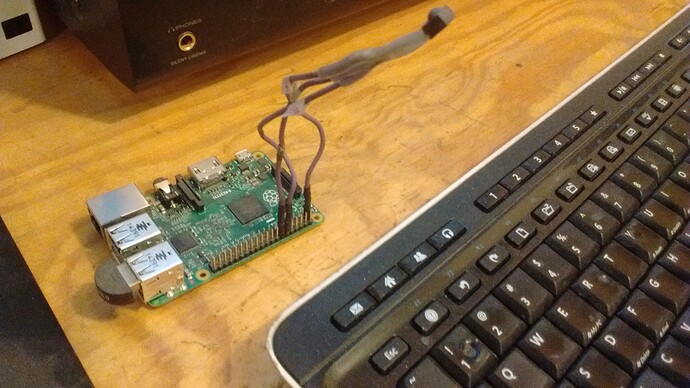 Here’s a pic of a TSOP receiver installed on a Pi, the wires can be whatever length you want and can fit through a small space/hole in your case

And here is my TSOP receiver inside the bottom right corner of a transparent case. (Transparent top cover removed for the photo) 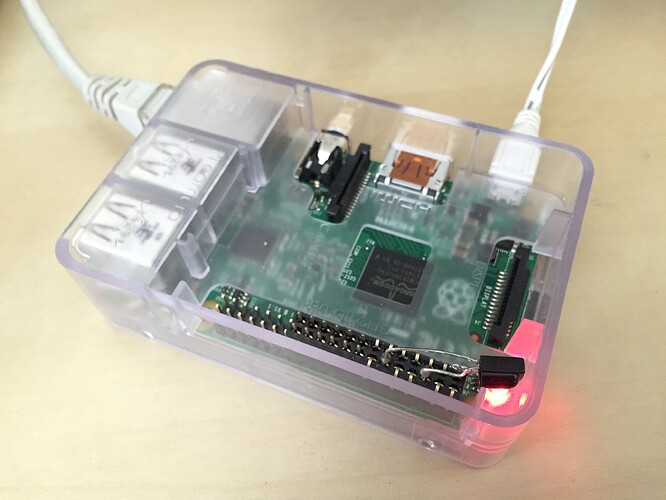 Correct - the remotes section in My OSMC and it’s profiles configure lircd which is a daemon that decodes raw infra-red signals (pulses) from your remote and converts them into key codes such as KEY_UP, KEY_DOWN etc for Kodi.

So a lircd.conf file (which is what you’re choosing among in the remotes section) is a file that describes the pulse timings of the different buttons on a given remote and maps that to key codes. You can see these files in /etc/lirc, or read them on the left side bar in the remotes section if you’re curious.

A USB receiver on the other hand does not provide raw data - it already decodes the IR signal for you into key codes, so no decoding is necessary. Depending on the specific receiver it might make the remote look like a keyboard/mouse, (arrow keys, enter and so on) or it might send so called mediacenter keys - those extra buttons like play/pause and so on that were a fad on big curvy keyboards a number of years ago but are now typically only found on laptop keyboards…

In theory a USB receiver should “just work”, although button mappings may not be ideal and need some tweaking.

Yes, but again you shouldn’t need to do anything to get the remote working - and if you decided you wanted to remap some buttons that can be done in a Kodi config file.

A flirc is different to most other USB IR receivers - I have one myself and use it on a Mac Mini.

Basically it looks like a regular keyboard to the computer that you plug it into, and you “teach” it the buttons on your remote (any remote) and tell it what key to “press” when you press a certain button. This is done using the software provided with the Flirc on a Mac or PC, and this training is stored in the device itself, so you would train it on a computer then plug it into the Pi.

So your remote does not look like a “remote” to Kodi when you use a Flirc, it looks like a keyboard, so you would train it that the direction buttons on your remote would send cursor keys for example, and OK would send the Enter key.

4, Would the resource consumption difference be noticeable from a user perspective if it’s only being used to consume audio and/or video media (no other services or programs running)?

Not entirely sure what you mean here - if you mean do different remote input methods cause different amounts of CPU load then I would say that you would not notice any significant difference.

Correct - the remotes section in My OSMC and it’s profiles configure lircd which is a daemon that decodes raw infra-red signals (pulses) from your remote and converts them into key codes such as KEY_UP, KEY_DOWN etc for Kodi.

I’m not sure i agree, or perhaps i’m not following. I have a RHRC-11002 which is listed as an RC6 (sticker on back) MCE remote with a USB dongle receiver. It did “just work” after installing OSMC. However, after choosing the rc6-mce-lircd.conf file, i started getting the multiple presses. I eventually got it to stop (check this out to see what i did Multiple remote presses in 2015.07-1 - #6 by Gmoney ). However, i did enable the keymap editor and played around with it. It created ~/.kodi/userdata/keymaps/gen.xml . In that file it looked like it was remapping keys on a keyboard… not like any of the stuff i’ve seen for lirc config files.

Yes, but again you shouldn’t need to do anything to get the remote working - and if you decided you wanted to remap some buttons that can be done in a Kodi config file.

What is the Kodi config file you are referring to?