When plugged into my OSMC raspberry pi, dmesg gives me:

The chipset for this is 8812au, but even modprobing that driver doesn’t give me a network interface for the adaptor.

I have run all the updates for osmc.

When I go into myOSMC / Networking, the adaptor doesn’t appear as a wireless option.

I note that https://wikidevi.com/wiki/TP-LINK_Archer_T4UH states that “USB ID not yet observed in any mainline kernel / this list” - so tried adding to /var/lib/usbutils/usb.ids but the only thing that does is give it a name when I list the usb devices:

Still no wifi interface coming up though.

As the 8812au driver is in the kernel, what else do I need to do to get this adaptor to work ?

PS: Originally posted that as a reply to an older thread (Enable wifi under GUI - #58) but then deleted it to post as a new thread. Apologies for the duplicate if this causes any problems.

If you can confirm these steps work, I can add support in a future update:

Thanks for the rapid reply.

When I do this, it clobbers my ethernet connection and I have to reboot.

Yes, that is the path I meant.

What do you mean by clobber? Try and run the command with a keyboard attached and see if WiFi becomes configurable under My OSMC -> Network.

So I unplugged the ethernet, plugged in the Adaptor, rebooted and then exited Kobi to get to the console.

I run modprobe and then after

the raspberry pi just hangs. When doing it from the console with a USB keyboard I see a few screens of error messages before the Pi hangs. Over ssh it just hangs completely.

Should I plug the USB Adaptor in afterwards ?
Pete

You need to keep the USB adapter in and have it in before you run the above comands.

It would be useful if you could take a photo of the error.

OK here is the photo of the panic. 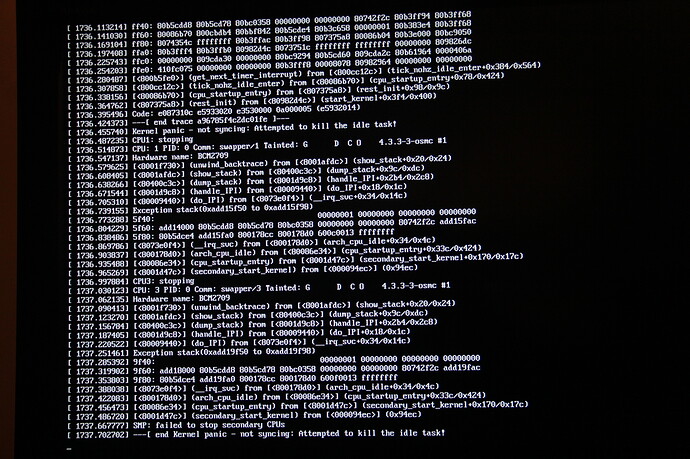 Did you need anything else from me to see what is going on with this adaptor ?

BTW - following this: GitHub - abperiasamy/rtl8812AU_8821AU_linux: rtl8812AU_8821AU linux kernel driver for AC1200 (801.11ac) Wireless Dual-Band USB Adapter works perfectly to get the adaptor running under Ubuntu - but that was just a test run before installing it onto the Pi!

That is the driver I originally based off, so it should work. I’ll add some more dongle IDs soon, but without one at hand my ability to resolve this is limited

Is there anything I can do to get better information on the trigger for the kernel panic which may help you ?

I think the crash is caused by forcing the module to try and match. If you’re having success with aforementioned driver, then I will look for commits adding new dongle support and I will add them to our tree.

Yeah - works great under Ubuntu 15.10 - so it looks like it’s the correct chip set etc.

Let me know if I can help in any way.

Any news on this Sam, and if not, what kind of timescale are we talking about?

I have not had time to look at this yet

Add support for TP-Link Archer T4UH AC1200 thanks to @JudgeZarbi

Still no support for this adaptor apparently?