Hello,
I have a Problem.
I start Raspberry and Firt load OSMC Logo and in 2sek. the Bad Smiley.
How icanfix the Problem.

Can you access the Pi still with ssh? If yes provide logs with grab-logs -A

It’s a bit strange that you don’t have a kodi.old.log

same problem for me too after updating this afternoon.

i’ve tried the above reinstalling kodi with no luck 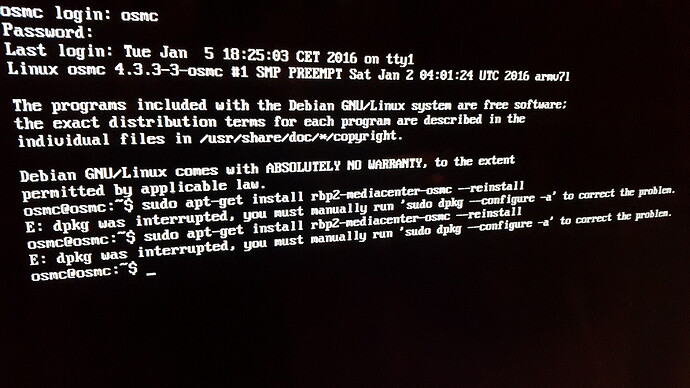 Who is the .kodi Folder ?

Who is the .kodi Folder ?

I don’t understand your question.
But did you run sudo dpkg --configure -a as instructed on the screen?

I Have Now Paste first “sudo dpkg --configure -a” and in the last “sudo apt-get install rbp2-mediacenter-osmc --reinstall” and Now in 5min the Prozess on 100% After I did it and have restarted the Raspberry is now everything works Perfekt. Thank you for your help Thanks.

Where can I find the .kodi folder? On the SD card I do not find the

it’s on the ext4 partition at /home/osmc
You can access it through SSH.

Where can I find the .kodi folder? On the SD card I do not find the

It’s on the SD card (assuming that you used SD card install not USB install). But it is a hidden folder (which is indicated by the dot).
Check this Wiki entry https://osmc.tv/wiki/general/configuration-file-locations