I’ve read lot several post about this topic and tried several workarounds.
I’ve used always the wifi built in adapter of the RP3 and i didnt’ had issue to play HD content or buffering issues previously, however since Krypton update i started to notice those buffering issues and right now it’s impossible watch any HD or even normal without buffering.

recently after read a post that it’s better use the smb module instead of the addon i’ve mounted by fstab the shares and i noticed a small improvement, see the logs attached https://paste.osmc.tv/bususufazi

Any idea or suggestion what i could try ?

Any idea or suggestion what i could try ?

Your advancedsettings is quite cluttered suggest to clean that up only to have the necessary settings to avoid also some wrong tags in there. Maybe also try to increase readfactor.

On the otherhand also check your wifi throughput with iperf3, could be that something has changed in the environment.

My PI3 has worked perfectly until the recent updates, it now stutters on playing content via NFS or Video add ons like Iplayer.
Other devices play the content fine, network performance has also tested fine.

My PI3 has worked perfectly until the recent updates, it now stutters on playing content via NFS or Video add ons like Iplayer.

Thanks. I have been digging a little deeper into the problem since I don’t experience the issue on other devices.
I use the internal wifi adapter of the PI3.
What I noticed was that the adapter was experiencing variable signal strength and as a result the negotiated interface speed was fluctuating.
There is a nearby ATV device so I moved the PI 10cm away from it. The signal strength and speed stabilised, playback immediately improved.
See attached pic of before and after (last few samples on the right).
It would seem the PI is sensitive to interference from nearby devices. 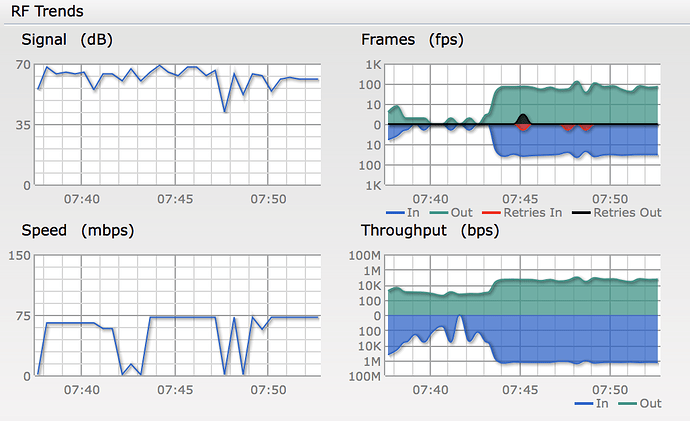 See attached pic of before and after (last few samples on the right).

It would seem the PI is sensitive to interference from nearby devices.

Thanks for the findings and yes the Pi3 wifi is know to be a bit trouble therefore many people use external dongle.

Is there an external adapter that is recommended? Particularly one capable of higher speeds (AC).

Is there an external adapter that is recommended? Particularly one capable of higher speeds (AC).

Honestly i haven’t tried use an external spare dongle i’ve around, however… i’ve two clone rasperry one it’s almost 1m from the router so signal it’s quite good, but still i’ve buffering in some HD content where the bitrate it’s higher, where in the past (previous releases of OSMC 16 etc… ) i haven’t face any issue.

i didn’t used NFS, i’ve used SMB as you problably saw already on the logs.
i will give a try also to iperf3 and see the output of both devices, thanks for the hints!

In your advancedsettings.xml the readfactor is really small. You have 1.0 while the default is 4.0. This requires fast network access when the buffer is running on fumes and i heard WiFi somewhere in the sentence

You could bump your readfactor up to at least 4 or 8 or just delete the whole file if it’s not yours… memorysize is also on the low side if you have a RPi3 and not running a lot of extra software.

May I ask why you have the fanart restricted to 720p while your screen is 1080p?