Can I have an exFAT partition for /home?

The idea would be to have a few shows on the sdcard, in /home/TV Shows, being able to unplug the sdcard, plug it onto a USB adapter and then into my Windows PC, so I can move files around.
I know that the home directory stores .kodi, so I don’t know if it would carry troubles or performance penalties while using the system.

Thanks for your attention.

This won’t work. Have you not considered installing the SMB server and simply accessing across your network?

That’s how I actually do it, and I don’t know if it is the SMB overhead or anything else, but it just won’t work properly, as it just uses to hang my Pi and I’m forced to reboot it through unplugging and plugging back the power connector. It’s a Rpi2 BTW.

Of the top of my head, I can’t think of a reason why you couldn’t use /home/osmc/TV Shows as a mount point. You could then store the files on a USB pen drive (ie not the internal SD card) and transfer the device between machines.

I don’t have any spare usb that is big enough atm.
Do you think your approach would work with a partition on the card itself as a mounting point for /home/osmc/TV Shows?

In theory you could make a third partition on the SD card, eg /dev/mmcblk0p3, and mount it over /home/osmc/TV Shows. That technique is already used with /boot. That said, IMO you would be better off waiting for a new USB drive.

Just to avoid confusion, the mount point would be /home/osmc/TV Shows.

That’s how I actually do it, and I don’t know if it is the SMB overhead or anything else, but it just won’t work properly, as it just uses to hang my Pi and I’m forced to reboot

Instead of a bizarre solution where you constantly move a USB stick around, why don’t we help you figure out why your SMB mounts are not working?

They work, but if I transfer a several GB file, sometime along the process it just diminishes the copy speed drastically and I lose SSH access.
Probably just overtaxed IO so it can’t answer later petitions until it finishes the first ones, which take a really long time since the speed gets so low.

Are you using Wifi or wired connection? Transferring several GB should not be a problem. I suspect that you have a basic network problem.

Are you trying to copy files to the Pi, or just watch them?

An iperf3 test may help see if you have an actual network issue.

It goes around 80mbps, there is no problem with the network. And it’s just copying. I can’t even see them in Kodi until they’re fully transferred.

Did you try it both ways with using the -R option also? Since you didn’t share the output it’s impossible to know how good you network really is, like are you getting retries.

Have you mounted the drives using fstab/autofs or are you trying to add them as a source in Kodi?

Here it goes the iperf: 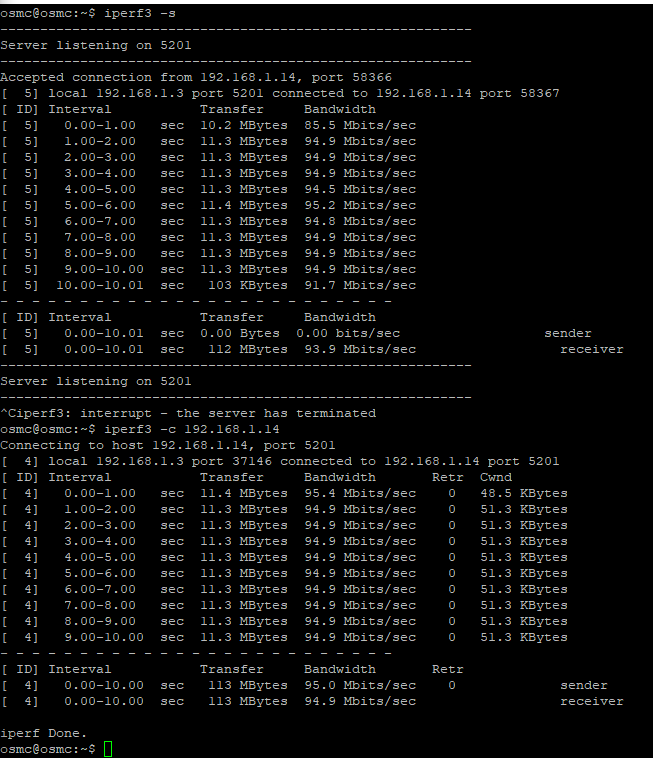 As for the drives, I don’t have any mounted atm. When I did it was just an external 2.5" WD automatically mounted by OSMC. And I have the problem whether I copy to this drive or to the sdcard.

As for the drives, I don’t have any mounted atm. When I did it was just an external 2.5" WD automatically mounted by OSMC. And I have the problem whether I copy to this drive or to the sdcard.

You need to start over with telling us exactly what you are trying to do. Are you trying to use a USB drive locally connected, or are you trying to access it via SMB? You seem to by trying both?

Automatically mounted drive, locally connected to Rpi (I even tried with a powered hub, seeing that it could be a power issue).
And I copy data from my PC in the network through SMB to that drive.

What is your ultimate goal? Do you want to have the media on your Windows system always available, or are you planning on always copying it to a USB drive or the SD card on the Pi?

In Linux, things that are automatically mounted usually have poor defaults for performance and no way to tweak the options to get better performance. I’m far from an OSMC “guy”, but I do know Linux.

The best solution for remote mounts is NFS.

Next best is CIFS (and it is about 30% worse than NFS).
The actual storage and file system used on the remote system matters greatly. FAT is slow. NTFS would be preferred if it is a Windows system with a spinning disk. Flash storage that isn’t SSD will always be significantly slower over the network.

If you have no choice except to use flash storage and FAT32/exFAT then direct connections is probably the best option provided you manually mount it and avoid gvfs/gio mounts. That means either using /etc/fstab or autofs to do the mounts. If the storage will always be connected and NEVER pulled, use the fstab. Otherwise, use autofs. The options and actual mounts are the same in both, but autofs is a little more complex to setup.
Of course, if the OSMC gurus here know that gvfs/gio aren’t used when mounting storage, then using these methods might not help at all. We need their guidance.