I’m puzzled. I’m running OSMC on my RPi 2, with all the media on an external USB drive plugged into the Pi. The drive is formatted as ext4.

There’s still like 15+ GB of free space on it, yet when I try to run mkdir it yells at me:

Also, when I run df it gives me this:

This is the output from df -i:

I read somewhere that it’s because I’m running of iNodes, but even if that’s true, I have no idea how to fix that. Plus, df -i strangely reports 1% for /media/osmcmedia - shouldn’t it report 100% if there were no iNodes left on /media/osmcmedia? And, df reports a 100% use when there are 15+ GB left on the drive, which is strange, too.

If you attach the usb drive to another device, are you able to write to it then?

By default the system holds 5% back for various reasons.

Reserved space for root on a filesystem - why?

By default the system holds 5% back for various reasons.

Actually, it is not “various” reasons.
On the system disks usually the OS holds back 5% to prevent normal users from filling up the disk. Root processes/user can still write down to it.
The main reason I however would leave 10% of free disk space, is that with less, the defragmentation algorythm does not work efficiently anymore.

Ok, I messed around some more.

If I plug the drive directly into my computer via USB, I can create folders and copy files to it just fine.

Also, like I said, system reports that I have ~18 GB of available space on that disk. 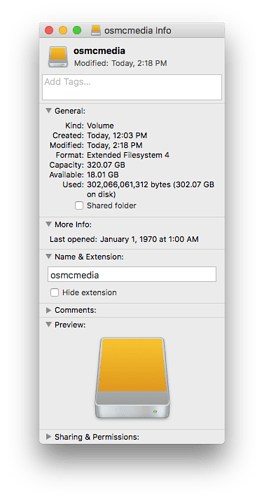 Here’s df -h result when ran on my computer:

My head is spinning at this point :).

The used figure is 289950488, not 227G. Of course, it confuses matters where you use df on one system and df -h on the other but the figures are consistent. What’s the OS of your computer?

I’m on a macOS Sierra.

I’m on a macOS Sierra.

I don’t use a Mac but I’d suspect it doesn’t impose the 5% reserved space. And on ext4 it’s way too much anyway. This is from the ext4 author: Re: Reserved block count for Large Filesystem

No, it does not. That’s the problem. I assume ext4 does not impose this much, either.

Whatever the OS or filesystem used to format the disk, if you format a 320GB drive, you should not end up with a drive with under 300GB space available. I’m totally puzzled.

I tried formatting it:

In all three scenarios the Pi does not see it as a 320GB drive, or even something close to 320GB.

I deleted some old movies just a moment ago, and here’s what the Pi reports from df -h now:

Ok, so I supposedly have 9.5G of free space on the disk now, so mkdir has no problems creating a folder now.

However, the Pi reports Use% as 97%, which is bonkers. The math is all over the place.

Am I crazy or missing something obvious here

UPDATE: I should mention that the disk itself is in good condition. If I format it as HFS+ (native to Mac) or even NTFS or FAT, I get almost all of the 320GB, as expected, not under 300GB.

it will show you how much is reserved.

If it is a data disk, you may want to run:

to disable the reserved blocks completely

You might find this educational. Gigabyte - Wikipedia There’s even a section marked “Consumer confusion”.

@dillthedog Ok, but regardless of how various systems report it, I do have plenty of free space, so should not run into Cannot create directory: No space left on device.

UPDATE: Or run into problems when copying a 4GB movie when having ~15GB of free space, and being told there’s not enough space on the disk to copy the file

Can you create a directory now you’ve freed up some space?

Yes. This doesn’t explain all the other things I mentioned, though :).

Plus, even before I’ve freed up some space, I had ~2G free, which should not prevent me from creating an empty folder, right?

To be clear, I’m not trying to outtalk anyone, just trying to understand what’s going on here, because it doesn’t seem right to me ;x.

Running tune2fs -m 0 /dev/sda1 seems to have fixed it. Pi now reports there’s ~25G of free space on the disk, where my Mac reports 26.12GB, so that seems to be about right.

I’d like to understand why ext4 needs to reserve so much space, though? If I format the disk as HFS+ on my Mac, I do not loose 5% of space.

There was some discussion about this a while ago.

Or reserve 5%, but with a cap of maximum X, e.g.: 5GB. That way you would still have enough space for whatever is needed, even on a 8GB card, but it would only grow up to 5GB, so user would lose only 5GB regardless of whether they’re using a 100GB, 500GB or 1TB drive.

I think the 5% reserved space is important to keep on the root partition and the benefits of reducing it if someone uses, say, a 32 GB SD card are relatively small. I see the real issue as being more about what to do on large external drives. Short of modifying programs like mke2fs, I’d have thought we’re stuck with whatever it defaults to. There’s nothing to stop us creating a Wiki entry about changing disk parameters but people would need to read it.

I agree, reserve the space. I’m just not sure if going with percentage regardless of the disk size is the right choice here. It’s fine to reserve 5% on a 8/16/32GB SD card, but on a 1TB drive - not so much.

Here’s to hoping a better solution will come along in the near future :).