@alexisuceta I’d already seen your logs, I suggest you use sam’s suggestion:

Hi Tom, I did the change like you said but still have the same issue, I can’t access the folders of the NAS.

I tried to add video source by entering the ip instead of browsing, but it is just the same. Keeps asking for password.

client use spnego = no

And then restart kodi?

No. The only password is for the router login.

If you you change the maxium protoocal version to SMBv1, under Settings, Services, SMB client (Settings Level Advanced); are you able to access you shares then?

Tried all four settings whit no change.
I have a third RPi3 that I haven’t updated and it works just fine…

What are your Network Place (Samba) Share / Cloud Disk settings on your asus router? 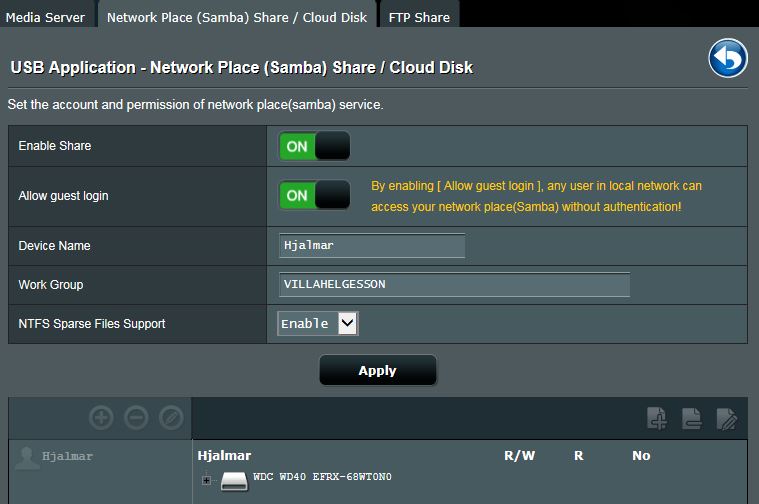 change max protocal to SMB2 and add this line:

These changes are not persistent after reboots of the pi, but this can be fixed if suggested changes work.

Good Morning Tom, I did the change but still have the same issue.

Note: When I add the 2 lines in the file /home/osmc/.kodi/.smb/smb.conf I can access the folders in the NAS Servers but when I restart Kodi the information is overwritten again.

Do I just add client max protocol = SMB2 at the end?

On further investigation, I can’t get kodi to honour the smb settings in /home/osmc/.smb/. I know this works, but probably isn’t recommend; so please only try this at your own risk etc…

add client use spnego = no and client ntlmv2 auth = no, to ~/.kodi/.smb/smb.conf and the issue this command.

sudo chown -R root:root ~/.kodi/.smb/smb.conf
I found kodi can still access the shares, but is unable to modify on reboot or atany point. I also found with my pi, the smb.conf was being overwritten every time I tried to access the shares. Once I ran the chown its no longer being updated by kodi.

Sorry a copy and paste error, please add the following:

I can’t get kodi to honour the smb settings in /home/osmc/.smb

Hi Tom, so basically you don’t recommend to apply the settings and run the command? Is it possible to fix the issue in a next update? Thanks.

We’d have to work out what the issue actually is first.

My situatiation is quite similar.
I have a Windows 7 computer and a NAS.
Besides I have a couple of RPI (a 2 wired and a 3 version wireless connected) both with OSMC installed.
From the RPI3 there no problem to connect to both file servers.
From the RP2 It can’t find either servers. But it can be accesed the other way around from the W7 computer with ssh terminal and https Kodi platform.
any ideas?
RPI2 log in: https://paste.osmc.tv/afocucodaz
thanks

No please ignore what I posted earlier, and do as fzinken suggested:

and add client use spnego = no and client ntlmv2 auth = no, to ~/.kodi/.smb/user.conf. Restart the pi and the shares should now be working.

From the RPI3 there no problem to connect to both file servers.

Did you upgraded both the Pi2 and Pi3 to the latest version?