Below is an attempt installing to an NFS Share. Using the latest image, always seems to fail in the same place, any ideas?

What’s the NFS export look like on the server?

(I’ll admit I’m using Hanewin on Windows since my Linux VMs are not happy at the moment), but it creates files/folders up to the failed file as per the log.

The export itself is just an export of a folder with no special options. It uses “mapall:0” due to Hanewin’s quirkiness.

Daft question - can I copy a working install from an SD card based install to the NFS share? Would help me isolate if its Hanewin related or not

Daft question - can I copy a working install from an SD card based install to the NFS share? Would help me isolate if its Hanewin related or not

Not trivially – but you likely haven’t customised things a lot. Copy ~/.kodi over?

Fresh installs I’m working with for my secondary Pi (I’m banned from touching the main Pi since it’s working fine!).

I have 2 SD cards and thought I’d have a go at an NFS based install. I’ll try the inode setting in Hanewin now (UTF-8 was already checked)

Failed while I was writing this…settings for reference: 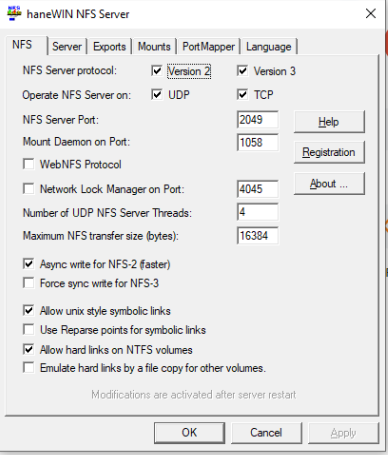 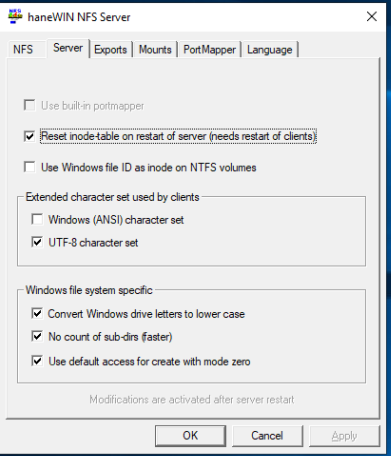 I’m not a Hanewin user but I’m sure someone else will be able to chime in.

No worries! I can copy from a Windows client just fine - I wonder what it is taking issue with for those files - is there anything special about them?

What mount options does the installation use for the NFS install?

What are the export settings?
Do you have no_root_squash enabled?

I don’t currently, I did before. I think in Hanewin-land that’s -maproot:0 ?

I don’t currently, I did before. I think in Hanewin-land that’s -maproot:0 ?

Well I don’t know about hanewin but looks logic.
You always can crosscheck from your other Pi by running showmount -e <IP>

Just a question but, are you just trying to do this because you can? Or do you expect some improvement of some aspect by moving to an NFS install? The issues that previously made NFS installs useful have generally all been resolved for some time. Just trying to save you from expending time that yields few results.

Mainly because I can (I’ve set up the second SD card ready to go), I thought it would be a fun thing to see in action.

The share mounts correctly from my other Pi and Windows (with NFS client support enabled), so I’m not sure what it doesn’t like.

Well, it’s got a lot further…comparing options, I wonder if it’s TCP vs. UDP related (I doubt it since the failure point is the same)

Sad face is normally that Kodi is crashing (or just not starting), so you should be able to ssh in and check the kodi log to see why.

SSH connection failing too, annoyingly enough. Well, it was educational, but I’m going to use the SD card I set up