I have been using OSMC for a few years now. I stopped updating past OSMC.16.02-3 Running KODI 16 compiled on 2016-Feb-21, and there is a simple reason I am using this version.

When I allowed the system to update (I believe around April 2016) I found that I could no longer access video files located on my windows computer using SMB. My network Hard Drive worked fine, as did USB, but nothing else. I tried many things to make this work again and in the end it was far easier to downgrade the system so I could have normal functionality.

Around December 2017 I had some issues downloading artwork for Movies/TV shows. Yet, it was an easy fix as I just downloaded the updated addons to fix this issue. 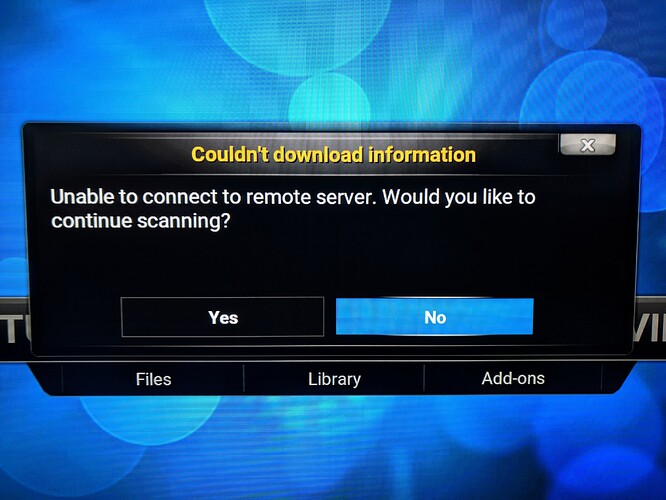 Yet it always comes up with the same error.

I know the normal response is to update to the latest OSMC and I am fine with that, as long as the SMB bugs have been fixed and I can stream from Windows 10 without issue. So to be safe I wanted to find out if there is a way to fix this without updating the system, only the files it needs to work.

thanks for the help.

I think your Kodi is too old. You need a scraper update.

You are two years behind on updates which will make things challenging. In future I suggest updating every month — it’s quite painless.

Take a backup of the SD and try to update. We only really guarantee an update path for up to 12 months however

Given your conservative approach to upgrading, which I can fully understand, it might be worth buying a new SD card and installing the lates version of OSMC to it. That way, you have a safe fallback route if you don’t like what you see.

Figured as much. Does anyone happen to know what was changed or if there is a file I missed that needs to be updated (aside from the system)? The error pops up when it finds new videos and tries to download the info from either IMDB, The Movie DB, or TVDB.

I want to update as a last resort, but I was wondering if anyone verify that you can stream video files from a Windows 10 computer now without issue?

You can still stream files, you just can’t scrape metadata.

Do you know what file I need to update then? These are the files I updated, can you see what I missed?

I update my files by searching this link Add-ons | Kodi | Open Source Home Theater Software as it appears the one I have listed in OSMC no longer works like it should (I am sure it’s because I have not updated the OS). I’ve even used this link http://mirrors.kodi.tv/addons/migration/ to see what I am missing.

As people have written, you are running an old version of Kodi that is not anymore supported. So addon updates will only be available for the current version.
As it was suggested install the latest OSMC on a new SD card than you have your old card as backup from which you can restore your personalized files

It appears that even though metadata.themoviedb.org-5.1.2 filename was correct, it was actually an older version 4.0.2 I didn’t notice it when I tried to update but noticed the issues when I went into the addon’s settings and saw the old version number. I redownloaded the file from The Movie Database | Kodi | Open Source Home Theater Software and it now works.

I really don’t know how that happened, but it works now. Thanks for the help

I know that I will eventually have to update, but no body has confirmed that playing video files from Windows 10 works now using SMB (or anything else). Can someone confirm that it is working?

no body has confirmed that playing video files from Windows 10 works now using SMB (or anything else). Can someone confirm that it is working?

It absolutely works and always has, though security improvements have broken the ability to browse to the share when adding sources. Adding manually by IP is fine.