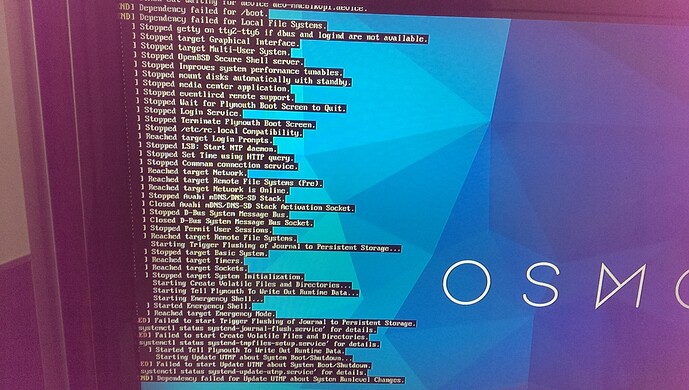 I have downloaded the rpi-1 image from this answer and put it into boot partition.

@hewittj I have built a Pi 1 version of the initramfs and I have tested that it actually works this time.

I ended up having to build it on a Pi 1. rbp1: http://collaborate.osmc.tv/index.php/s/OkpI7MylULUyF1Y/download rbp2/vero: http://collaborate.osmc.tv/index.php/s/q7fxVeIlDzMA1v6/download I have updated the Pi 2 version of the initramfs as well, a lot of further improvements have been made and what I have now is what will probably be shipped in the December kernel update, …

I have also updated config.txt and it indeed worked, only for two reboots! After two reboots I am again stuck at the boot screen.

I didn’t touch cmdline.txt as it shows:

I’ve moved your post to a new thread, because as far as I can see it has absolutely nothing to do with the initrd issues in the thread you posted in.

You’ll need to provide some sort of explanation of the issue you’re having and what you did prior to the problem occurring - the screen shot alone is not enough to know what issue you might be having.

In fact, I guess the initramfs method worked for me too. I was mistakenly using un-gzipped initramfs file.

I dont recall doing anything extraordinary before the update. I just OK’d the update, I think it worked for the first boot then hung on the second boot.

After the initramfs workaround I took a backup of .kodi directory and performed clean installation of 2015-11 image. Several reboots afterwards, no problem so far.

I’m still confused as to why you think you had the same problem as discussed in the initrd thread, and therefore why you think the new initramfs would help you ?

The fact that your system booted once OK after updating and then “hung” on the second boot makes it very unlikely that your problem is related.

Well I have found a another thread complaining about the november update pointing the initramfs thread and just blindly followed the instructions.

I do not have an external drive for the filesystem, or any external drive at all. Only peripheral I use is a usb connected logitech keyboard. I am not 100% sure that first boot was successful, maybe it hung up on the first boot. I don’t recall hacking underlying OS, I just installed some kodi add-on’s via GUI.