Hello.
I see often this question at subject forums and would like to ask if ther’re plans and possibility to add this functionality to current osmc skin support ‘from the box’. This would make it more usable and popular. Here is a description how to add it to ‘Estuary’: Audio and subtitle language icons for Estuary.

That’s one for @Chillbo to cover.

Hm… At the moment we only show information about the currently selected audio track and subtitle track during playback in the video info dialog - not the OSD. This actually makes sense: The info dialog is for information about the current playback, the OSD is just for the playback status.
Not using icons for this is actually a deliberate decision to fit the minimalistic look of the whole skin which doesn’t use any colored items except the background image/color and fan art (the video and audio tags in other views are not using any colored icons either).

I meant displaying this tags while listing in library mode like here: 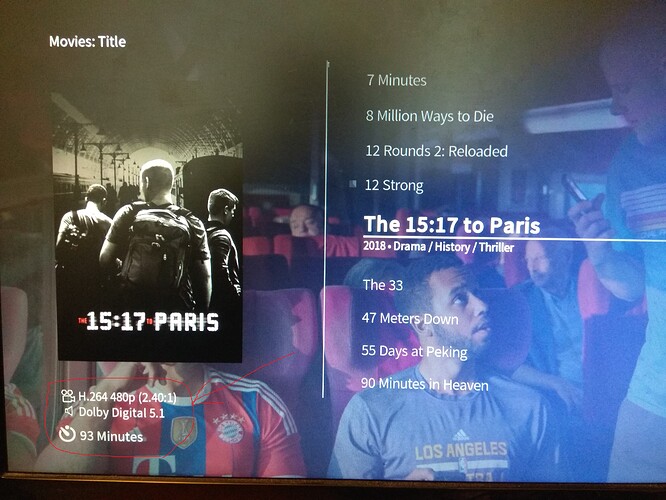 I’ve thought about this before… A) I really hesitate to add any colored icons in any way as we don’t have those anywhere and B) the audio tags in these other views represent just the first audio track. As we don’t show any secondary or even tertiary audio tracks (which is hard/impossible to do anyway), we haven’t provided any language information before. The question is what benefit this would give, if you can’t even see what languages are available for a movie file in general. These flags are just meant as a general, more technical information about the file. Audio tracks can be chosen and are listed with the language information during playback.

Representing language without a colored flag like some skins do it, is not too trivial. In the player info dialog we just use the 3 letter language code in caps. But this wouldn’t really look too good here IMHO. I’ll put some more thought into this, but atm I’m not too convinced why and how to add this…

It has been a while now, so I push this topic again.
We all might get lost when we are to close to a specific topic - sometimes it helps to step a step back and see the basic demands…let me give it a try:

Most of us have movies in different languages and/or multi language because the sources usually feature it. Since we live in a globalized world the audiences are getting more and more mixed with different languages. When choosing a movie from the library the language might be the most important criteria, depending on the people in the audience (Just thinking about a movie night with some friends or collegues).
So a simple “ENG/GER” tag would do an awesome job.
On the other hand there is a lot text showing us nerds the video and audio codec, the resolution and the aspect ratio. Which btw. looks very cryptic to most people. Do you unterstand how unimportant this information is when sitting there with a spanish guy, your best friends spouse from France and your chinese mother in law? I actually don’t get why three letter language code “wouldn’t really look good here” in comparison to the cryptic nerd info.

Since 20 yrs I add the language tags to the filenames, just to list the movies on a computer to make a choice before selecting it on the media center (first MyHTPC then Meedio and now OSMC). Some of my friends are actually using Tools like MediaInfo to make a list for movie nights because media centers are still insufficient covering the basic requirements.
Now in 2019, the year Blade Runner is set in, it might be time to change that.

Two users indicating interest in such a feature does not exactly indicate a high demand. In the interest of maintaining a skin that wishes to keep with a “minimalist” style, it’s unlikely that you would see such a function incorporated into the OSMC skin any time soon. But such is the beauty of Kodi, you have a plethora of skin choices, possibly that even already include your desired feature. Additionally, someone that felt strongly about incorporating such a function can reasonably easily find information on building their own skin or modifying another’s to meet their specific needs.

While I wouldn’t say it’s a super high priority issue, from the ‘minimalist’ standpoint I would certainly agree that if any metadata is to be shown by default the language/subtitle info is probably a lot more useful to most people than the video codec or number of channels.

Information about audio and subtitle languages is shown in the video info dialog (at least for the first 6 audio tracks). The “cryptic” information down there in the bottom left corner can be hidden, if not important, via a skin setting (at least in our staging repo - it will be available with the next update). I’ve reworked spacing and formatting of the media flags (the “cryptic” stuff) and there’s simply not enough space in all scenarios to add even more information. It would have to be a decision towards completely different information down there instead of the information currently shown.

In what way does showing the language of the FIRST audio track change your choice which movie to watch? Isn’t it way more useful to be able to see a list of which audio/subtitle tracks a movie features instead of just that first one?

Everyone is certainly entitled to their opinion as well as their choice to use whatever skin suits their need best.

Quite by chance I was just watching something on MUBI. Notice what metadata they choose to show. On the AppleTV interface the resolution, duration, language and subtitle language are even more prominent … 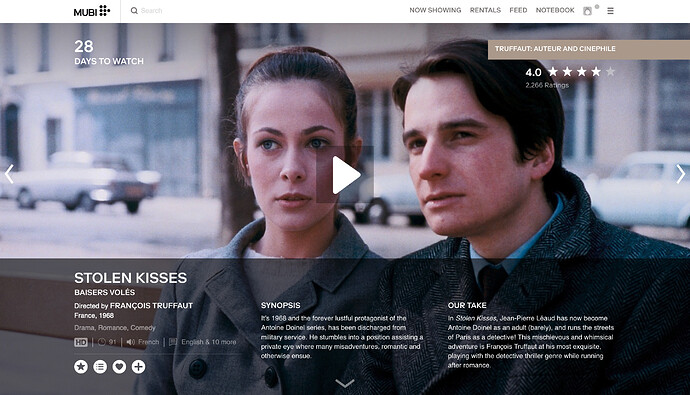 After some thinking about how we might be able to implement this without compromising the minimalistic approach, we’ve come up with the following:

The media flags in the bottom left corner now show file information as well as language information (for audio and subtitle streams - the first four of each) in an alternating manner - switching back and forth between the two after 5 seconds.

The file information media flags (what has only been shown before): 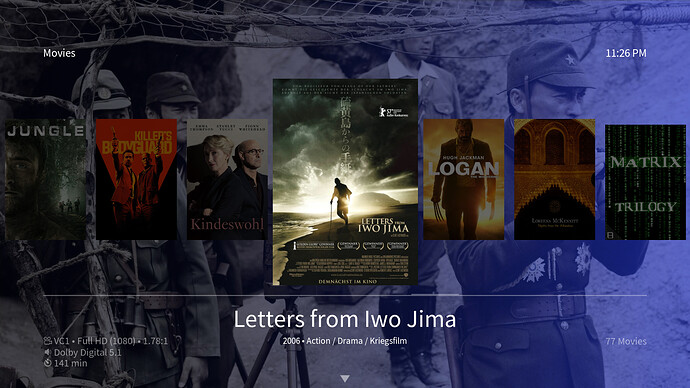 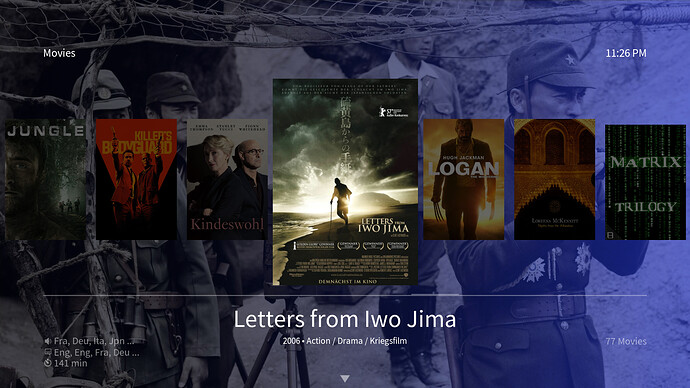 You can toggle whether the language or the file information is shown first with a new skin setting: 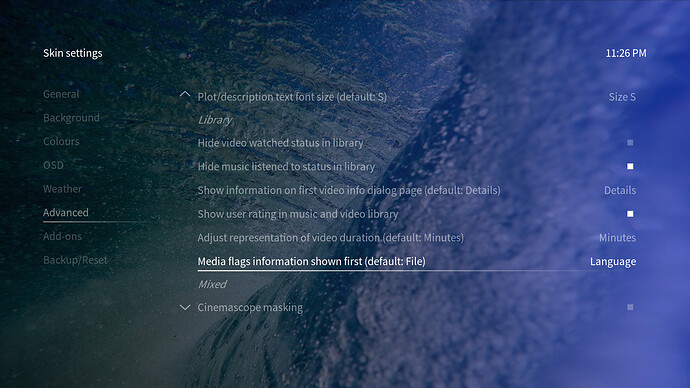 If you’d like to test this, you may follow these instructions to get to our staging repo (this is our experimental, non-stable testing branch!):

This seems like a decent compromise. Works for me!

However, I can see I have many films where one or both the language(s) or subtitle(s) are not showing even though there are definitely subtitles available, either embedded or as external files. Presumably because the metadata is missing?

On the problematic files… try to run them trough mkvtoolnix and make sure the subtitles and audio tracks are properly tagged. Sometimes people doing this things get lazy and don’t properly tag every subtitle and audio stream muxed into the mkv

The metadata required for a skin to show these information are sometimes problematic. We’ve seen this in our team as well - some files don’t seem to populate the required database entries properly for some reason, sometimes it does seem to work suddenly with some files that it didn’t before for some reason. But unfortunately that’s an issue the skin has no bearing on.