Hi, last week when I let OSMC run an update, it halted on the console text screen with a bunch of errors (can’t tell you what they were now, sorry). Since then the pi won’t start up with that sd card, it just gets the red led, and no action from the green led, no hdmi output.

I’m successfully booting a fresh OSMC install on a spare smaller sd card, and I’ve connected the original sd card to the pi with a usb card reader, trying to figure out the problem. fsck seems to think the linux partition is fine (e: having said that, I did let some mac app Paragon ExtFS have a crack at repairing it first, it supposedly repaired a bunch of inodes), as for the fat partition it said the dirty bit was set and the fat tables didn’t match, but after fixing that the card still won’t boot, red light only.

Obviously I’m a dumbass for not having backups, but I had a nice configuration going with transmission, flexget, a dynamic ip updater, and god knows what else, that I’d like to try and rescue if I can. It’s not all contained in the osmc home directory, but I wouldn’t be able to remember where everything went.

Starting with just getting the pi to boot, not worrying about whether the whole system works yet, is there a good place to start to get past the red-light-only stage? Rewrite the fat partition? Replace some linux boot files?

Any help much appreciated, thanks!

Screenshotting and uploading a picture of the contents should make it clear if there’s a problem with the FAT partition. This partition should be visible on most machines.

Try a Gparted LiveCD to repair the ext4 partition.

Thanks for the reply. Gparted thought both partitions were fine, didn’t find anything new to repair.

The contents of the fat partition looks fine, but I don’t know for a fact that all the files’ contents are intact. Replacing them would be an easy thing to try I guess. 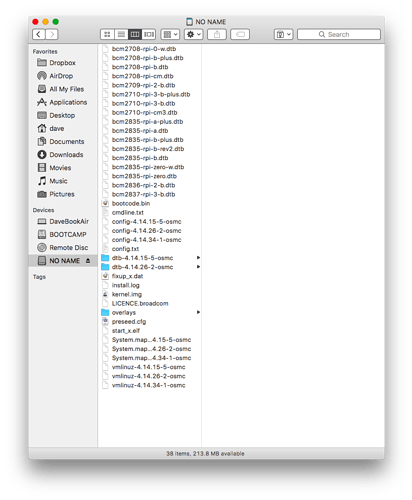 If it’s not the fat files then what would be the first files to look at on the linux partition?

There wouldn’t be specific files on the root partition to look for, but you could at least back up stuff if you can mount the partition OK

Check if the LBA flag is still set on the FAT partition.

I googled for the pi’s boot sequence and reading this page:
https://www.raspberrypi.org/forums/viewtopic.php?t=58151
it was sounding more likely that red-light-only meant it couldn’t read the firmware from the fat partition. So I dd’d the fat partition from the new working OSMC sd card to the old one, and now the pi starts up.

OSMC boots successfully now, and things are looking fine, tho I’ll be keeping an eye out for any fs-related problems. OSMC is offering me an update again, I’m gonna back everything up before trying that again, fingers crossed.

grahamh’s reply just popped up. Yes it’s listed as W95 FAT32 (LBA), was the same on the new OSMC installation, is that an issue?

is that an issue

I don’t think it will boot without LBA but it may still show the contents. The BOOT flag is not necessary.