Got a bit of a strange one here but I’ve recently switched back to the OSMC skin after trying some alternatives. Long story short when I used to use the OSMC skin, and for all the others I tried, when music is playing, after the 3 minute wait instead of the screensaver kicking in it would switch to fullscreen music and the Artist Slide Show would run but this no longer seems to be the case. Now after 3 mins the screensaver (Dim) kicks in and even if I manually go full screen so Artist Slide Show is running the screen still dims after 3 minutes.

I’ve gone through the settings and all looks ok, the only things I can think of are that there’s been a change in the OSMC skin to change the behaviour since I last used it or that when I briefly tried using a visualisation instead of Artist Slide Show I’ve somehow messed up a setting somewhere.

Any thoughts or suggestions?

Since I’ve been working on the skin, the music fullscreen window has never automatically popped up during playback. A manual return button press on the home screen is necessary to get to that window.
But it’s actually a good idea to see whether this can be done on any screen at any time (switch to music fullscreen playback after some seconds of idle - maybe adjustable).

For the time being, you have to go to the music fullscreen window (or visualization window) manually from home screen. The dim screensaver can be deactivated under Settings/Interface/Screensaver.

Thanks for the reply but the plot thickens…

I restored a copy of guisettings.xml that I had from a couple of days before the issue occurred which put Kodi back to the previous skin. I tested and checked that fullscreen music window with Artist Slide Show opened after three minutes which it did. I then switched back to the OSMC skin and got the same behaviour.

I then compared this new guisettings.xml with the one that was “broken” and the only relevant difference I could see was in the <musicplayer> section:

So it looks like it was something to do with me adding and then removing a virtualisation addon that left something behind but doesn’t explain why what I think of as the correct behaviour isn’t what the skin is meant to do.

Confirm this behaviour:
Although Use visualization if playing audio is active at settings -> interface -> screensaver with OSMC skin and Dim screensaver, the Dim screensaver kicks in while playing music instead simply let continue playing the Artist Slideshow configured at

settings -> player -> music -> Visualization gives you no option to configure anything but file /usr/share/kodi/addons/skin.osmc/16x9/MusicVisualisation.xml seems to have hardcoded

(not sure, but onload could also mean that for changes to get active you’ve to restart the mediacenter? Ways too complex to configure this from my point of view!)

I’ve tested this here on my test setup… The visualisation part was broken with our skin when activating the “Background visualisation” setting in our skin settings. This should be fixed in a new update.

On my test setup, the setting to use the visualisation instead of the screensaver when active was respected: no dimming happening when visualisation was active. So, on a clean and “normal” setup it should work fine.

But it’s actually a good idea to see whether this can be done on any screen at any time (switch to music fullscreen playback after some seconds of idle - maybe adjustable).

This I’ll look into now. Let’s see what can be done.

Re the Artists Slideshow addon: As discussed in PM it’s probably something that can’t be changed. This addon is not recognised as a visualisation addon by Kodi and therefore the screensaver will kick in. I don’t see a way I can change this on the skin side of things.

I’m the maintainer of Artist Slideshow (also a Vero 4K+ owner, so I’m not stalking the interwebs looking for mentions of AS or anything), and I just thought I’d chime in to say that @Chillbo is right. There is no way for AS or the skin to tell Kodi not to activate the screen saver. AS is technically a program addon that just tells the skin where to find the right folder of images. I looked a few years back at having an AS visualization, but the programming framework Kodi uses for visualizations and screensavers is completely different than what they do for addons, and there doesn’t seem to be much documentation or support for it. So we’re kind of stuck where we are. If you want to us AS, you have to turn off your screen saver.

Just FYI, I saw in another thread that at some point Kodi started allowing Python based screen savers. So now I’m off to figure out how to add that as an option to Artist Slideshow so that it could work without requiring skin support. It probably won’t ship until Kodi 19, or at least not until there are good options for testing Python3 based addons, as I’ve already done most of the work to make AS run on Python3. Hopefully when I do it will be backward compatible to Kodi 18.

Thanks for these updates. I’m confused how this ever worked for me as it sounds like it definitely shouldn’t but if it is something that can be properly implemented going forward then that is good news

This I’ll look into now. Let’s see what can be done.

I’ve been able to implement this now: 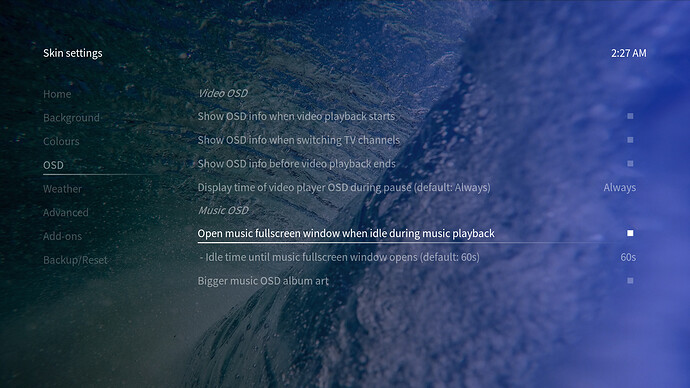 This will be part of the next update