Well i tried to change the Skin from OSMC to a different one called Estuary and the CPU usage dropped from 50% to 7-9% !!!

Not sure if this is too old to reply to, but I have a Pi 3B that I’ve installed OSMC with Kodi 18 on. On v17 it was fine, but on 18 it overheats regularly. 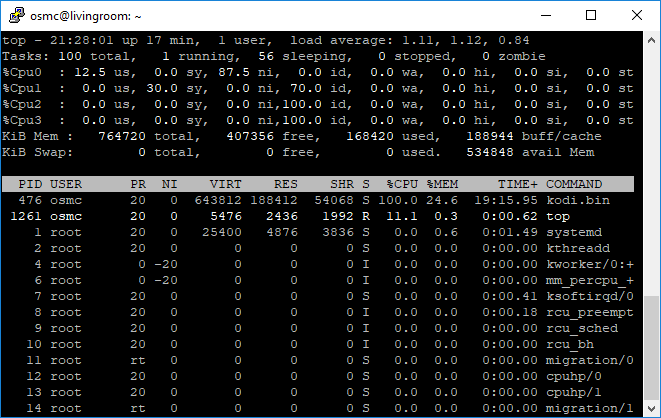 kodi.bin chews up one core as hard as it can. I’ve dropped the CPU speed to 1000MHz to try to alleviate it. Doesn’t matter what skin is active (tried OSMC, Estuary and Confluence), and this happens even when at the home screen with only the static banner in the middle and the clock.

Updated tonight to 18.3 RC1. Also, it takes maybe a minute to open My OSMC.

Post logs and maybe something will stand out but your system doesn’t look right. Top should be using around 1% CPU, not 11.1%.

Yeah - that was just a spike on Top. It’s normally sitting around 1% when it’s running, and was every other time I looked at it - it’s just when I took the screenshot it had spiked.

It’s settled down after a reboot, but I’d already rebooted several times by then (including dropping the clock speed to reduce heat).

I was thinking more along the lines of grab-logs -A.

Nevertheless, I see from that small snippet that you might seem to have installed an Amazon Prime add-on. Try disabling it.

That 87.5% “nice” figure in the top output is a bit strange. Just a long shot but it could suggest something like a (bitcoin) mining process that’s trying to keep a low profile.