My Pi’s samba shares that show up in the Finder (Mac here) are displayed as: “Samba Shares on OSMC” (OSMC is my hostname), like this: Dropbox - File Deleted

I want to change that. I managed to do it once, by ssh’ing into my Pi and editing some file, but that was a month ago. I’ve sinced switched to a newer Pi, and for the life of me can’t remember which file it was. I only remember it contained a string like “Samba Shares on %”, or something like that, where % was a placeholder for the hostname, which was pulled automatically.

If anyone knows anything, please let me know, because it drives me crazy :). That name is ugly and too long for the Finder, I would like it to show up as “OSMC Shares” or something similar.

P.S. It’s not in /etc/samba/smb.conf (or I’m blind, because I’ve scanned it about gazillion times already).

P.P.S. Hope I posted this in the right section.

Changing this file would be overwrriten on updates however.

I know it’ll be overwritten, but I don’t mind changing it when it happens. After all, it’s not like there are updates every hour.

OK – it will also only update when we update the Samba package, which isn’t very often.

Even better! Thought it’ll get overwritten on every OSMC update :).

@sam_nazarko By the way, is there a way to revert back to previous version’s skin? Estuary is really nice (I especially like improved typography and spacing), but I also really liked having a flat color/slight gradient as a background, instead of a wallpaper :).

Even better! Thought it’ll get overwritten on every OSMC update :).

@sam_nazarko By the way, is there a way to revert back to previous version’s skin? Estuary is really nice (I especially like improved typography and spacing), but I also really liked having a flat color/slight gradient as a background, instead of a wallpaper :).

Confluence is still available.
We have updated the OSMC skin as well to be a bit more modern and fix some issues.

My boot folder is showing up as a samba share alongside the osmc folder containing Movies, TV Shows, Pictures and Music: 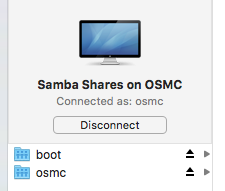 Is there a way to prevent that? I want only the osmc and other folders from my smb-shares.conf to show up, without the boot.

Does removing the automount in /etc/fstab help?

Remove x-systemd-automount, noauto options. This is probably the issue and would have been introduced by

[installer] [target] Speed up boot: only mount /boot when requested by adding noauto,x-systemd.automount to /etc/fstab 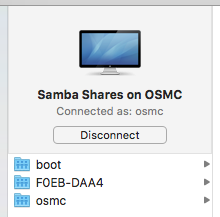 Okay – removing the line completely in fstab means UDisks will mount it and use the partition label / ID and mount it to /media (hence the new share).

And boot still shows up. It shows up both when I connect as a Guest and as the osmc user.

Ok, will do some digging tomorrow, it’s a bit late now

Ok. I’ll make a fresh install of the newest OSMC + install Samba to see if boot gets mounted, because now I can’t quite remember if that was a problem from the very beginning or showed up later, after some tweaking with various things on my part.

Sadly, boot still shows up as a samba share alongside osmc after a fresh OSMC 2017.02-2 install and installing samba from the App Store.

Issue resolve with the help of a user on IRC. Thanks @bonelifer.

True, this seems to do the job, thanks again.

P.S. Would be great to know, though, if /boot showing up as a share by default in the newset version of OSMC is intentional or not (because I could swear it was not showing up when I was still on 2016-12.1).

Had to reboot my Pi and now /boot is showing up again ;x. Not sure what happened there.

To be clear, veto files = /boot/ is still there in /etc/samba/smb.conf, I rebooted both samba and the Pi several times - but no luck, /boot keeps showing up as a share.

Ok, so I found the “culprit”. It’s the [automount template] in /etc/samba/smb.conf:

If I comment that whole template out, the boot folder is not showing up as a samba share. But then, of course, nor do any external drives connected to the Pi via USB.

I tried veto files = /boot/ within the [automount template], but it doesn’t work.

Any ideas how to solve this?

P.S. As for this moment, my solution is to comment out [automount template] and add my external USB drive as a separate share. It works, but it’s not a great solution; it won’t show any other external USB drives automatically, should they be connected to the Pi, I would have to create a share for each.

Found in /var/lib/samba/share a file name boor. If you delete it, the I desapear… Config is too much comlicated to understand…

@Roziek - I am a little confused if this is solved? The thread has a marked solution, but you later commented that the solution did not actually work?

I just installed OSMC on a new box (Pi 3) and also see the “boot” folder in my SMB shares. So I am interested in a fix, if this worked. Thanks!