How will I not pay extra taxes when importing from UK?

Btw it arrived on Monday, but the status on Deutsche Post website didn’t update, so I went to my apartment today to check if I had any note in my mailbox. They left a note with the pick-up location and the fees I have to pay on pickup.

Btw it arrived on Monday, but the status on Deutsche Post website didn’t update, so I went to my apartment today to check if I had any note in my mailbox. They left a note with the pick-up location and the fees I have to pay on pickup.

That’s annoying. I don’t know if you put a number at the checkout, but we do pass that phone number to the delivery company, so they could’ve called.

Pretty sure I did. But I just registered my phone number on their website so the next time I will get a notification on my phone instead of getting a note in the mailbox.

Well, now I’m totally confused. I expected you would have to pay 19% VAT on importation to Germany from the UK unless the German VAT was included in the £99 you paid. I think OSMC does not apply VAT on exports to Europe at “point of sale”. Either Deutsche Post don’t know what they are doing or there is something else I don’t understand.

As for the tariff, that is set by the European Union and depends on “rules of origin” (which I also don’t understand). I thought customs fees and duties didn’t have to be paid unless the order was more than €150. Maybe the tariff is something different.

The questions I would be asking (if I knew who to ask) are:

I’ll stick with buying stuff from suppliers in Europe for now.

We have some EU resellers and the plan is to grow this in the future - you should find pricing the same.

We also sell on IOSS supported platforms like Amazon and eBay which guarantee no additional fees because they collect and remit VAT automatically. They are more expensive though because they have higher fees than a standard payment processor would.

The questions I would be asking (if I knew who to ask) are:

I was asking myself exactly the same. Especially the first one: where is the 19% VAT? First thing that came to my mind was also that Deutsche Post don’t know what they are doing. I think it is safe to assume that they made a mistake. Look at this link where the new rules as of 1st July are explained. They even have an example there. I used the browsers built-in translation functionality to translate it to English for you. 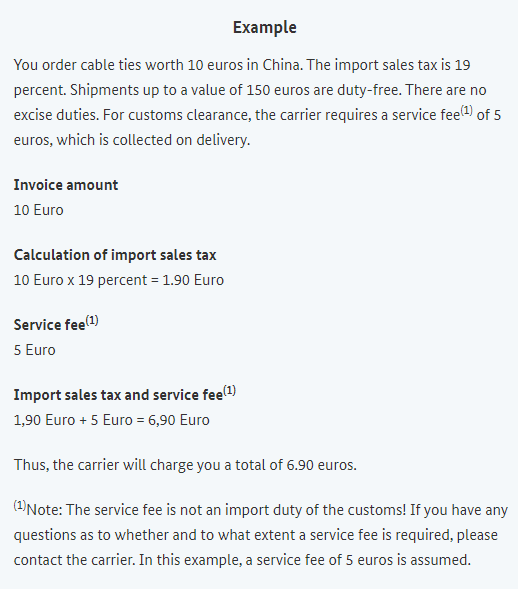 You must have gotten lucky. In Denmark we pay 25% extra in VAT and over 20 euros in handling fees. And I haven’t seen them make a mistake yet.

Finland (happy) case here: just yesterday I picked my Vero 4K+ from post office.
A few days ago I got SMS+mail notification from Posti (postal services) about a parcel in customs.
Here we have two options: let Posti handle with customs, for a 20 EUR fee or do it yourself.
I chose the latter route and for that I asked in another thread about the product code to put in the customs forms.
Done that, I paid 24% of 114.63 EUR (which is whatever customs converted the 99 GBP price to), plus 2.90 EUR to Posti as service fee. Couple of days later I got the parcel.

BTW Sam, nice try with the 10 GBP as parcel value in the CN22 form

BTW Sam, nice try with the 10 GBP as parcel value

Defining the value lower than it actually is sounds like fraud.

Today has arrived my package in Italy.

Shipped on 18-08 and arrived today so, exactly 1 week. Nice.
Service fee was 4,55€, no extra VAT or taxes. Super nice (I was a little scared reading other experiences)

The only one of these which I think has worked correctly is bitwatcher in Finland.

As far as I can make out, it is the sender who is responsible for putting the correct value on the CN22 and any offence committed by putting a false value is in the sender’s country, but maybe the Vero only costs £10 to make so that is the value to OSMC. Even if that is not true, the UK government is unlikely to prosecute anyone who is shipping stuff out of the UK.

Countries which rely on the value stated on the CN22 for calculating tax and duties are deluding themselves about applying taxes correctly. In the past, when I have bought stuff from America, the customs people here in Poland asked me for an invoice and a link to the web site where I purchased it. Finland must also be doing something to determine the correct value for tax purposes. Germany and Italy are clearly not so well organised.

As for agents outside the UK, I don’t see a way to find these on the OSMC web site and the one I know about in Poland still requires a minimum purchase of 10 units.

I have to correct myself.

I wrongly stated that I paid not VAT because I assumed 22% VAT is 22£ so when I only had to pay to the mail-lady 4,55€ I assumed it was only service fee.

BTW Sam, nice try with the 10 GBP as parcel value in the CN22 form

We don’t use the CN22 for declaring value anymore. This is done electronically on the shipping label and submitted via eCustoms (some Royal Mail system handles all of this for us).

CN22 is only used to show HS code and EORI (if customer is VAT registered) and is not filled in.

The full value of the items is included on the commercial invoice and electronically.

So it looks like they charged you the correct fees for you country in accordance to how we declared them with the shipment.

Unfortunately at this time, it doesn’t make sense for us to enrol in IOSS and send goods this way and instead rely on the country’s local customs authority to handle this.

The full value of the items is included on the commercial invoice and electronically.

So it looks like they charged you the correct fees for you country in accordance to how we declared them with the shipment.

I’m not complaining, but at least in my case, when I accessed the customs website, the only pre-loaded value was the name of the sender, I had to fill both the value and the item type (and based on that they calculated on the spot the extra charges).
Not sure if e.g. I have let Posti handle the case for me, they would used the provided declaration.
Just FYI.

Oh BTW, because I’m officially the “importer”, I’m responsible to keep (for 6 years I think) the documentation with the invoices, etc. to prove what I declared.

Now I understand why VAT has not been charged correctly to the customers. The CN22 is the international form for customs declarations and it is supposed to contain the value of the goods. The electronic system is only for use by HMRC Customs and Excise in the UK. (How many countries in the third world have access to systems which allow them to read electronic data from the British customs systems?) If the Royal Mail systems are not putting the correct value on the CN22, then that is a failure in their systems.

It looks to me like OSMC are committing an offence by putting an incorrect value on the CN22. Having entered the correct value into an electronic system they have provided a data trail for their actions.

CN22 is completely accurately electronically. The paperwork version has a notification to check electronic version as well with a QR code.

The CN22 is not used – but we had to add it for dumb reasons, like customers in Northern Ireland not getting their goods because of a lack of CN22.

How many countries in the third world have access to systems which allow them to read electronic data from the British customs systems?

The data is remitted to the local customs authority. In your country, this information is automatically submitted to Służba Celno-Skarbowa.

If you’ve purchased a product from us and believe that the customs declaration form is wrong, as matter of urgency, please contact support@osmc.tv.

To be quite frank: once you have paid, we send the thing. It’s not much of an odds to us what the value is on the form, so we put the full value and shipping costs. We tried to do the DDP option for a while which we did until 01/07, but since then it’s just much easier to send things DDU.

I am lost for words – it seems that some people complaining haven’t placed any orders at all.

It looks to me like OSMC are committing an offence by putting an incorrect value on the CN22. Having entered the correct value into an electronic system they have provided a data trail for their actions.

I’ve checked this and it doesn’t look like you’ve placed any order, so I’m confused where your accusations are coming from. If I am mistaken, then please send me a message either on this forum or raise a support ticket.

The UK chose to leave the EU. We must respect this decision.

If you want our products, you should be prepared to pay your countries VAT rates as well as any import duties and handling fees leveraged by your local customs authority. Alternatively, you can buy from a local reseller.

I am closing this topic. There will be nothing further to learn from it.

If we choose to adopt the IOSS scheme or there are changes to the current UK and EU agreements, then we will update this accordingly on the site.

The UK enjoys preferential status and since February, the last place of significant manufacturing for the Vero 4K + has been in the UK – which is something we are proud of.