have you tried pairing from within OSMC? That’s how I paired mine.

this earlier post from me may also help steer you to some success. Although its not really about the initial pairing but the steps that follow.

For anyone struggling to get NES30, SNES30, SFC30, FC30, etc. working, see this post on the 8bitdo forums on a work around I discovered. http://forum.8bitdo.com/thread-475-1-1.html It is definitely not a bug in Retrosmc, Retropie, or emulationstation. Hopefully, 8bitdo will fix this but if not my work around is good enough for me.

Yes, I was able to pair the controller, but still emulationstation says ‘No gamepad detected’.

When I click on your link I get a message that the topic was either removed or is under moderation. What do I have to do from here

Thanks jboy! The udev rules did the trick. Now I just need to figure out how to configure the controller in the various emulators. It seems to work in emulationstation itself, but I wasn’t able to play any of the port games with it.

Done that! thanks… just have to look for the UI Cancel button…

Edit: Keep the reports coming though

in general, there are huge issues with pulseaudio. Whenever emulator freezes, kill pulseaudio solves the issue, game can be loaded and played

Thanks for this report. Unfortunately this is a pretty special usecase and I am not even sure if a normal RetroPie distro will handle pulseaudio well.
If it uses it as default sink and has problems with it I can only suggest to disable or uninstall it for now.
Also I am not able to test this myself right now as I don’t have a bluetooth audioplayer.

The alsamixer command works for me but that is only using the internal soundcard of the pi.

I understand that. I’m just curious if other users have the same issues as me.
Anyway I will describe my issues in the topic mentioned earlier as well.

fyi, I don’t know maybe it is a placebo effect, but because of curiosity and some minor issues, after retropie instalation I had “updated” retroarch, emulationstation, sdl1 and sdl2 from sources and now despite the issue with pulsseaudio, music and gameplay seems to be much better.

I would ask if those bluetooth controller that works with Android phones and tablets will works on Retrosmc?
I have a bluetooth dongle working on OSMC, even i use my bluetooth headset without problems…

Not sure as it depends on the support in the os and controller type. When you try, let us know if it works.

Be sure to completely remove your ~/RetroPie folder before launching install-retrosmc.sh.

Hi all,
was anybody successful to run one of the PSP emulators in Retrosmc?

None of the Roms work with any of the two emulators for me (PPSSPP and LR-PPSSPP), despite they are on the RetroPie Wiki compatibility listed of running…

I am using the RetroSMC version installed with script 0.007. Other emulators work fine (PSX, all N64 emulators).

Reinstalling the PPSSPP emulator via the Retropie menu did not change anything.

Two Runcommand logs below, one for PPSSPP and one for LR-PPSSPP:

N64 works for me. Do you run hyperion by any chance?

I must say … I’m quite pleased

Since I was still running with the previous version 0.006, I was a bit hesitant …
Ran the setup like mentioned on a new system … it took ages I must say … but well … a lot of stuff to install off course

I saw some errors about libsdl1 and libsdl2 like mentioned here before.

By accident I ran the install again … ahhh well … lets see if it installs libsdl1/2 now … and it did!
Like mentioned before … again it took ages

The pairing worked as well, but I saw in the log … no bluetooth … forgot to enable Bluetooth

I pressed the PS button and it connected … started RetroPie and saw that it was detected!
Looks like my install guide for the PS3 controllers is no longer needed

Hello, i have installed latest retrosmc and all it’s ok but i have a problem.
When i install the addon script can’t appear il PROGRAMM ADDON…
why ?
I have re-ttyed 3 time…
nothing.
ThanX

Is there any error shown while installing it?
Scroll up after selecting the addon install to see the output and paste it here or to pastebin. 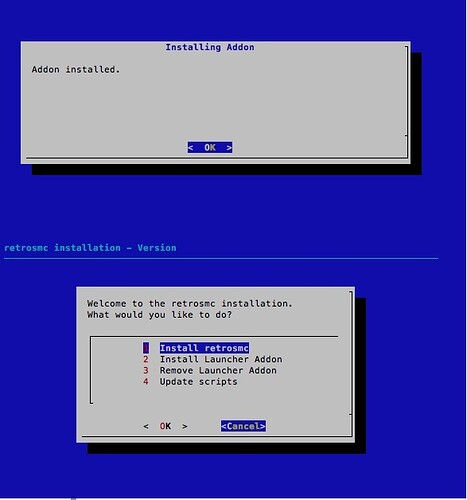 Didn’t get Launcher addon to install either, said “Addon installed.” but nothing new in Kodi-interface.
Removed it and tried again, just “My OSMC” under program menu in Kodi.

Tried staring it from ssh and it worked like a charm, just have to reconfigure the Gamepad I used.

Please scroll up one or two screens more. I’ll have a look, too when I get home.