What i need help with is this …I used the newest osmc installer and i choose wired network and the newest version of osmc(i have tried earlier versions with the same result) it says it will auto boot and install then when its done it should boot up into xbmc ,…my problem is it seems to be doing everything right except the very last part …it doesnt boot into xbmc but instead boots to a black screen with the osmc letters in the top left corner and the time and date in the top right hand corner rest is black no other icons no nothing and it seems to just sit here i dont know what to do next or how to get it t o boot into xbmc like its supposed to!

it doesnt boot into xbmc but instead boots to a black screen with the osmc letters in the top left corner and the time and date in the top right hand corner rest is black no other icons no nothing and it seems to just sit here i dont know what to do next or how to get it t o boot into xbmc like its supposed to!

Well first xbmc is now called Kodi and the screen you see is the Kodi screen with the OSMC skin. You might have to increase the contrast to see the menu correctly.
If you reallu think it didn’t boot correctly try to ssh into OSMC and provide logs with grab-logs -A 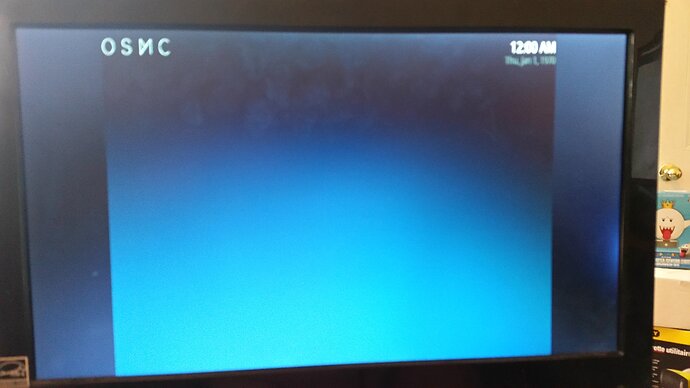 Please access the commandline as @fzinken advised before. Provide the resulting URL after issuing grab-logs -A command.

I read what @fzinken wrote and i would do that if i knew a way how because as of now this is as far as i can get and without knowing the ip i cannot ssh into the setup in order to grab logs or is there a dif way to get to the log files ,can it be done manually from an sd card reader and lookin on the sd card itself otherwise i have no idea how i am ssupposed to get to the logs without being able to get to settings to get ip…I am very sorry if i am missing something but i am just learning the pi.

Log into your router interface to determine the assigned IP address of the Pi. We’ve never seen your issue before, even with the thousands of users running OSMC. There is a bit of a learning curve here but what we are asking really isn’t that steep. If we can’t get in to see what the issue is then I don’t know how we can help you.

But you’ve said that a wired connection works?

yes thats what i thought because when i hook it up wifi it shows the time as jan 1 1970 but when i hook it up wired it shows the correct time …however im using putty to ssh but when i load all the connections that are to my router right now it only lists my main pc and my wifes pc as ethernet and then the rest are wifi and shows as 2.5ghz and its my android phone and two iphones as well as a printer there is no other ips in the router at all …only the connections i just mentioned so of course when i slap all these ips into putty just to try of course they all fail to connect …am i doing the install wrong maybe …i am using a fresh brand new 8gb sd card formatted to fat32 then using the osmc installer i pick wired and the newest release i then tell it to write it to sd card and it asks if i am sure and then it does its thing and i take that and put it directly into the raspberry pi and i boot up and it says its formatting then installing and then it reboots and comes to the screen you see above …nothing else can be done after that and i have tried installing an older version of osmc and still no go

There are other ways to get command line access.

Well this is weird…do you have another SD card to test a fresh install ? I’ve never seen this bug before so i am guessing its some type of hardware thing. At first, change all your peripherals.(keyboard, wifi, sd card) and test again. I know its a long shot but at least you’ll know if any of them is causing problems.
Also how are you copying the image file to the SD? I am using Win32DiskImager-0.9.5-binary and never had a problem. Maybe your card is getting corrupted? I dont know.I am no expert. Just thinking what i would do if i was in your shoes.

I’ve had some wifi problems of my own with previous osmc releases, and i am guessing they were all hardware related…but once they added support for my wifi stick, everything was fine after that.

you executed the command wrongly, it is grab-logs -A with an upper case A not lower case

And definitely you are connected otherwise the upload would not have worked so just execute ifconfig to see the IP address you are using so that you can connect with ssh from here onwards.

First thing is i wanna just say thank you to those who replied I am very greatful for your help and I am very sorry for wasting your time …
I spent the better part of yesterday doing all i could to figure this out! After confirming with my friends raspberry pi it seems i was delivered a bum one so the fault here lies in the hardware most definately …The raspberry pi that was sent to me will not let the interface fully load …after many tries yesterday i was able to get it to boot once with a menu but it wouldn’t detect my mouse or keyboard and at that point i tried everything right down to dif brand sd cards with no luck at all but when i tried the installs on my friends they boot right into kodi like its supposed to so i am in the process of just returning this pi and grabbing a different one!
So again i apologize for the waste of time but its definately just my raspberry pi that is broken!

No worries. At least you know now what’s wrong.

gl with the new one!