I recently did a fresh installation of OSMC and decided to have a look at my wifi performance using iperf3. I followed the steps outlined here Here is the result of that process:

Something is evidently missing from my OSMC installation?

Thanks for any help.

Please provide the output of:

Here is what I got:

Your PATH looks ok, but ldconfig (its “l(ell)d”); being missing from the which command is not good. You can double check if it still present with the find command:

Even if it is I suspect you SD card is failing. I would install to a fresh sd card and restore your settings.

One quick followup: I use WinSCP to access the Pi. Here is a look at the directory structure in usr/sbin: 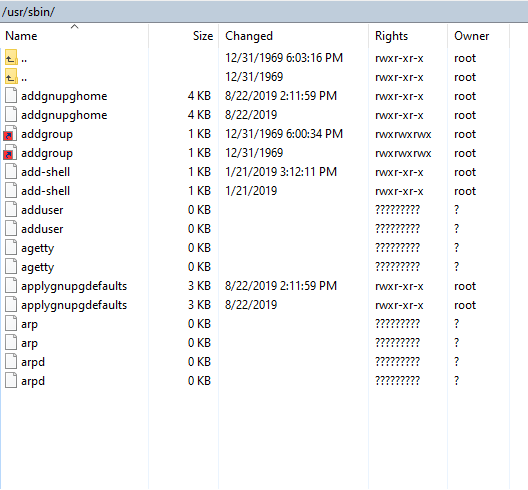 Note the question marks in the “Rights” column. I swear I haven’t fiddled around in this directory with WinSCP. I just had a look when bash complained that it couldn’t find ldconfig.

It seems like your SD card may be problematic.

Some SD cards are not genuine or have a lower capacity than advertised. Some simply fail over time.

Symptoms of SD cards not working correctly are:

Symptoms of counterfeit SD cards are:

Counterfeit cards are usually found on Amazon and eBay.

SD cards have a limited lifespan. I recommend you change SD card and suspect that issues will no longer persist with a good card. If you would like to be a good quality SD card purpose manufactured for OSMC, then you can find one in the Store.

OK. I will get another new card and try again, probably later today. I’ll buy a highly rated card from a local source so I can get it today.

I installed the 2020.10-1 image using the OSMC Windows installer last week. Is there any chance that image was corrupted or the installation process corrupted something? I see there is a checksum posted. Can you point me to a post that shows me how to use that checksum to validate the install if I use the OSMC installer?

The checksums are for validating the tar.gz file of the downloaded image, not once its been installed. If the install image was corrupt I would suspect issues to be apparent on first boot, not after a week.

There is a program called h2testw that can test to make sure SD cards are working and not reporting false capacity (aka fake cards). This requires a full write test so imaging the SD card with another program first is required if you want to retain the data it contains. This is a sensible path for both old cards that are suspect and brand new cards.

I bought a new Sandisk card from the local BestBuy so I could address the problems I’m having today. Long story short, I was able to re-install OSMC, install iperf3, and get OSMC configured. All seems good at this point, although acquiring a wireless network connection was quite a fiddly process for me. I’ll report on that separately in case anyone is interested.

The “bad” card I was using up to today is a 32GB PNY “Prime Performance” card. I replaced it with a SanDisk Ultra PLUS 32GB card.

There have been mixed reviews here on the SanDisk cards, so I’ll see what happens. I can’t be sure if the PNY card was bad or if I messed it up by unplugging the Pi to reboot it instead of issuing a sudo poweroff (or equivalent) command from the command line. Lesson learned though, I will not simply unplug to reboot, even if OSMC hangs, unless I can’t reboot from the command line.

For what it’s worth, I had been using a 32GB SanDisk card for the last four years, and I had used the “pull the plug” method to reboot many times, so I guess you could say I’ve had pretty good luck with SanDisk cards.

Thanks very much for the help and advice.