I am trying to use Vero4K+ as a Roon bridge.
This would be a rather cheap Roon Bridge with 5.1/7.1 multichannel and HiRes 24bits/192KHz capabilities. Probably the cheapest available. 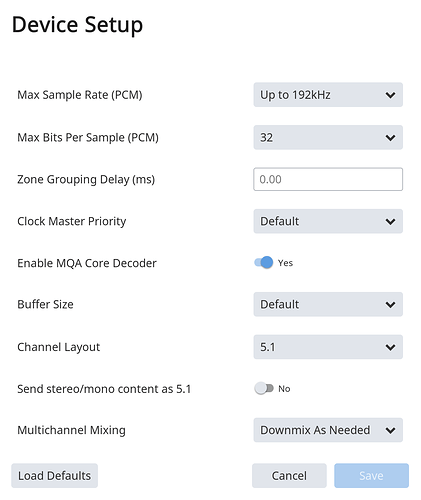 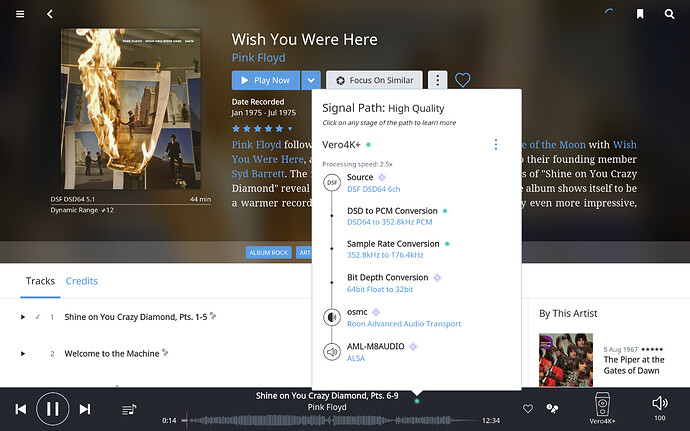 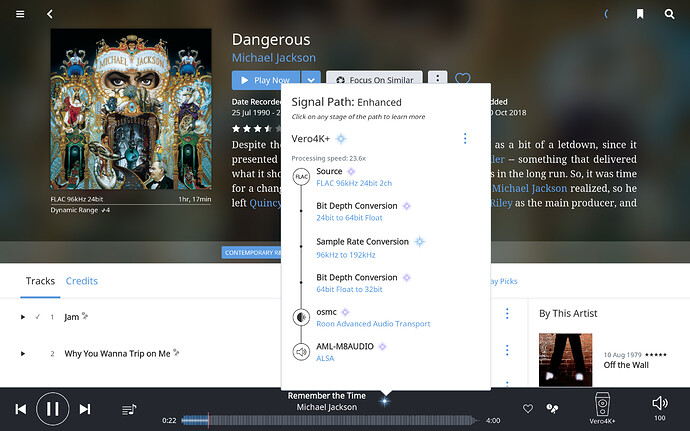 Unfortunately, I have two problems:

I already posted a message on Roon’s forum, with no luck (it was probably a thread too old).

I also already encountered the LFE-FC swapped channel issue on a RPi3. I was able to solve the problem and swap the channel using vcgencmd hdmi_channel_map.
Is there an equivalent on Vero4K+?

Here is the static sound recorded with my laptop:

For channel swapping, you could try a ALSA device which uses AMLM8AUDIO device 1 as slave and send roon to that.

I already tried that but it does not work, roon fails to initialize:

I had tried but plughw:0,1 does not work at all.

It might simply be a copy/paste issue but plughw:0,0 is being shown inside 66-99 double quotes. It should, of course, be inside standard (straight) double quotes ".

The double quotes are OK in asound.conf.

Are you saying that 66-99 quotes are ok in asound.conf?

On a similar note to @grahamh’s question, what happens if you try to play to hdmi2?

Are you saying that 66-99 quotes are ok in asound.conf?

On a similar note to @grahamh’s question, what happens if you try to play to hdmi2?

This works fine with aplay. Somehow I think that Roon bridge need a lower access to the hardware.

Which is why my initial question was “Is there something similar to vcgencmd hdmi_channel_map on Vero4K+?”, because mapping with asound.conf, although working fine with aplay, does not with Roon bridge. (hdmi2 does not even appear on roon configuration, I tricked it by manually editing configuration files…)

This is a case where we need to fix up problematic AMLogic behaviour in userspace for other applications than Kodi.

There’s not been a lot of demand for it, so it’s something that might not get much of a look at.

We could look at always allowing ALSA to open an arbitrary # of channels; and then fixing this in LD_PRELOAD by poking channel mapping sysfs attribute.

Edit: if multi-channel is working fine with aplay; then it’s a Roon issue.

Somehow I think that Roon bridge need a lower access to the hardware.

If it’s working feeding direct to hw:0,0 except only for the LFE/FC channels, I think we can switch those in just in the hdmi driver. Let me have a look at a sysfs way to do that.

As for the funny noises, you (may) need to know that the audio driver for DEV=0 advertises only 8-channel layouts. For fewer channels, the unused ones are marked NA. The driver mutes the unused channels based on the stream metadata. Our Kodi understands that but Roon may not. You may do better setting Roon to 7.1 and letting your AVR map to 5.1 if you have only 6 speakers.

I think what Sam is suggesting is to make it act more conventionally and advertise fewer channels to ALSA sources. That’s been in my ‘take too long’ basket for a while but if Roon (and volumio?) users want to upvote it we could have a closer look.

@benjaminbellamy I’ve also had my eye on Vero as a potential RAAT endpoint for my living room. I’m almost ready to pick one up and might just do so during the current sale.

Have you tried setting up Roon to use either the SPDIF or mini-jack outputs? I’d love to output 5.1 via optical (or even just stereo if worse came to worse, I think Dark Side of the Moon is the only album I have in 5.1) with Roon Bridge exclusively while Kodi uses HDMI exclusively.

It seems to me that using my receiver to switch between the two sources would be slicker than letting Kodi and Roon battle it out for the same output (presuming you need to pause anything Roon is playing to give up the output for Kodi and vice versa).

To that end does the SPDIF output also have channel swapping and static issues?