Any idea? Disk is not full.

I’ve moved your post to a new topic, to help and support.

What device are you running kodi on?

How many times has it crashed, have you tried opening that video again?

Yes, it crashes again.
After reboot it works.
But this night the TV start unfortunately again.

It seems to running out of memory as ActionA has reported, I can’t tell you much more as your first log is complete and there is nothing in the 2nd log. Is your network connection wired or wireless?

The network connection is wired and works (ssh).

The network connection is wired and works (ssh).

Either running out of memory or other issues.
try

So the crash is when playing a recording from tvheadend?
Are you able to play the same file through the file browser rather than PVR recordings interface?

The crash was by playing from the “PVR & TV”=>“Records” (in German “Aufnahmen”) Menu.

Ok in the Video Menu is playing possible.
After stopping it crashed in the PVR & TV Menu:
dmesg | paste-log
https://paste.osmc.tv/sepedapija
(out of memory) 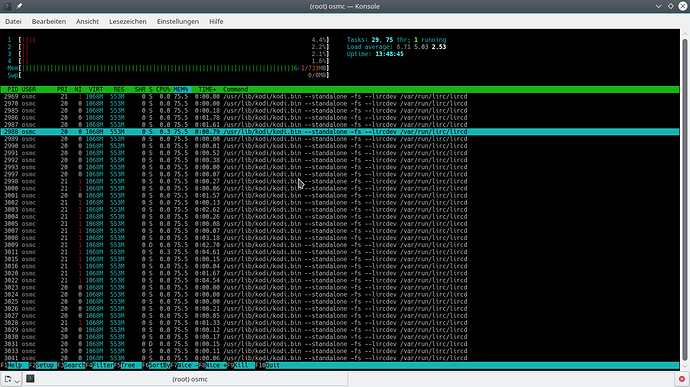