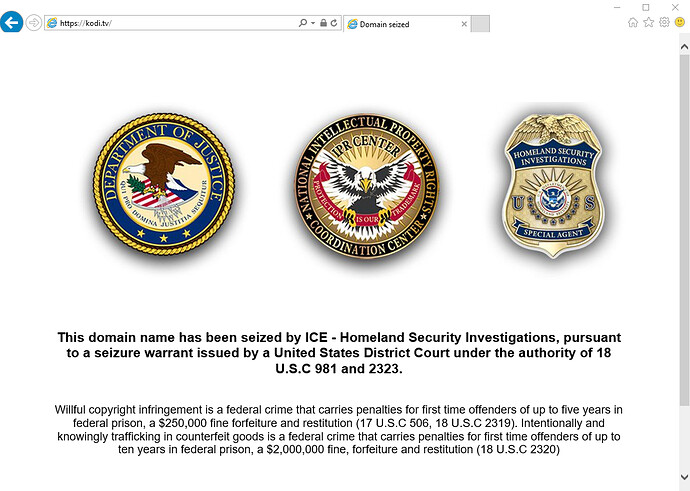 Its real, and now we are coming for you…

For a short time the “carries penalties” portion was a link to Rick Astleys “Never Gonna Give You Up”. As soon as I mentioned that in the IRC channel, this link disappeared. So you just need to wait out APRIL Fools day and all will be normal. It was also pointed out that the pages are still SSL protected and that they don’t tend to enable SSL when seizing a domain, as they wouldn’t be using it to collect private info.

Can anyone pay my bail?

As soon as I saw it was ICE ! LOL Is Kodi harboring illegal aliens ?

Well, at least the misuse of the first logo verified is forbidden by law, so either there is someone very brave and silly to make an April Fool’s Day prank out of it, see

or the Cloudfare-thing isn’t that secure as assumed.

That’s one hell of a April fools joke. Had me going there for a while!

This could be construed as parody and would most likely be exempt.

The site is back and I might say, has had a new design on the frontpage which is nice. Two new blog posts: Happy April, everyone. Did you miss us? :) Apologies if we scared you, but you'll have noticed that we've redecorated while you were looking the other way. Some might even suggest that taking the…

Now that our little April Fools' joke, which you can read more about here, is over, we're excited to announce that both kodi.tv and addons.kodi.tv have been fully updated and renewed! In addition…

You may have to hit F5 or CTRL+F5 to refresh your cache on the forum(I did).