I’ve tried twice to update to may release but I always get no boot on mu raspberry pi 2.

The boot partition is visible on my mac and the install.log doesn’t report any issue.

The weird thing is that some files are twins…how it is possibile?? 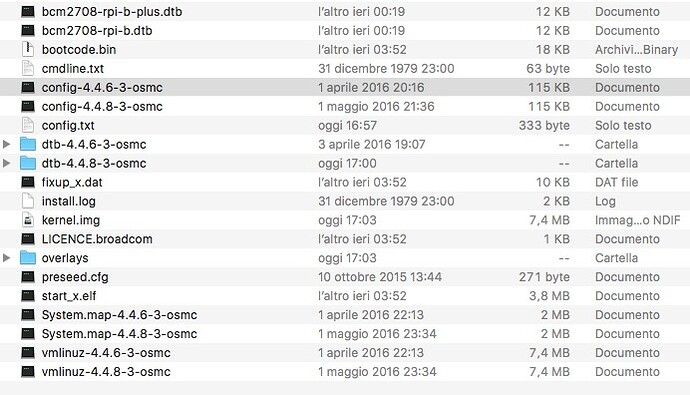 They are not twins. They are obviously named different. If it’s not booting, then what is it doing? Errors on the screen? What are they?

Ops… I have to go to an optician…
No boot: only black screen at start

And on your log files what’s obtain ? How do you use ? HDMI cable or RCA Output ?

Check your config.txt if for example it’s contain some line about wrong resolution or similar…

I use HDMI attached to an onkyo amply and my config.txt seems good. When I’ll be at home, I’ll post my install.log

mmmmmmmmm… i don’t know if it’s usefull but have you tryed to attach your Pi2 directly to tv and see what’s append ?

I thinks the best solution it’s tryed to reach the kodi.log and see what’s it’s reported inside it… you can reach you Pi2 like a SSH (telnet) session or similar ?

We need also to exclude all possibly situation like a harware issue… for example you can obtain a different sd card for tryed a clearly installation of osmc and see what’s appened (i thinks you can also tryed to re-install and previous version for see what’s append) ?
Or for example… you have tryed to chanche you power supply for your Pi2 ? A not very efficent power suplly i thinks can create similar problems like freezee…

Thank you for your reply.

I’m starting to thing that could be an hardware issue of my sd card, maybe not completely compatible.

In fact, I tried the update for the third time (after restoring my previously dd backup) and it succeeded.
The only different is that I launched a sudo apt-get autoremove before sudo apt-get dist-upgrade.

Here is my config.txt

There’s some value little different from my… i have:

I have also some value added respect this… i have:

and i have also:

@ActionA you can suggest some value ?

@zatarra77 ah… otherwise you have some double files… i thinks you need to run by SHH:

@ActionA if i make some errors please correct me