My OSMC has failed

I’m not new to OSMC but very new to posting on this forum. Never had an issue with OSMC/Kodi that I couldn’t solve thanks to Google or this forum. I’m also a Belgian so sorry for my poor English. I’ll try to respect the best practices to post an issue.

Everything started with the update of april. OSMC started to freeze and reboot when trying to update the library or setting a new skin… I had even empty settings menus. I decided to start from scratch on a new sd-card to avoid old addons issues. It helped for some hours till I decided to update the library and had the same issues freezings and reboots. And now I even have MyOSMC that crashes after kodi opens.
When I try to open it through the addons I have the following message:
“OSMC Settings Service failed to launch”

Except this issues I can watch my movies and shows without issues. But changing a skin or updating the library makes most of the time crash Kodi plus the fact that I can’t use MyOSMC.

Please could you help me? 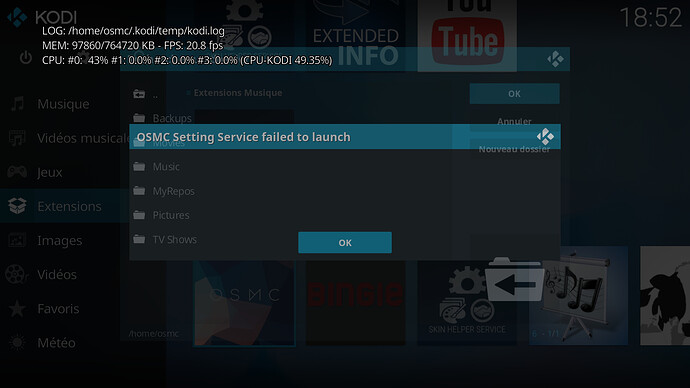 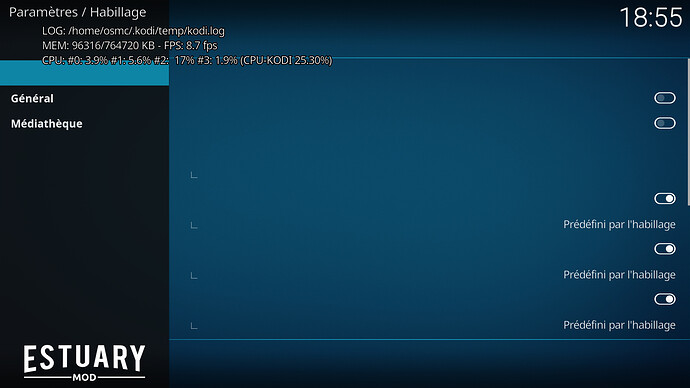 You have run out of memory. I assume this is either something to do with an add-on (or add-ons) that you have installed or perhaps bacause of the Estuary Mod skin.

You can test if it a problem with your configuration by running the following commands:

Thanks for your response indeed now I can open OSMC again but how can I know which add-on was responsable of this issue?
The skin is recently updated so not really something that hasn’t the support of kodi community (I know OSMC community isn’t Kodi Community

). Estuary is even a classic one.
Is there a way of tracking what is causing my issues?

Is there a way of tracking what is causing my issues?

Add one thing at a time until it breaks. Ideally it will be one bad add-on causing the problem, which is easiest to find, or a cumulative issue, which can be more difficult to resolve.

First thing first: thank you for your answer!
I tried what you proposed and installed only the skin Estuary Mod v2 (with the needed scripts except art beef) and it worked a day or 2 without having an issue but then after an update of the library it started again.

So I started to think that the issue was coming from my raspberry 3b and bought the Vero 4k. I installed the same scripts and skin and have no problems since a week! So I suppose that my pi has difficulties with the new Kodi and the skin.

Regards and thanks again!

I have no issue with the Vero 4k