Happy users for several months now. When I first received my vero 4k+ i tryed mounting my NAS with fstab but never got it to work. Unfortunatly I dont have the skills to troubleshoot myself so I gave up on it and just had added a normale NFS source to the vero 4k+. Up till now I had no issues realy with the throughputt and everything worked fine, but a recently acquired file seems to be causing some issues. The maximum bitrate is around 80 Mb/s.

So I decided to have another go at trying to mount the share with fstab, however still not succesfull and I need some help.

This tutorial is to help those who’d like to use NFS (Network File System - mostly used with Linux/Unix systems). It assumes that you already are sharing media files favourably on a NAS system that supports NFS shares (for how to setup NFS sharing e.g. on your NAS system, look for instructions by your system’s vendor). Why use /etc/fstab instead of Kodi’s built in NFS client? Using /etc/fstab is faster than Kodi’s own NFS client - it delivers better throughput and is more reliable (also than SM…

The issue I’m facing is that the mount just doesnt seem succesfull or something, but im not getting any errors. I’ll post here what I’ve done with screens and hopefully I can get some pointers. Keep in mind though that I am not technical and work through tutorials and pretty much need step by step pointers.

Firstly I edditted my fstab file. This is how it currently looks:

Secondly a screen from the SSH terminal and the steps I took using the tutorial. As you can see below when I try to enter the directory it just wont do it. It lets me enter the volume1 mount but I cant seem to access the video mount. A sidenode, the ‘video’ mount is the correct one. I guess I’ve also added ‘Video’ just in case I think but that one isnt correct. The path is /volume1/video. When trying to open /volume1/video/1 it just says no such device. 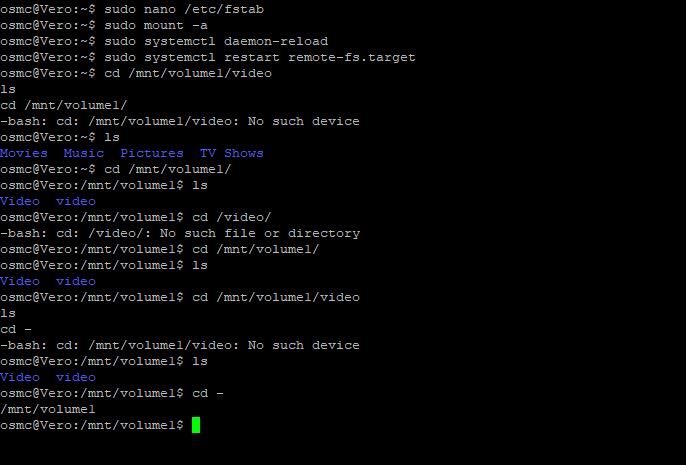 The rights to the folders should be correct, i’ve also added a screenshot of the synology with the settings. Keep in mind the language is in dutch but should be clear enough. Also 192.168.1.56 is the ip-adress of the vero. 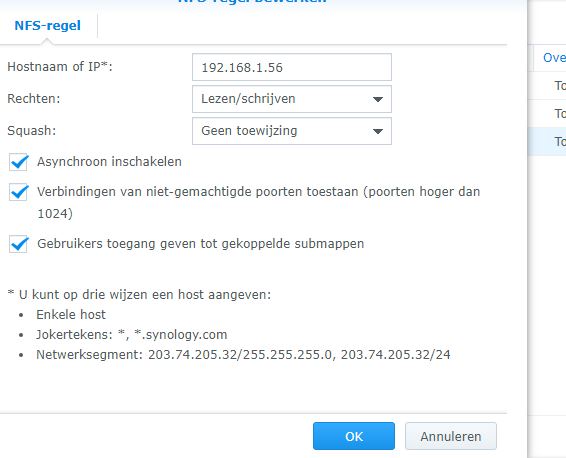 When I open the vero 4k+ through the normal user interface and try to add the root share it lets me go to volume 1 and displays the video share. But when I add it as share it freezes and after 1-2 minutes does nothing.

So I think there is something wrong in the NFS rules of the synology but I have no clue what it is. So any help is much appreciated.

Whats the output of:

You miss typed the command

Why are you putting the - after the e? Put it in front of the e

OMG that is so stupid. How did I not see that lmao.

That seems to indicate the OSMC device cannot see the NAS. Can you ping the NAS from OSMC?

What is the output of ifconfig On the OSMC device?

Have you got the firewall turned on the nas, is 192.1681.56 allowed in either for Mac/linux fiileserver (nfs) or All.

Possible stupid question but does the nas have a static IP is it set to dynamic/dhcp?

The NAS has static IP. Firewall of the NAS is turned off.

I can ping the NAS through SSH of the Vero. Not sure what you mean with ipconfig, are you expecting an output through SSH or just the normal config?

I just grabbed some stuff through SSH, if it contains stuff that I shouldnt post on the internet please let me know so i can delete it

The NAS has static IP. Firewall of the NAS is turned off.

Unfortunatly not succesfull though, error:

I also grabbed some logs:

Even with the correct IP address, your fstab won’t work.

I’d have chosen something like /mnt/video as the mount point, but that’s just a personal preference.

@dillthedog You are the man, its working now. Awesome! Thanks so much