Got my Marantz NR1711 today to hook up to my new Panny HZ980 OLED - 4K performance from the Vero is really nice.

However, as I explored my library, I found an entire series of Dr Who mkv’s that play with sound, but no picture. Couple of playback attempts recorded in the log below. The picture on the first attempt appeared briefly, then went, and the screen was totally blank (no Kodi on-screen controls etc). These have always been fine before. I switched out the Vero for a Pi, using the same HDMI cable and AVR input, and the episodes played fine. I have tried the HPD lock option (I don’t know what it does) but that did not help.

I seem to be a bit cursed with the Vero and Marantz AVR’s at present, hopefully the log will give someone some clues. I tried the special build Sam posted for my NR1603, but that did not fix it.

I’ll check out the logs tomorrow

Regarding the AVR issues we discussed previously: do you have an SD card / USB spare so that I can send you a version of OSMC for testing? This means you’ll be able to do some testing without disrupting your existing installation.

Thx, I have a USB stick that could be used.

Unless I’m missing something, I don’t see an attempt to play Dr Who in your logs, only an episode of ‘Porrige’

Unless I’m missing something, I don’t see an attempt to play Dr Who in your logs, only an episode of ‘Porrige’

Entries for episodes “Time of Angels” and “Flesh and Stone” are in the log and played with sound but no picture. I wondered if it was a 50Hz issue so tried Porridge, that was ok.

I just changed my Kodi GUI from 1080/60 to 1080/50, and initially the GUI came back, then the screen went blank. I switched the TV input away from the AVR and then back, and and the display returned briefly. This is similar in some ways to the issues I had with the NR1603 since the March OSMC update, though with the NR1603 the blank screen had no sound, and was more random. I’ve not had any issues with 24p content via the NR1711, but 1080/50 is pretty hopeless at present.

If the build I sent you previously doesn’t help, I’m not sure how it can be related to OSMC / Vero.

Just tried the Vero direct to the TV, and all is well. Indeed because the new TV and the AVR both support eARC, I’m getting hi-res audio passthrough. But I’d prefer to run via the AVR if possible.

Let’s revisit after some changes are made to fix the previously reported issue as I have a strong feeling they will be related.

Just found out that the blank screen issues with 1080/50 into my Marantz NR1711/Panny HZ980 are fixed if I enable “Force 422 colour subsampling” in the Vero settings. Tested with 3.14 and 4.9. If comparative logs would be helpful, please advise.

Try another cable, otherwise this is just a limitation of your AVR (hence the reason we added this option).

Since the source isn’t 444 anyway, is there any particular downside or benefit for transporting the 10bit 420 source as 10bit 444 vs 12bit 422? I am new to all this, but curious to understand.

The blank screen issue is very specific though. E.g. just tried a 1080/60 source, and playback was fine even with force 422 disabled. I suppose it could be an AVR firmware issue, but if 1080/60 works then surely it’s not the HDMI cable.

This suggests that it is indeed a bandwidth issue and could be related to your cable.

So does this mean that the default configuration of the Vero puts redundant strain on the connection bandwidth, for no benefit, if none of the content I play is native 444? I guess there are use cases where it’s beneficial?

You are correct - most video is distributed as 420 but it needs to be converted to 444 or RGB in order for any processing to be done on it. If we output 422 that involves another conversion/compromise so is to be avoided. The saving in bandwidth is only 20% so shouldn’t make a difference with modern kit and 18G cables.

It would be surprising if a brand new AVR (which presumably supports 4K60Hz) can’t manage 1080p60Hz. If you leave the 422 setting on, can you play all resolutions/refreshrates up to 4K60? 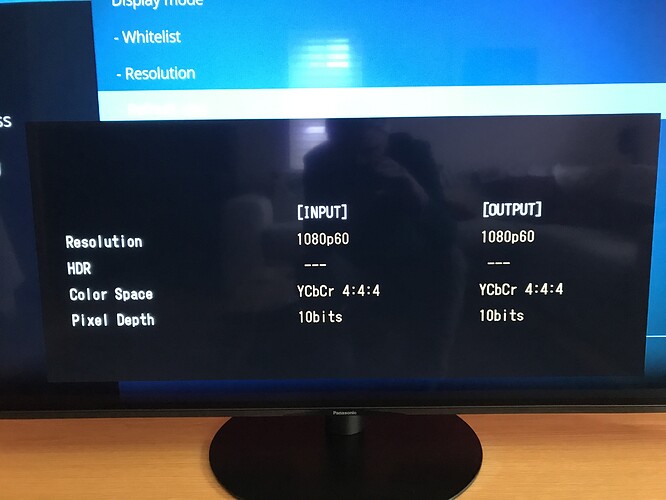 I think all we can do is file this under ‘quirks’. These 444/422 issues vary from AVR to AVR and TV to TV. I’ve not been able to discern any pattern that we could act on.

I guess we can’t rule out a glitch in the AVR’s firmware, it’s a new model. It looks like the workaround of enabling force 422 is benign so far, will have to wait and see. In any event, the Vero is not my go-to device for my 1080/50 mkv’s, as many of them are 50i encodings of native progressive material. For such material the Vero does not compete with MMAL-accelerated playback on a Pi with deinterlacing disabled. With the Vero I notice little moire effects that are entirely absent with the Pi, and the Vero isn’t up to software decoding 1080/50i, so the deinterlacing options via SW are moot. Perhaps one day this can be addressed in 4.9, or a future Vero device.