Raspberry Pi-2 model b after installing OSMC with KODI 18.9 while scanning in the new library got the good old CRASH !
Lots of Errors and Warnings
https://paste.osmc.tv/quwalunuhe

The Logs don’t show any Kodi Crash.
So does just the playback of the Video crash?

Full reboot not only a Kodi restart? That would indicate a power issue.
As mentioned your logs only shown a single start of Kodi so not crash.

It crashed and rebooted it self. I then went in turned off the Logger and rebooted it again.
Was hoping something in the log would show the problem.
I have over 6 Raspberry Pi’s 2 and 3 and have changed up power supplies. I use Cana power supplies 2 amps and 2.5 amps and the Raspberries are not reliable.
So I purchased a Vero+ 6 months ago it will go longer than any Raspberry but it crashes also. Only KODI on my Windows 7 will go months without crashing.

Is this a completely fresh install or are you copying over files from previous or other installs? If so, what exactly. It seems odd to me that you are having stability issues on so many different devices, as in there likely is some common link.

Upload logs after it reboot from the crash that is the only way we see crash reason in Kodi.old.log.
But as @darwindesign wrote if you have issues on more than one device it sounds more like a config/addon/library issue.

This was a fresh install from OSMC installer to SD Card. Stability issue would make sense but My Windows 7 works great and also purchased a BRIX box loaded LibreElec the only problem I have with Libre is a bad video driver that BRIX will not fix and only has the problem when using HDHomeRun Live TV with Comcast.

Here are logs after reboot on a crash

This latest log shows a lot of either network- or NFS-related errors, eg:

Do these files actually exist?

And quite a few “timeout waiting for buffer” messages, eg:

What’s the NFS server running on and have you checked the network performance with iperf3? 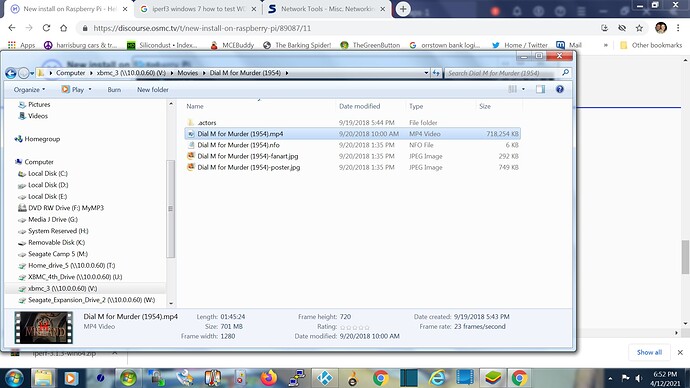 Yes and its on a WD Mycloud

Check network from your Pi to your NAS