As advised in the release candidate thread, the option to boost the centre channel option has gone missing from the audio options expert view on the Pi build for Leia. Not sure how this omission got through to production, can it be fixed?

indeed, it’s fine on the Vero, the option is present on the one Vero that I migrated but it’s missing on the Pi.

Strange – that’s an all series patch, so should work; but it’s possible that we need to change a string label.

It’s possible the setting is actually there – but just has the wrong name / description.

Here is a screenshot of my Pi running the official release posted this weekend, as you can see, the boost centre channel option has gone AWOL. 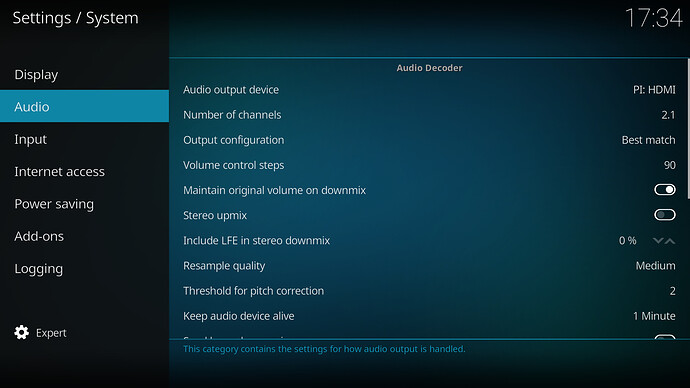 Looks like I conflated LFE with boost centre (apologies).
The boost centre channel is no longer part of RBP backports which is why it is not there.

That’s a shame if the centre boost is no longer available. The Pi is driving a Panasonic speaker bar that has limited power, and under 17.6 I’d found a nice combination of downmix/centre boost settings that gave excellent performance. Downgrading the Pi is not ideal and it would no longer be on the same shared database as the other clients. I could swap for a Vero but that has CEC issues with the speaker bar. I suppose I could start using the remote that was supplied with the Vero, just slightly more hassle for the family as they have to remember to switch remote between TV and Vero.

Why has this feature been dropped? I guess there’s no point in me switching the Pi to LE as the option will be missing there as well?

I’m sure it can be re-added.

Were you able to fix this in the meantime?

Boost centre option still missing on the Pi. The family has complained as there is now a marked difference in dialogue volume compared to stereo sources. Not a disaster, just annoying that this feature regression has occurred with K18.

I can’t agree it is disaster for me.
Who is deciding if a feature can be dropped in a new version?

As I see new versions getting worse and worse in the last few years.

You can stay with an older version if necessary.

To everyone who is affected.
This option is available in the menu during the play.
It must be set one by one for each movie, at least it can be set.

For the older version: I don’t think it is good idea to use old version due to misssing security fixes.