A few people here have been tinkering with launching Parsec or Moonlight, etc out of OSMC/Kodi on their Raspberry Pi for a while now. Well about five months ago I started putting together a few shell scripts that I could launch through OSMC’s editable menus, but it was still a very manual process to update the scripts if my server number changed. Well that all changes now. This week I put in a ton of hours to learn some Python and how to produce my first Kodi addon. 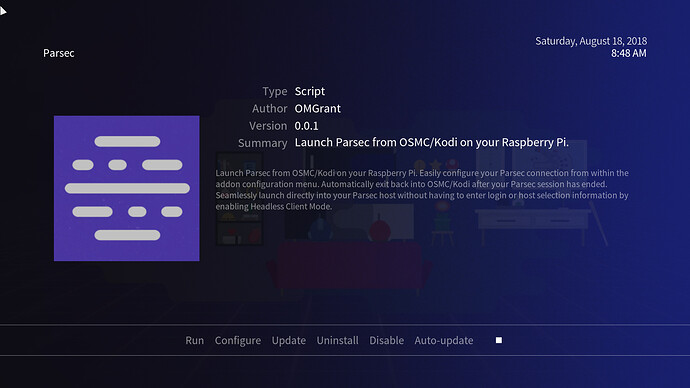 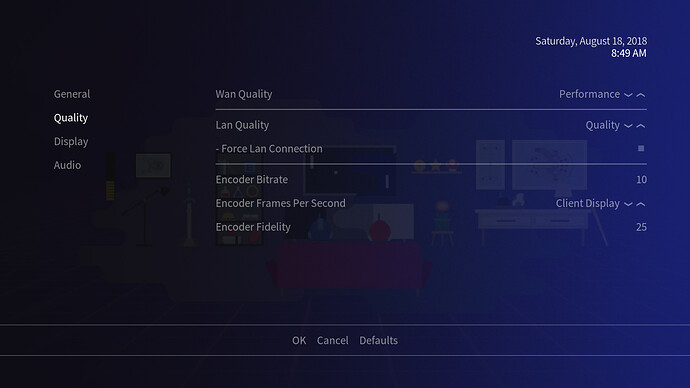 OSMC/Kodi Addon: Parsec Launcher
Parsec is a game streaming application used to play video games remotely across a conntected network from a system in the cloud to your home computer. OSMC (short for Open Source Media Center) is a Linux distribution based on Debian that brings Kodi to a variety of devices. This addon brings the two together to create a seamless experience.

Look forward to get some testers and some feedback!

first thanks for this great addon idea!

Is there any optional possibility to configure your addon settings without the inside options in Kodi?

The reason i ask is, that nothing happens, when i try to start your addon. I tried the addon with actual Rasbian OS and OSMC. Parsec and kodi services are running well. Unfortunately i cant start Parsec directly from Kodi.

Because of that i would be really happy if your addon would work for me.

Hope that anybody got an idea for me!
Thanks in advance!
DSN

Thanks for trying it out. If you could, please re-download and install the addon from the link provided at http://dev.grantgarrison.com

An additional command snuck into the shell script the addon launches that was intended for use in other platforms that apparently didn’t play well like I had thought it would.

If you’re curious about what the working parts are doing, check out the source page and look inside the resources directory for those shell scripts. The addon is basically launching a new command line outside of Kodi and passing all the variables down to it so the kodi service can be killed to free up mouse and keyboard interaction then relaunched from the the new command line once Parsec exits.

Thanks for your fast reply and information about that!

Very strange, still got no luck to start parsec with your addon. I reloaded and tried your addon on both OS with no success. Also remove the userdata folder to make sure the old addon was deleted. If I write commands from your shell scripts, inside command line, parsec runs well.

Maybe somebody else got that problem?

@Deisen, perhaps it’s something else. Did you change the username and password from osmc/osmc? I have been pondering how to account for this.

Will this work on the vero 4k, or is it only for raspberry pi based hardware?