Not booting after December update

i use the november build right now.

10 posts were split to a new topic: Dependency failed for Local File Systems after December update

Im not sure if anyone has looked at this already. I know it hangs on the splash screen and I know it hangs before loading the network or the usb dongle because I can’t ssh to it. Would it help and is there away to get a log of its boot activity and send to this board to look at. Im not sure how this is achieved but I bet it shows in all the boot up where it failed to load or initialize something.

Just an update on sd card status. My system is on a samsung evo 16 GB card. I have success with unplugging and plugging the power back in several times which I hate to do. I feel like I might as well blow in the sd card slot and fiddle with how I set the card into the port, NES reference

really, a machine mainly running linux and linux partitions and the file you download cant be read on ubuntu. Im going to try to slide the file over to the pi and hope it works. Im too lazy to reach 5 feet and do it on my girlfriends windows laptop.

I am using a rpi2 with SanDisk Ultra 32 GB MicroSDHC UHS-I. I did not know about this issue and I updated two days ago (this implies that I should hav the new PI kernel (4.3.3-2)). The issue is that the rpi2 boots only to the first OSMC screen and then shows a sad smiley face.

I connected the SD card to my Macbook’s card reader and it shows two partitions - fat and ext, and as expected mounts only the fat one. In the fat partition there is no /boot/ folder. However there is a config.txt file, but it is read-only and I cannot save the files after adding the new line. Thus my question is if I need access to the ext partition, or this fat partition is the right one. If fat is the right one, how come I don’t have the /boot/ folder. If it is okay that I don’t have the /boot/ folder, how do I save the config.txt file (I don’t have permissions to save it).

I really hope someone can help me - honestly this situation is unacceptable.

Can you try using a PC? Otherwise you may need to mount the partition RW, not sure if Mac needs special treatment there, but I doubt it as our installer doesn’t do anything special for preseeding

Thanks for the solution!

Thanks for the quick reply. Unfortunately I do not have access to a Windows PC. Can you please elaborate what you mean by “Otherwise you may need to mount the partition RW” and how to achieve this in Mac OS X? Thanks

I don’t have a Mac so can’t help much with that one. I would recommend posting a screenshot of what you see so another OS X user can perhaps help

I did it in mac os - when you insert card in your computer, /boot would mount as new drive so only put mmc-overlay.dtb into overlays folder.

A post was split to a new topic: Stuck on Rainbow screen

The mmc-overlay.dtb file is already in the Overlay folder. Any other suggestions? Thanks!

Alright. This is how I see the OSMC SD card - the FAT partition is mounted. 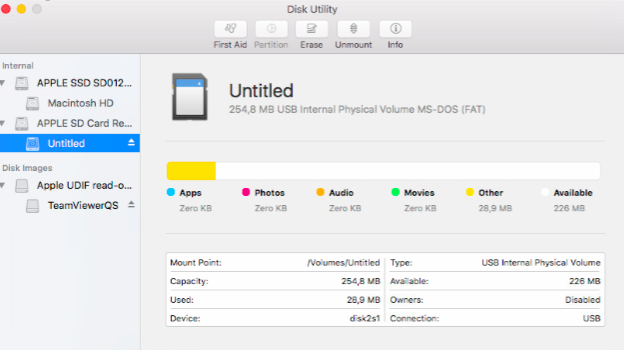 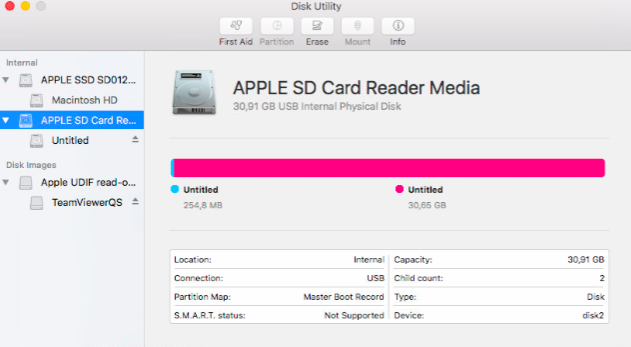 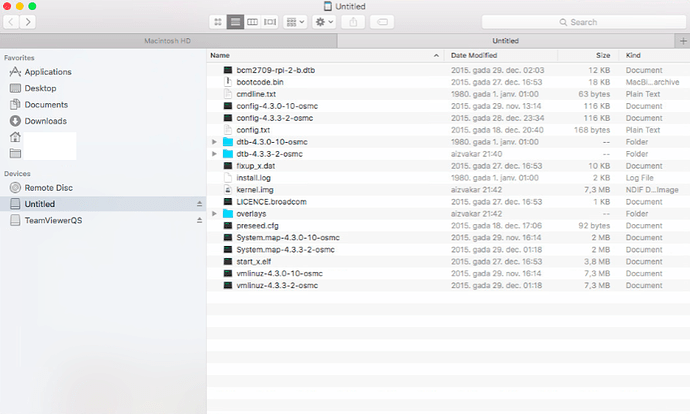 [quote][package] [kernel-osmc] Raspberry Pi: SDHost issues seem slightly more abundant than expected. Provide a kernel with MMC SD driver as default as a contingency if we need to push
[/quote]

Ok, thanks.
I put the sdhost-overlay in my config.txt …