So I have been using Hyperion with OSMC and Kodi for a few months with no real problem.
After the last Kodi update the system couldn’t boot anymore and showed a lot of ext-4-fs errors (journal interrupted): 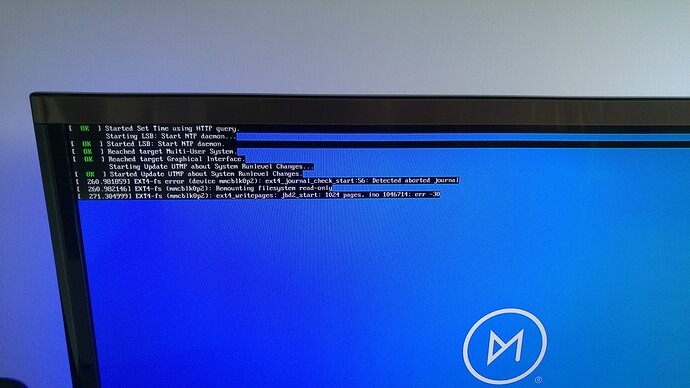 So I thought that the SD Card is damaged. Removing it and trying to fix it on another system with fsck brought nothing. So I reinstalled everything using OSMC 2017.07-1 and it all worked - until I installed hyperion.

If hyperion is running - the system cannot boot, there are ext4-fs errors, connection vis SSH is impossible, the system is completely unresponsive. If I remove the SD card and delete the configuration file from /etc/hyperion, so that the service cannot start, everything works fine.

Once I put the json file back, everything crashes again.

I have not changed the json file since February. It seems that something makes hyperion incompatible with the new OSMC release… It worked fine with previous releases.

Any help would be much appreciated… Thank you!

P.S.: As the system is unresponsive and there is no way to connect via SSH I cannot generate an error report.

I have not changed the json file since February. It seems that something makes hyperion incompatible with the new OSMC release… It worked fine with previous releases.

I doubt that there is any problem with Hyperion. Your SD Card is broken. Yes a reinstall of OSMC worked but that just means that certain parts of the card are working but doesn’t mean the whole card is ok.
If you want to test the card before you by a new one use a proper program that checks the card from A to Z

ok, but is still very suspicious that the system works perfectly with the hyperion service stopped and that it immediately crashes when I start the service. I would try it out directly with another SD card, just to be sure.

Can you suggest a good program to check the current SD Card?

Can you suggest a good program to check the current SD Card?

Suggest to do a full test with h2testw

Or badblocks if you have a Linux system.

First of all, the current SD card had no errors:

Secondly, I tried with another brand new SD card - still the same.

So clearly there is something in the newer versions of OSMC that lets hyperion crash the system.

This sounds like it could be power related. @icefire, have you tried a different power supply?

Yes, I have. Normally I use the LED power supply for the Raspberry as well but I tried powering the Raspberry with a phone charger just to see if anything happens - and it doesn’t.

Furthermore I don’t understand why there are no problems with 2017.03-1 but it doesn’t work with the current version.

I tried powering the Raspberry with a phone charger

It’s well known that phone chargers will not supply proper power to a Pi.

Furthermore I don’t understand why there are no problems with 2017.03-1 but it doesn’t work with the current version.

Try a real power supply and see what happens.

It is not power related. I am using a 15A power supply which is more than twice what I need to power the LEDs and a simple Raspberry. The phone charger was 2,5A which also worked and brought no change. I am now powering the Raspberry back from the 15A power supply.

It is not power related.

One issue that needs to be overcome if we’re to see what’s happening is that by default OSMC doesn’t store its system journal on disk, so later analysis isn’t possible.

I see that you have a Linux Mint system, so, if you want, we can modify the failing system and with luck view its system journal. To do this you need to do the following:

1 Place the SD card of a non-working installation into the Mint system and mount /dev/mmcblk0p2.

2 Edit file /<mountpoint>/etc/systemd/journald.conf and changet the line #Storage=auto to Storage=persistent Save the change and unmount the partition.

3 Move the SD card over to the Pi and let it run for as long as you think necessary. Then power off the Pi, move the SD card back to the Mint machine and again mount /dev/mmcblk0p2.

4 The Pi’s system journal should (!) then be viewable by running
sudo journalctl --file=/<mountpoint>/var/log/journal/<long hex string>/system.journal. Note that the file is in binary format and is only root accessible, so you might want to redirect the output to a readable text file for uploading to the OSMC paste bin.

Thank you! This is indeed an intricate idea, I will try it out.

In the meantime I seem to have gotten it to work with some info from the hyperion forums. Apparently with a new version of OSMC the DMA channel the LED driver was using through the analog audio PWM was assigned to - guess what - the SD card, which of course results in all sorts of sd-card-related errors. So changing the DMA channel actually did the trick - for now.

Thank you all for your help!

LOL. I guess you can keep Plan B for another day.

So I have been using Hyperion with OSMC and Kodi for a few months with no real problem.After the last Kodi update the system couldn't boot anymore and showed a lot of ext-4-fs errors (journal interrupted):So I thought that the SD Card is damaged.…

Full details there - root cause is the rpi_281x library that Hyperion supports.