Hi all,
is it possible to edit the shutdown script responsible for delaying shutdown beacuse it’s terminating the movie that was played, or is it ‘umount’ script that waits.
The script echoes the message about terminating with defined time … first it is 1min30sec, after that if fails to terminate in that time waits for 3 mins. thx! 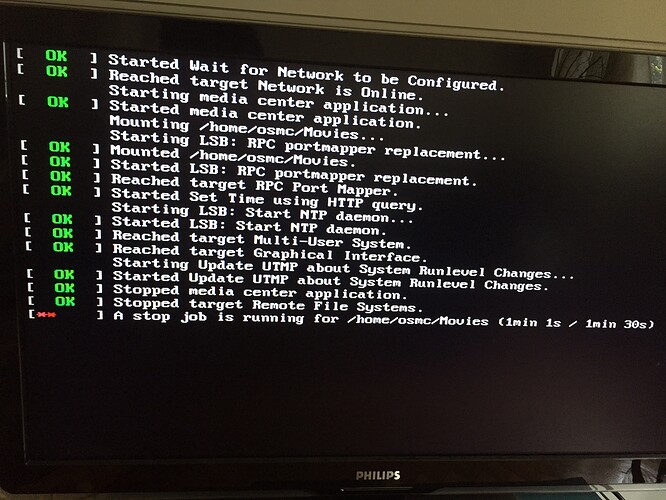 Please show your /etc/fstab - you probably don’t have the right mount options to be compatible with systemd. (systemd requires different mount options in fstab than most other init systems)

On previous, alpha version of osmc i could mount it as user ‘osmc uid 1000 / gid 1000’ after reinstalling new system, not alpha, every time i tred to mount as osmc, system would tried to mount as root or some other user.
Not that i think it matters with this issue.

file system that is mounted is Mac OS Extended (Journaled) (HFS plus). Maybe because of that?

Hard to say - I have not tried sshfs on OSMC so without setting up a special test environment to test it I don’t have any answers off the top of my head. You may just need to experiment with the mount options.

BTW it’s very easy to set up an nfs server on Mac OS - it’s built in, and I use it on my Mac Mini. It is probably a much better option than sshfs because nfs was designed to be a network filesystem, whereas sshfs tacks a virtual file system onto the scp protocol.

Simply create an /etc/exports file then restart the service with ‘sudo nfsd restart’. The export options are a little bit different than Linux nfsd, here is my exports file as an example:

ok thx for info. Sorry for my lack of knowledge,
how do you mount an nfs? can i still use fstab for that?

after that sudo mount -a
i get

mount.nfs: mounting 192.168.5.100:/Volumes/DUMPSTER2/Movies/ failed, reason given by server: No such file or directory