I seem to have got my Vero 4K in a state where it will only display the "Please Standby’ message. I had a problem in that SSH’ing wouldn’t accept the (never changed) default password so I tried to remove/reinstall the SSH package but although it seemed to remove successfully it wouldn’t allow me to add it again. I’m totally green at such stuff so decided restoring the firmware might be a simpler route forward. Followed the wiki instructions, tried several SD cards/usb sticks but each time it booted back to Kodi so finally tried the rename to ‘recovery’/toothpick method - this failed but also left the machine constantly displaying "Please Standby’ for a few seconds then losing it’s output. The light on the box remains Blue throughout. 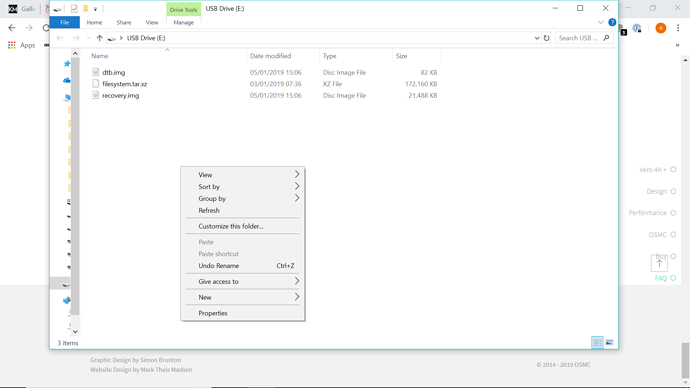 Hi Sam, thanks for the recovery image. I wasn’t sure where best to continue with my problem so I’ve replied to your email as well - let me know if one is preferable. With you saying the 'toothpick method’​ I wasn’t sure if you also meant renaming ‘kernel.img’ to ‘recovery.img’ so I tried both (screenshots attached). With the toothpick pressed in and kept in - regardless of .img naming the light on the front is red as power is connected changing to blue within a second. The ‘Please Standby’ logo appears almost instantly, stays on screen for about 3 seconds, followed by a black screen for 6 seconds, and then changing to ‘check signal cable’ (same as if I’ve pulled the HDMI out or pulled the units power). Releasing the toothpick after about 40 seconds changes nothing. Finally, regardless of whether the toothpick is in or not, slightly after 1 minute the light turns red. Hope this makes sense.

I replied to your support ticket.

It’s unclear to me why the device isn’t working. If you see a blue light then it is booting. I’d suggest trying another HDMI cable.

It’s unclear what changes you made to the device. Could you go through them step by step?